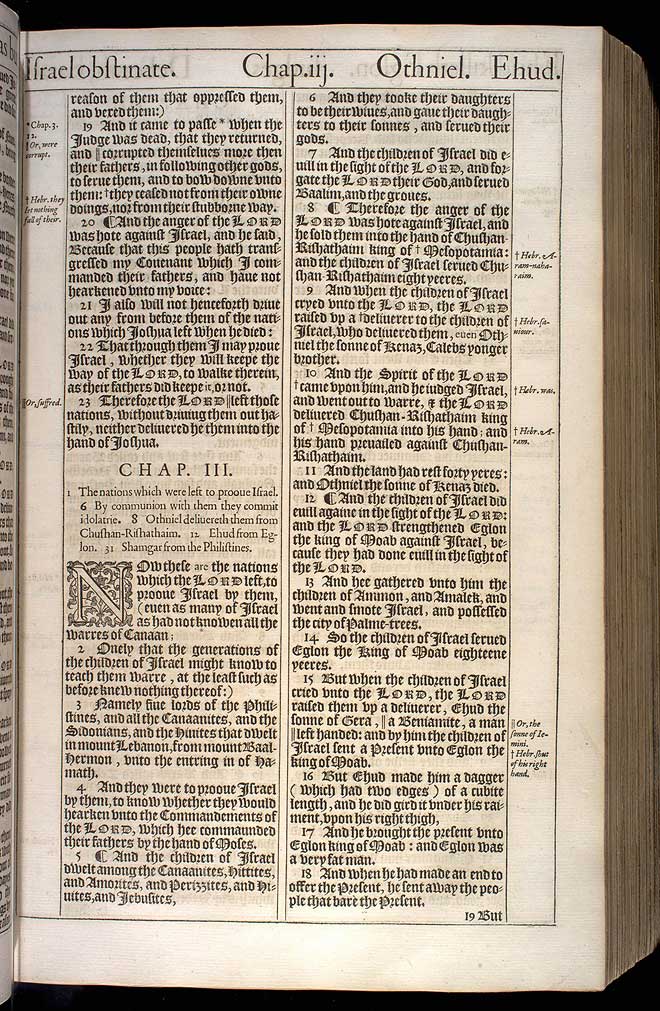 View this Iudges chapter 3 scan at a larger size

1 The nations which were left to prooue Israel. 6 By communion with them they commit idolatrie. 8 Othniel deliuereth them from Chushan-Rishathaim. 12 Ehud from Eglon. 31 Shamgar from the Philistines.

1 Now these are the nations which the Lord left, to prooue Israel by them, (euen as many of Israel as had not knowen all the warres of Canaan;

2 Onely that the generations of the children of Israel might know to teach them warre, at the least such as before knew nothing thereof:)

3 Namely fiue lords of the Philistines, and all the Canaanites, and the Sidonians, and the Hiuites that dwelt in mount Lebanon, from mount Baal-Hermon, vnto the entring in of Hamath.

4 And they were to prooue Israel by them, to know whether they would hearken vnto the Commandements of the Lord, which hee commaunded their fathers by the hand of Moses.

5 ¶ And the children of Israel dwelt among the Canaanites, Hittites, and Amorites, and Perizzites, and Hiuites, and Iebusites,

7 And the children of Israel did euill in the sight of the Lord, and forgate the Lord their God, and serued Baalim, and the groues.

11 And the land had rest forty yeres: and Othniel the sonne of Kenaz died.

13 And hee gathered vnto him the children of Ammon, and Amalek, and went and smote Israel, and possessed the city of Palme-trees.

14 So the children of Israel serued Eglon the King of Moab eighteene yeeres.

16 But Ehud made him a dagger (which had two edges) of a cubite length, and he did gird it vnder his raiment, vpon his right thigh,

17 And he brought the present vnto Eglon king of Moab: and Eglon was a very fat man.

18 And when he had made an end to offer the Present, he sent away the people that bare the Present.

19 But hee himselfe turned againe from the quarries that were by Gilgal, and said, I haue a secret errand vnto thee, O king: who said, Keepe silence. And all that stood by him, went out from him.19

20 And Ehud came vnto him, and he was sitting in a Summer parlour, which hee had for himselfe alone: And Ehud said, I haue a message from God vnto thee. And he arose out of his seat.20

21 And Ehud put forth his left hand, and tooke the dagger from his right thigh, and thrust it into his belly.

22 And the haft also went in after the blade: and the fatte closed vpon the blade, so that hee could not drawe the dagger out of his belly, and the dirt came out.22

23 Then Ehud went forth through the porche, and shut the doores of the parlour vpon him, and locked them.

24 When he was gone out, his seruants came, and when they saw, that behold, the doores of the parlour were locked, they said, Surely he couereth his feet in his Summer chamber.24

25 And they taried till they were ashamed: and behold, he opened not the doores of the parlour, therefore they tooke a key, and opened them: and behold, their lord was fallen downe dead on the earth.

26 And Ehud escaped while they taried: and passed beyond the quarries, and escaped vnto Seirath.

27 And it came to passe when hee was come, that hee blew a trumpet in the mountaine of Ephraim, and the children of Israel went downe with him from the mount, & he before them.

28 And hee said vnto them, Follow after me: for the Lord hath deliuered your enemies the Moabites into your hand. And they went downe after him, and tooke the foords of Iordan toward Moab, and suffered not a man to passe ouer.

29 And they slewe of Moab at that time about ten thousand men, all lusty, and all men of valour, and there escaped not a man.29

30 So Moab was subdued that day vnder the hand of Israel: and the land had rest fourescore yeeres.

31 ¶ And after him was Shamgar the sonne of Anath, which slew of the Philistines sixe hundred men with an oxe goad, and he also deliuered Israel.