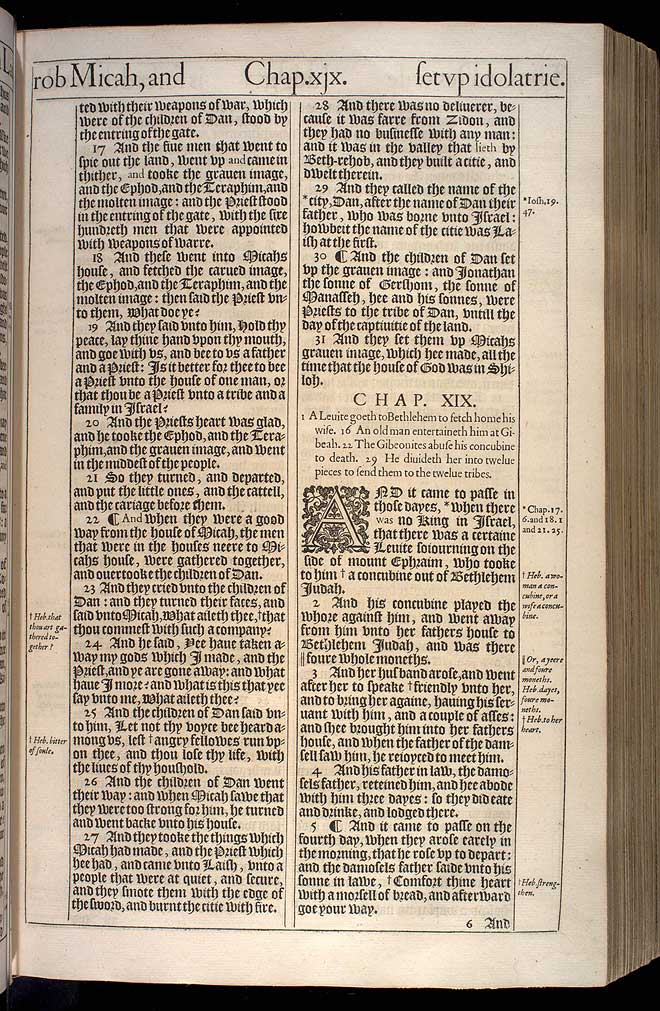 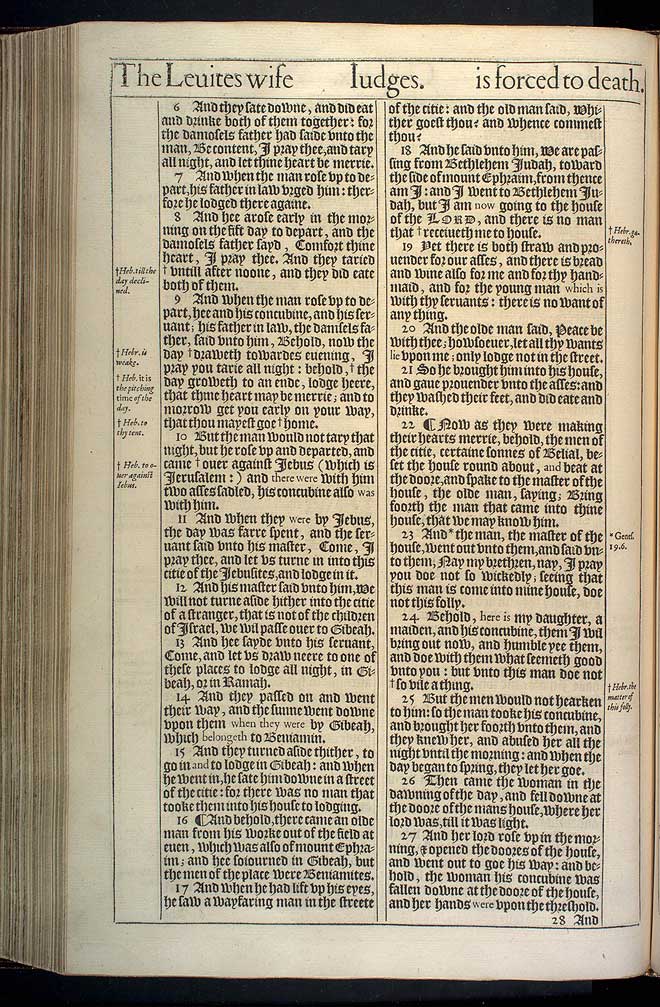 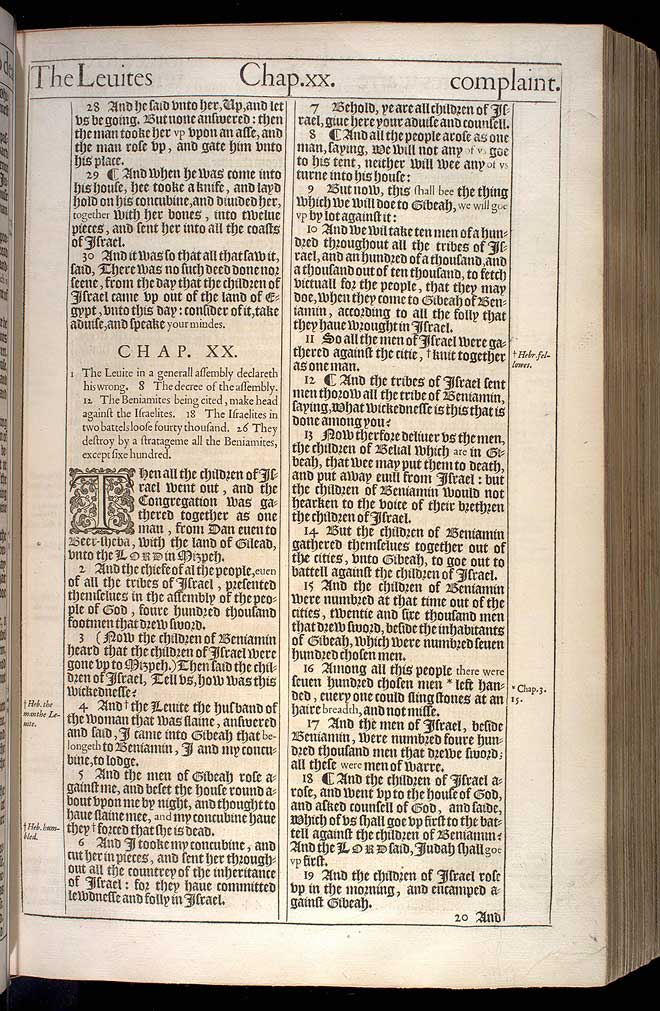 View this Iudges chapter 19 scan at a larger size

1 A Leuite goeth to Bethlehem to fetch home his wife. 16 An old man entertaineth him at Gibeah. 22 The Gibeonites abuse his concubine to death. 29 He diuideth her into twelue pieces to send them to the twelue tribes.

1 And it came to passe in those dayes, when there was no King in Israel, that there was a certaine Leuite soiourning on the side of mount Ephraim, who tooke to him a concubine out of Bethlehem Iudah.1

2 And his concubine played the whore against him, and went away from him vnto her fathers house to Bethlehem Iudah, and was there foure whole moneths.2

3 And her husband arose, and went after her to speake friendly vnto her, and to bring her againe, hauing his seruant with him, and a couple of asses: and shee brought him into her fathers house, and when the father of the damsell saw him, he reioyced to meet him.3

4 And his father in law, the damosels father, reteined him, and hee abode with him three dayes: so they did eate and drinke, and lodged there.

5 ¶ And it came to passe on the fourth day, when they arose earely in the morning, that he rose vp to depart: and the damosels father saide vnto his sonne in lawe, Comfort thine heart with a morsell of bread, and afterward goe your way.5

6 And they sate downe, and did eat and drinke both of them together: for the damosels father had saide vnto the man, Be content, I pray thee, and tary all night, and let thine heart be merrie.

7 And when the man rose vp to depart, his father in law vrged him: therfore he lodged there againe.

8 And hee arose early in the morning on the fift day to depart, and the damosels father sayd, Comfort thine heart, I pray thee. And they taried vntill after noone, and they did eate both of them.8

9 And when the man rose vp to depart, hee and his concubine, and his seruant; his father in law, the damsels father, said vnto him, Behold, now the day draweth towardes euening, I pray you tarie all night: behold, the day groweth to an ende, lodge heere, that thine heart may be merrie; and to morrow get you early on your way, that thou mayest goe home.9

10 But the man would not tary that night, but he rose vp and departed, and came ouer against Iebus (which is Ierusalem:) and there were with him two asses sadled, his concubine also was with him.10

11 And when they were by Iebus, the day was farre spent, and the seruant said vnto his master, Come, I pray thee, and let vs turne in into this citie of the Iebusites, and lodge in it.

12 And his master said vnto him, We will not turne aside hither into the citie of a stranger, that is not of the children of Israel, we will passe ouer to Gibeah.

13 And hee sayde vnto his seruant, Come, and let vs draw neere to one of these places to lodge all night, in Gibeah, or in Ramah.

14 And they passed on and went their way, and the sunne went downe vpon them when they were by Gibeah, which belongeth to Beniamin.

15 And they turned aside thither, to go in and to lodge in Gibeah: and when he went in, he sate him downe in a street of the citie: for there was no man that tooke them into his house to lodging.

16 ¶ And behold, there came an olde man from his worke out of the field at euen, which was also of mount Ephraim; and hee soiourned in Gibeah, but the men of the place were Beniamites.

17 And when he had lift vp his eyes, he saw a wayfaring man in the streete of the citie: and the old man said, Whither goest thou? and whence commest thou?

18 And he said vnto him, We are passing from Bethlehem Iudah, toward the side of mount Ephraim, from thence am I: and I went to Bethlehem Iudah, but I am now going to the house of the Lord, and there is no man that receiueth me to house.18

19 Yet there is both straw and prouender for our asses, and there is bread and wine also for me and for thy handmaid, and for the young man which is with thy seruants: there is no want of any thing.

20 And the olde man said, Peace be with thee; howsoeuer, let all thy wants lie vpon me; only lodge not in the street.

21 So he brought him into his house, and gaue prouender vnto the asses: and they washed their feet, and did eate and drinke.

22 ¶ Now as they were making their hearts merrie, behold, the men of the citie, certaine sonnes of Belial, beset the house round about, and beat at the doore, and spake to the master of the house, the olde man, saying; Bring foorth the man that came into thine house, that we may know him.

23 And the man, the master of the house, went out vnto them, and said vnto them, Nay my brethren, nay, I pray you doe not so wickedly; seeing that this man is come into mine house, doe not this folly.23

24 Behold, here is my daughter, a maiden, and his concubine, them I wil bring out now, and humble yee them, and doe with them what seemeth good vnto you: but vnto this man doe not so vile a thing.24

25 But the men would not hearken to him: so the man tooke his concubine, and brought her foorth vnto them, and they knew her, and abused her all the night vntil the morning: and when the day began to spring, they let her goe.

26 Then came the woman in the dawning of the day, and fell downe at the doore of the mans house, where her lord was, till it was light.

28 And he said vnto her, Up, and let vs be going. But none answered: then the man tooke her vp vpon an asse, and the man rose vp, and gate him vnto his place.

29 ¶ And when he was come into his house, hee tooke a knife, and layd hold on his concubine, and diuided her, together with her bones, into twelue pieces, and sent her into all the coasts of Israel.

30 And it was so that all that saw it, said, There was no such deed done nor seene, from the day that the children of Israel came vp out of the land of Egypt, vnto this day: consider of it, take aduise, and speake your mindes.