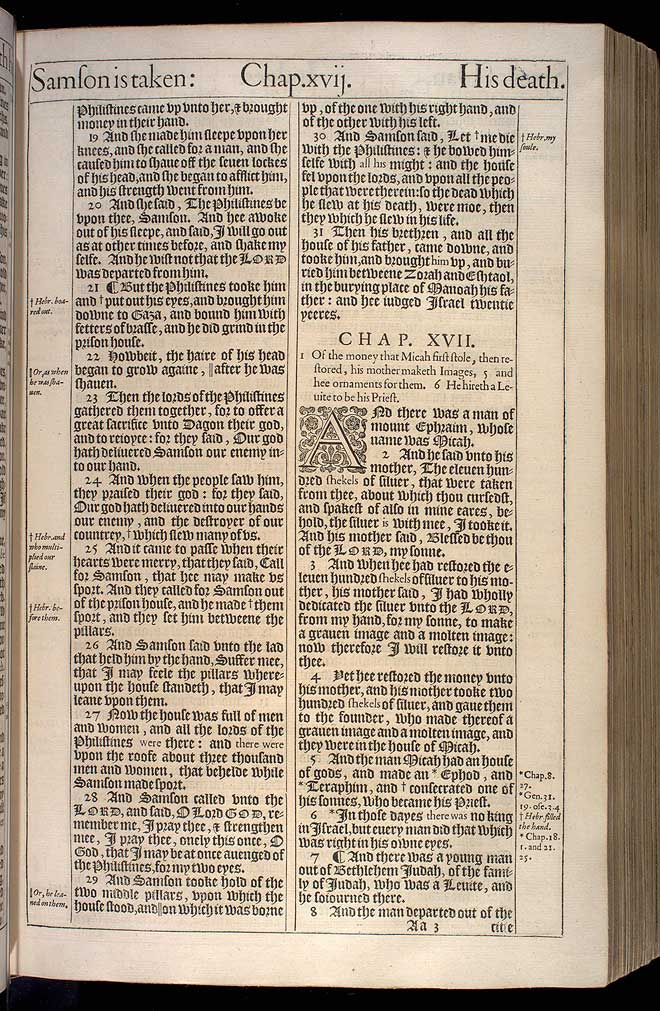 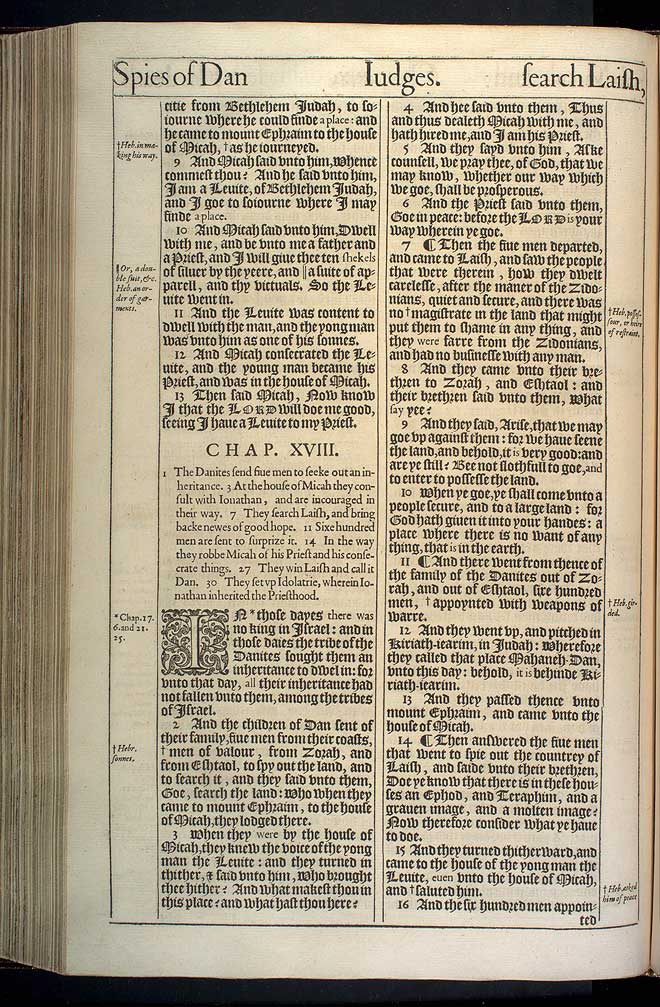 View this Iudges chapter 17 scan at a larger size

1 Of the money that Micah first stole, then restored, his mother maketh Images, 5 and hee ornaments for them. 6 He hireth a Leuite to be his Priest.

1 And there was a man of mount Ephraim, whose name was Micah.

2 And he said vnto his mother, The eleuen hundred shekels of siluer, that were taken from thee, about which thou cursedst, and spakest of also in mine eares, behold, the siluer is with mee, I tooke it. And his mother said, Blessed be thou of the Lord, my sonne.

3 And when hee had restored the eleuen hundred shekels of siluer to his mother, his mother said, I had wholly dedicated the siluer vnto the Lord, from my hand, for my sonne, to make a grauen image and a molten image: now therefore I will restore it vnto thee.

4 Yet hee restored the money vnto his mother, and his mother tooke two hundred shekels of siluer, and gaue them to the founder, who made thereof a grauen image and a molten image, and they were in the house of Micah.

5 And the man Micah had an house of gods, and made an Ephod, and Teraphim, and consecrated one of his sonnes, who became his Priest.5

6 In those dayes there was no king in Israel, but euery man did that which was right in his owne eyes.6

7 ¶ And there was a young man out of Bethlehem Iudah, of the family of Iudah, who was a Leuite, and he soiourned there.

8 And the man departed out of the citie from Bethlehem Iudah, to soiourne where he could finde a place: and he came to mount Ephraim to the house of Micah, as he iourneyed.8

9 And Micah said vnto him, Whence commest thou? And he said vnto him, I am a Leuite, of Bethlehem Iudah, and I goe to soiourne where I may finde a place.

10 And Micah said vnto him, Dwell with me, and be vnto me a father and a Priest, and I will giue thee ten shekels of siluer by the yeere, and a suite of apparell, and thy victuals. So the Leuite went in.10

11 And the Leuite was content to dwell with the man, and the yong man was vnto him as one of his sonnes.

12 And Micah consecrated the Leuite, and the young man became his Priest, and was in the house of Micah.

13 Then said Micah, Now know I that the Lord will doe me good, seeing I haue a Leuite to my Priest.