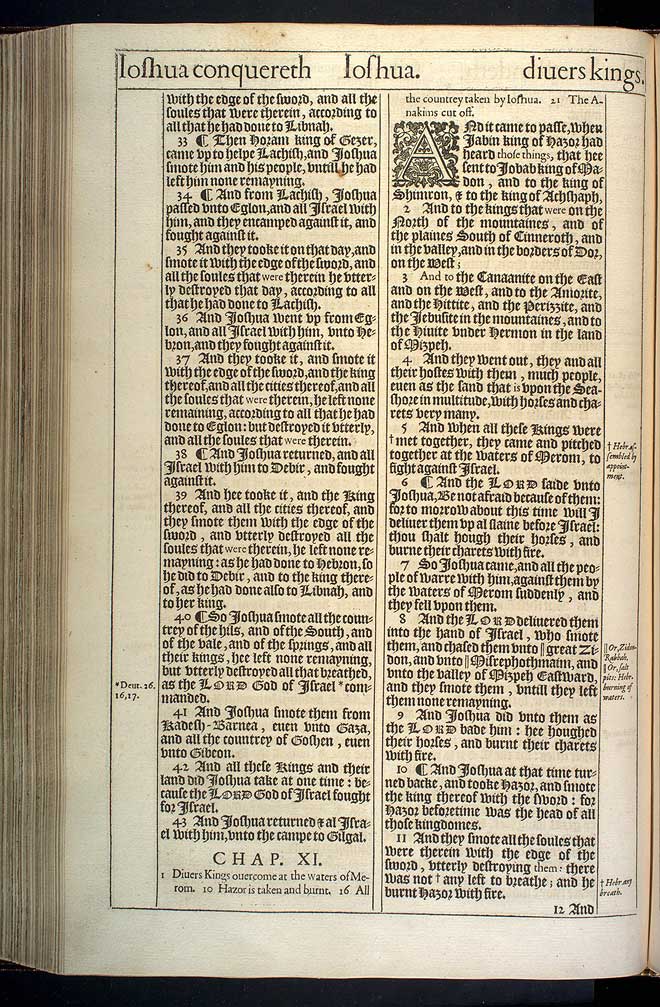 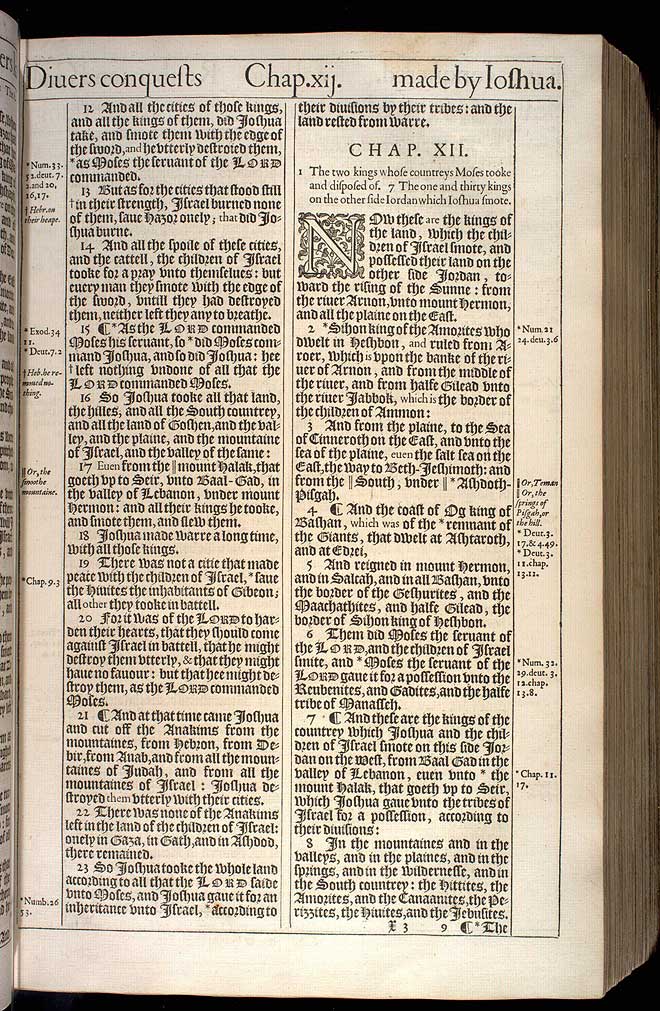 View this Ioshua chapter 11 scan at a larger size

1 Diuers Kings ouercome at the waters of Merom. 10 Hazor is taken and burnt. 16 All the countrey taken by Ioshua. 21 The Anakims cut off.

1 And it came to passe, when Iabin king of Hazor had heard those things, that hee sent to Iobab king of Madon, and to the king of Shimron, & to the king of Achshaph,

2 And to the kings that were on the North of the mountaines, and of the plaines South of Cinneroth, and in the valley, and in the borders of Dor, on the West;

4 And they went out, they and all their hostes with them, much people, euen as the sand that is vpon the Seashore in multitude, with horses and charets very many.

5 And when all these Kings were met together, they came and pitched together at the waters of Merom, to fight against Israel.5

6 ¶ And the Lord saide vnto Ioshua, Be not afraid because of them: for to morrow about this time will I deliuer them vp al slaine before Israel: thou shalt hough their horses, and burne their charets with fire.

7 So Ioshua came, and all the people of warre with him, against them by the waters of Merom suddenly, and they fell vpon them.

8 And the Lord deliuered them into the hand of Israel, who smote them, and chased them vnto great Zidon, and vnto Misrephothmaim, and vnto the valley of Mizpeh Eastward, and they smote them, vntill they left them none remayning.8

9 And Ioshua did vnto them as the Lord bade him: hee houghed their horses, and burnt their charets with fire.

10 ¶ And Ioshua at that time turned backe, and tooke Hazor, and smote the king thereof with the sword: for Hazor beforetime was the head of all those kingdomes.

11 And they smote all the soules that were therein with the edge of the sword, vtterly destroying them: there was not any left to breathe; and he burnt Hazor with fire.11

12 And all the cities of those kings, and all the kings of them, did Ioshua take, and smote them with the edge of the sword, and he vtterly destroied them, as Moses the seruant of the Lord commanded.12

13 But as for the cities that stood still in their strength, Israel burned none of them, saue Hazor onely; that did Ioshua burne.13

14 And all the spoile of these cities, and the cattell, the children of Israel tooke for a pray vnto themselues: but euery man they smote with the edge of the sword, vntill they had destroyed them, neither left they any to breathe.

17 Euen from the mount Halak, that goeth vp to Seir, vnto Baal-Gad, in the valley of Lebanon, vnder mount Hermon: and all their kings he tooke, and smote them, and slew them.17

18 Ioshua made warre a long time, with all those kings.

19 There was not a citie that made peace with the children of Israel, saue the Hiuites the inhabitants of Gibeon; all other they tooke in battell.19

22 There was none of the Anakims left in the land of the children of Israel: onely in Gaza, in Gath, and in Ashdod, there remained.

23 So Ioshua tooke the whole land according to all that the Lord saide vnto Moses, and Ioshua gaue it for an inheritance vnto Israel, according to their diuisions by their tribes: and the land rested from warre.23