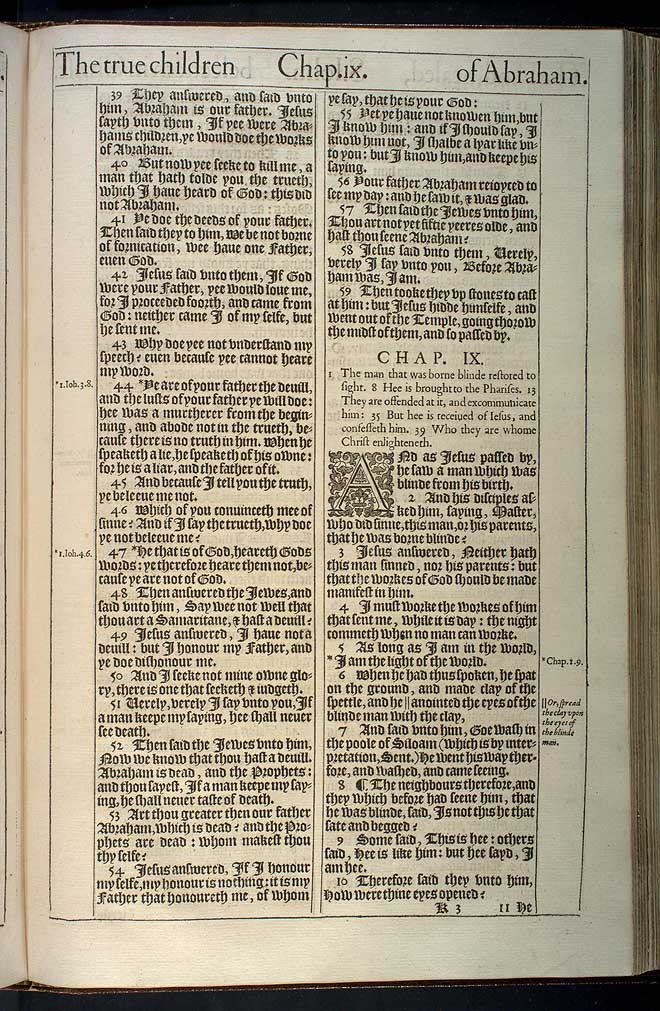 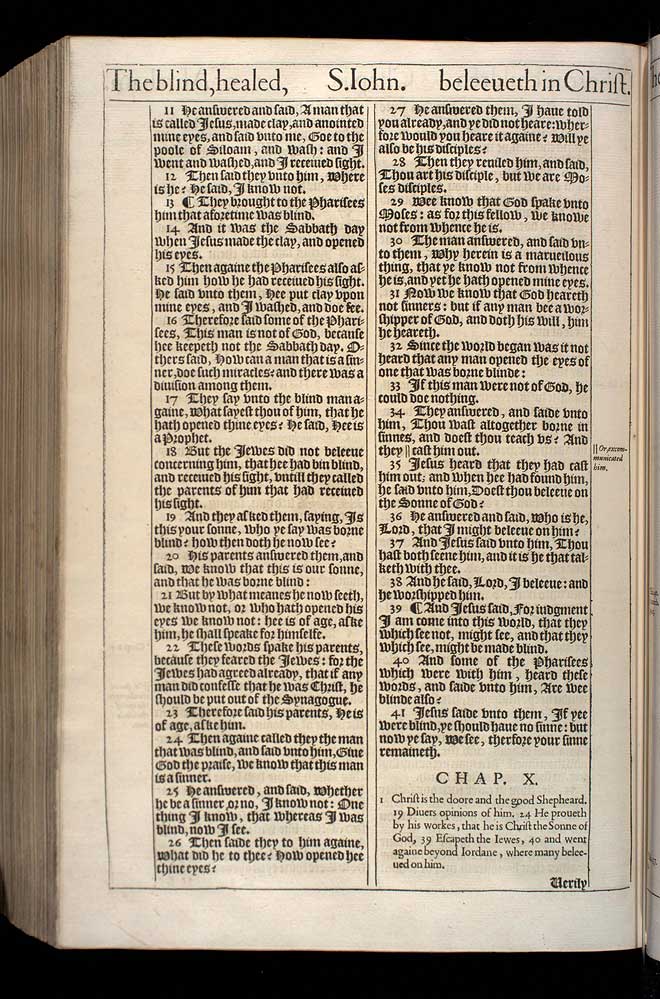 View this Iohn chapter 9 scan at a larger size

1 The man that was borne blinde restored to sight. 8 Hee is brought to the Pharises. 13 They are offended at it, and excommunicate him: 35 But hee is receiued of Iesus, and confesseth him. 39 Who they are whome Christ enlighteneth.

1 And as Iesus passed by, he saw a man which was blinde from his birth.

2 And his disciples asked him, saying, Master, who did sinne, this man, or his parents, that he was borne blinde?

3 Iesus answered, Neither hath this man sinned, nor his parents: but that the workes of God should be made manifest in him.

4 I must worke the workes of him that sent me, while it is day: the night commeth when no man can worke.

6 When he had thus spoken, he spat on the ground, and made clay of the spettle, and he anointed the eyes of the blinde man with the clay,6

7 And said vnto him, Goe wash in the poole of Siloam (which is by interpretation, Sent.) He went his way therfore, and washed, and came seeing.

8 ¶ The neighbours therefore, and they which before had seene him, that he was blinde, said, Is not this he that sate and begged?

10 Therefore said they vnto him, How were thine eyes opened?

11 He answered and said, A man that is called Iesus, made clay, and anointed mine eyes, and said vnto me, Goe to the poole of Siloam, and wash: and I went and washed, and I receiued sight.

13 ¶ They brought to the Pharisees him that aforetime was blind.

14 And it was the Sabbath day when Iesus made the clay, and opened his eyes.

15 Then againe the Pharisees also asked him how he had receiued his sight. He said vnto them, Hee put clay vpon mine eyes, and I washed, and doe see.

16 Therefore said some of the Pharisees, This man is not of God, because hee keepeth not the Sabbath day. Others said, How can a man that is a sinner, doe such miracles? and there was a diuision among them.

17 They say vnto the blind man againe, What sayest thou of him, that he hath opened thine eyes? He said, Hee is a Prophet.

19 And they asked them, saying, Is this your sonne, who ye say was borne blind? how then doth he now see?

20 His parents answered them, and said, We know that this is our sonne, and that he was borne blind:

21 But by what meanes he now seeth, we know not, or who hath opened his eyes we know not: hee is of age, aske him, he shall speake for himselfe.

22 These words spake his parents, because they feared the Iewes: for the Iewes had agreed already, that if any man did confesse that he was Christ, he should be put out of the Synagogue.

23 Therefore said his parents, He is of age, aske him.

24 Then againe called they the man that was blind, and said vnto him, Giue God the praise, we know that this man is a sinner.

25 He answered, and said, Whether he be a sinner or no, I know not: One thing I know, that whereas I was blind, now I see.

26 Then saide they to him againe, What did he to thee? How opened hee thine eyes?

27 He answered them, I haue told you already, and ye did not heare: wherfore would you heare it againe? Will ye also be his disciples?

28 Then they reuiled him, and said, Thou art his disciple, but we are Moses disciples.

29 Wee know that God spake vnto Moses: as for this fellow, we knowe not from whence he is.

30 The man answered, and said vnto them, Why herein is a marueilous thing, that ye know not from whence he is, and yet he hath opened mine eyes.

31 Now we know that God heareth not sinners: but if any man bee a worshipper of God, and doth his will, him he heareth.

32 Since the world began was it not heard that any man opened the eyes of one that was borne blinde:

33 If this man were not of God, he could doe nothing.

34 They answered, and saide vnto him, Thou wast altogether borne in sinnes, and doest thou teach vs? And they cast him out.34

35 Iesus heard that they had cast him out; and when hee had found him, he said vnto him, Doest thou beleeue on the Sonne of God?

36 He answered and said, Who is he, Lord, that I might beleeue on him?

37 And Iesus said vnto him, Thou hast both seene him, and it is he that talketh with thee.

38 And he said, Lord, I beleeue: and he worshipped him.

40 And some of the Pharisees which were with him, heard these words, and saide vnto him, Are wee blinde also?

41 Iesus saide vnto them, If yee were blind, ye should haue no sinne: but now ye say, We see, therfore your sinne remaineth.