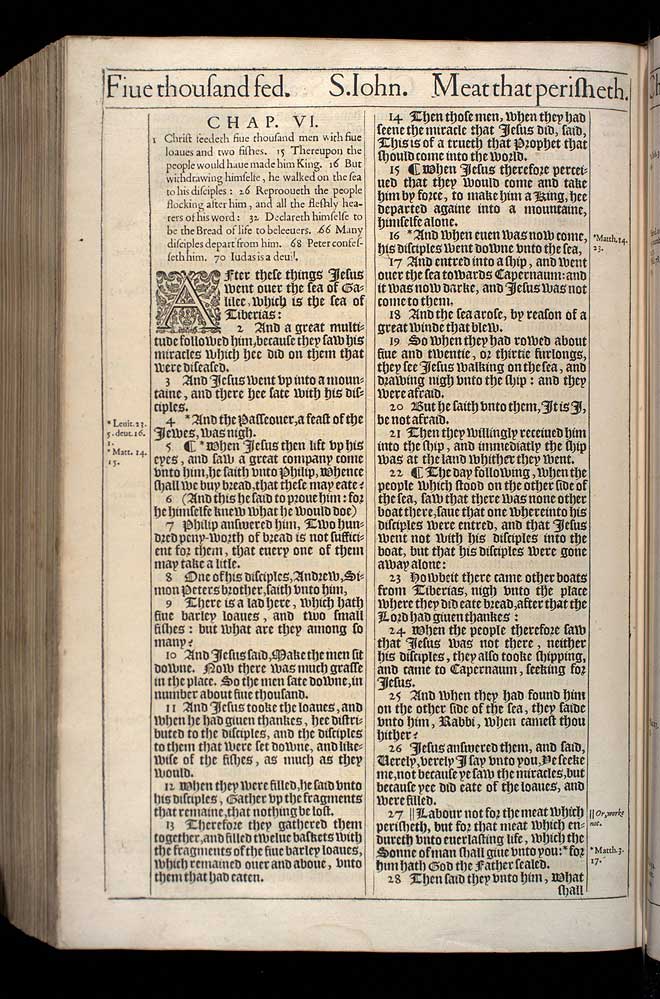 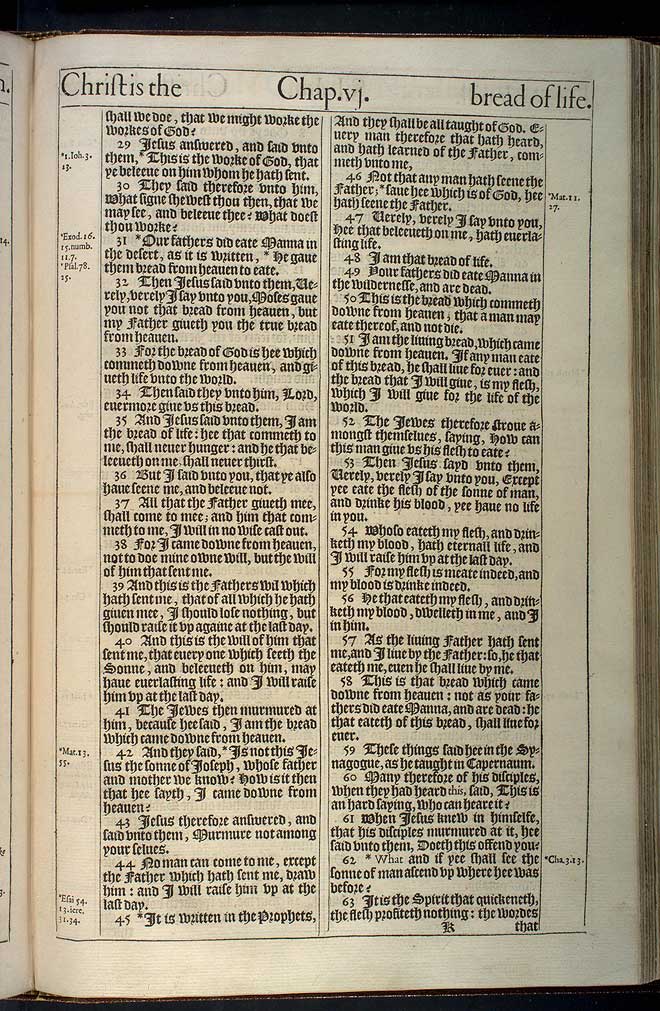 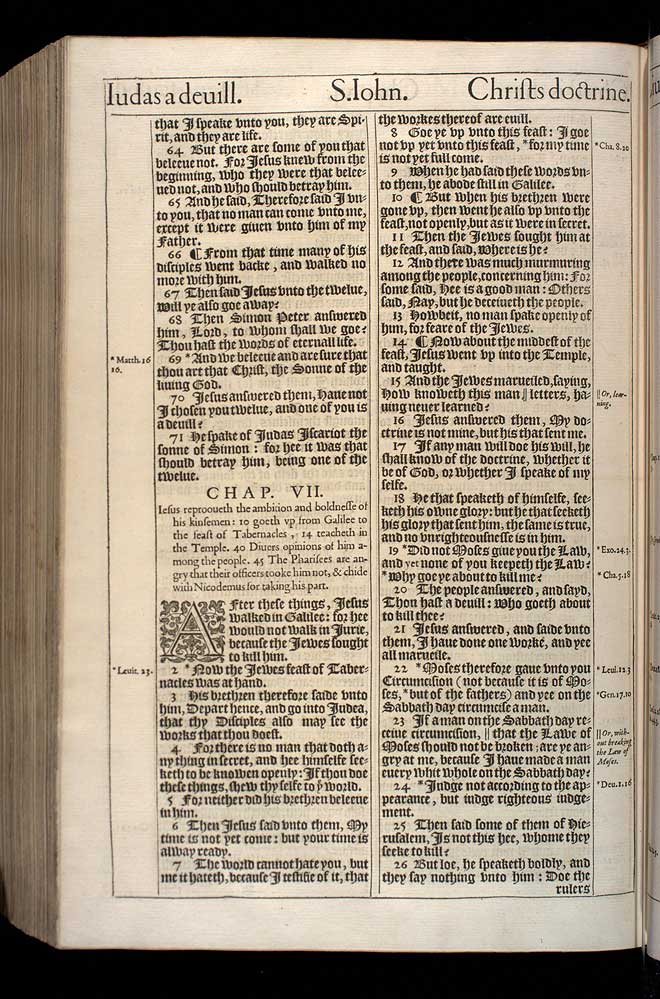 View this Iohn chapter 6 scan at a larger size

1 Christ feedeth fiue thousand men with fiue loaues and two fishes. 15 Thereupon the people would haue made him King. 16 But withdrawing himselfe, he walked on the sea to his disciples: 26 Reprooueth the people flocking after him, and all the fleshly hearers of his word: 32 Declareth himselfe to be the Bread of life to beleeuers. 66 Many disciples depart from him. 68 Peter confesseth him. 70 Iudas is a deuil.

1 After these things Iesus went ouer the sea of Galilee, which is the sea of Tiberias:

2 And a great multitude followed him, because they saw his miracles which hee did on them that were diseased.

3 And Iesus went vp into a mountaine, and there hee sate with his disciples.

4 And the Passeouer, a feast of the Iewes, was nigh.4

5 ¶ When Iesus then lift vp his eyes, and saw a great company come vnto him, he saith vnto Philip, Whence shall we buy bread, that these may eate?5

6 (And this he said to proue him: for he himselfe knew what he would doe)

7 Philip answered him, Two hundred peny-worth of bread is not sufficient for them, that euery one of them may take a litle.

8 One of his disciples, Andrew, Simon Peters brother, saith vnto him,

9 There is a lad here, which hath fiue barley loaues, and two small fishes: but what are they among so many?

10 And Iesus said, Make the men sit downe. Now there was much grasse in the place. So the men sate downe, in number about fiue thousand.

11 And Iesus tooke the loaues, and when he had giuen thankes, hee distributed to the disciples, and the disciples to them that were set downe, and likewise of the fishes, as much as they would.

12 When they were filled, he said vnto his disciples, Gather vp the fragments that remaine, that nothing be lost.

13 Therefore they gathered them together, and filled twelue baskets with the fragments of the fiue barley loaues, which remained ouer and aboue, vnto them that had eaten.

14 Then those men, when they had seene the miracle that Iesus did, said, This is of a trueth that Prophet that should come into the world.

15 ¶ When Iesus therefore perceiued that they would come and take him by force, to make him a King, hee departed againe into a mountaine, himselfe alone.

16 And when euen was now come, his disciples went downe vnto the sea,16

17 And entred into a ship, and went ouer the sea towards Capernaum: and it was now darke, and Iesus was not come to them.

18 And the sea arose, by reason of a great winde that blew.

19 So when they had rowed about fiue and twentie, or thirtie furlongs, they see Iesus walking on the sea, and drawing nigh vnto the ship: and they were afraid.

21 Then they willingly receiued him into the ship, and immediatly the ship was at the land whither they went.

23 Howbeit there came other boats from Tiberias, nigh vnto the place where they did eate bread, after that the Lord had giuen thankes:

24 When the people therefore saw that Iesus was not there, neither his disciples, they also tooke shipping, and came to Capernaum, seeking for Iesus.

25 And when they had found him on the other side of the sea, they saide vnto him, Rabbi, when camest thou hither?

26 Iesus answered them, and said, Uerely, verely I say vnto you, Ye seeke me, not because ye saw the miracles, but because yee did eate of the loaues, and were filled.

27 Labour not for the meat which perisheth, but for that meat which endureth vnto euerlasting life, which the Sonne of man shall giue vnto you: for him hath God the Father sealed.27

28 Then said they vnto him, What shall we doe, that we might worke the workes of God?

29 Iesus answered, and said vnto them, This is the worke of God, that ye beleeue on him whom he hath sent.29

30 They said therefore vnto him, What signe shewest thou then, that we may see, and beleeue thee? What doest thou worke?

31 Our fathers did eate Manna in the desert, as it is written, He gaue them bread from heauen to eate.31

33 For the bread of God is hee which commeth downe from heauen, and giueth life vnto the world.

34 Then said they vnto him, Lord, euermore giue vs this bread.

36 But I said vnto you, that ye also haue seene me, and beleeue not.

37 All that the Father giueth mee, shall come to mee; and him that commeth to me, I will in no wise cast out.

38 For I came downe from heauen, not to doe mine owne will, but the will of him that sent me.

39 And this is the Fathers wil which hath sent me, that of all which he hath giuen mee, I should lose nothing, but should raise it vp againe at the last day.

40 And this is the will of him that sent me, that euery one which seeth the Sonne, and beleeueth on him, may haue euerlasting life: and I will raise him vp at the last day.

41 The Iewes then murmured at him, because hee said, I am the bread which came downe from heauen.

42 And they said, Is not this Iesus the sonne of Ioseph, whose father and mother we know? How is it then that hee sayth, I came downe from heauen?42

43 Iesus therefore answered, and said vnto them, Murmure not among your selues.

44 No man can come to me, except the Father which hath sent me, draw him: and I will raise him vp at the last day.

45 It is written in the Prophets, And they shall be all taught of God. Euery man therefore that hath heard, and hath learned of the Father, commeth vnto me,45

47 Uerely, verely I say vnto you, Hee that beleeueth on me, hath euerlasting life.

49 Your fathers did eate Manna in the wildernesse, and are dead.

50 This is the bread which commeth downe from heauen, that a man may eate thereof, and not die.

51 I am the liuing bread, which came downe from heauen. If any man eate of this bread, he shall liue for euer: and the bread that I will giue, is my flesh, which I will giue for the life of the world.

52 The Iewes therefore stroue amongst themselues, saying, How can this man giue vs his flesh to eate?

53 Then Iesus sayd vnto them, Uerely, verely I say vnto you, Except yee eate the flesh of the sonne of man, and drinke his blood, yee haue no life in you.

54 Whoso eateth my flesh, and drinketh my blood, hath eternall life, and I will raise him vp at the last day.

55 For my flesh is meate indeed, and my blood is drinke indeed.

56 He that eateth my flesh, and drinketh my blood, dwelleth in me, and I in him.

57 As the liuing Father hath sent me, and I liue by the Father: so, he that eateth me, euen he shall liue by me.

58 This is that bread which came downe from heauen: not as your fathers did eate Manna, and are dead: he that eateth of this bread, shall liue for euer.

59 These things said hee in the Synagogue, as he taught in Capernaum.

60 Many therefore of his disciples, when they had heard this, said, This is an hard saying, who can heare it?

61 When Iesus knew in himselfe, that his disciples murmured at it, hee said vnto them, Doeth this offend you?

62 What and if yee shall see the sonne of man ascend vp where hee was before?62

63 It is the Spirit that quickeneth, the flesh profiteth nothing: the wordes that I speake vnto you, they are Spirit, and they are life.

64 But there are some of you that beleeue not. For Iesus knew from the beginning, who they were that beleeued not, and who should betray him.

65 And he said, Therefore said I vnto you, that no man can come vnto me, except it were giuen vnto him of my Father.

66 ¶ From that time many of his disciples went backe, and walked no more with him.

67 Then said Iesus vnto the twelue, Will ye also goe away?

68 Then Simon Peter answered him, Lord, to whom shall we goe? Thou hast the words of eternall life.

69 And we beleeue and are sure that thou art that Christ, the Sonne of the liuing God.69

70 Iesus answered them, Haue not I chosen you twelue, and one of you is a deuill?

71 He spake of Iudas Iscariot the sonne of Simon: for hee it was that should betray him, being one of the twelue.