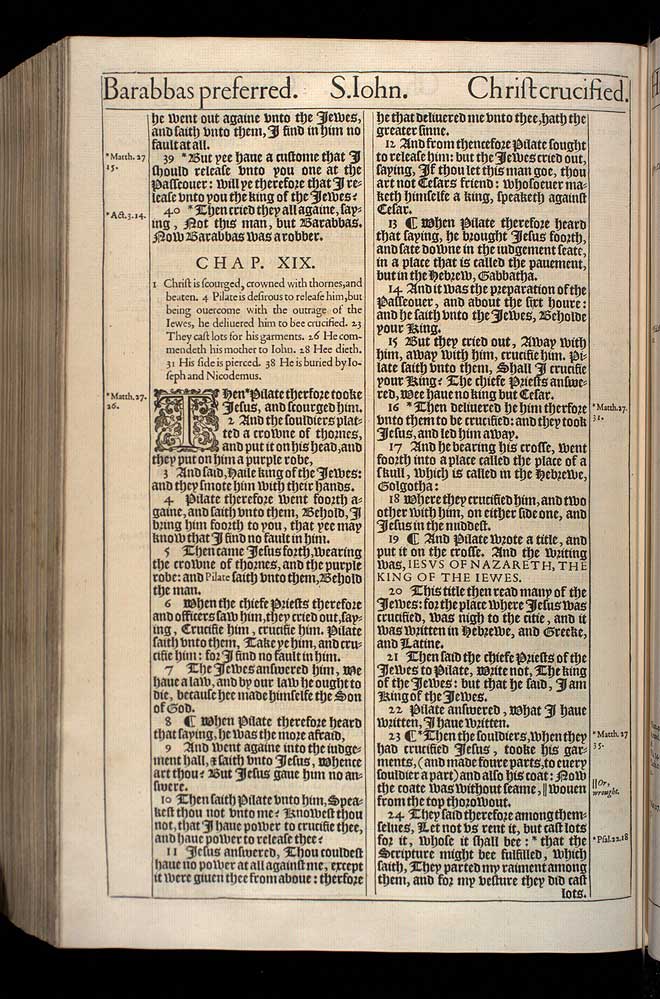 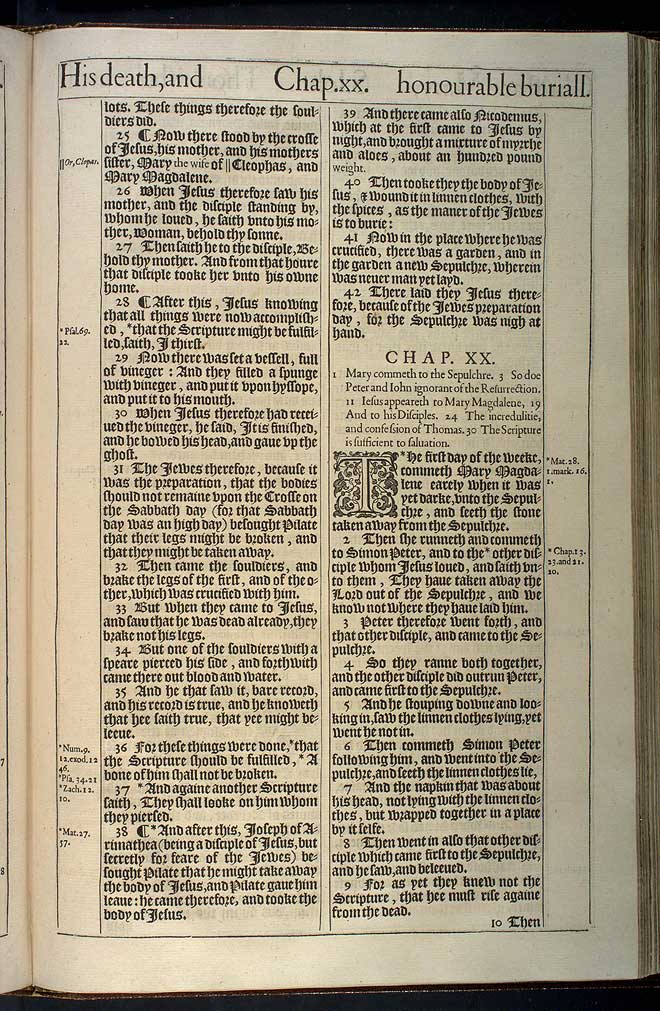 View this Iohn chapter 19 scan at a larger size

1 Christ is scourged, crowned with thornes, and beaten. 4 Pilate is desirous to release him, but being ouercome with the outrage of the Iewes, he deliuered him to bee crucified. 23 They cast lots for his garments. 26 He commendeth his mother to Iohn. 28 Hee dieth. 31 His side is pierced. 38 He is buried by Ioseph and Nicodemus.

1 Then Pilate therfore tooke Iesus, and scourged him.1

2 And the souldiers platted a crowne of thornes, and put it on his head, and they put on him a purple robe,

3 And said, Haile king of the Iewes: and they smote him with their hands.

4 Pilate therefore went foorth againe, and saith vnto them, Behold, I bring him foorth to you, that yee may know that I find no fault in him.

5 Then came Iesus forth, wearing the crowne of thornes, and the purple robe: and Pilate saith vnto them, Behold the man.

6 When the chiefe Priests therefore and officers saw him, they cried out, saying, Crucifie him, crucifie him. Pilate saith vnto them, Take ye him, and crucifie him: for I find no fault in him.

7 The Iewes answered him, We haue a law, and by our law he ought to die, because hee made himselfe the Son of God.

8 ¶ When Pilate therefore heard that saying, he was the more afraid,

9 And went againe into the iudgement hall, & saith vnto Iesus, Whence art thou? But Iesus gaue him no answere.

11 Iesus answered, Thou couldest haue no power at all against me, except it were giuen thee from aboue: therfore he that deliuered me vnto thee, hath the greater sinne.

12 And from thencefore Pilate sought to release him: but the Iewes cried out, saying, If thou let this man goe, thou art not Cesars friend: whosoeuer maketh himselfe a king, speaketh against Cesar.

13 ¶ When Pilate therefore heard that saying, he brought Iesus foorth, and sate downe in the iudgement seate, in a place that is called the pauement, but in the Hebrew, Gabbatha.

14 And it was the preparation of the Passeouer, and about the sixt houre: and he saith vnto the Iewes, Beholde your King.

15 But they cried out, Away with him, away with him, crucifie him. Pilate saith vnto them, Shall I crucifie your King? The chiefe Priests answered, Wee haue no king but Cesar.

16 Then deliuered he him therfore vnto them to be crucified: and they took Iesus, and led him away.16

17 And he bearing his crosse, went foorth into a place called the place of a skull, which is called in the Hebrewe, Golgotha:

18 Where they crucified him, and two other with him, on either side one, and Iesus in the middest.

19 ¶ And Pilate wrote a title, and put it on the crosse. And the writing was, IESVS OF NAZARETH, THE KING OF THE IEWES.

20 This title then read many of the Iewes: for the place where Iesus was crucified, was nigh to the citie, and it was written in Hebrewe, and Greeke, and Latine.

23 ¶ Then the souldiers, when they had crucified Iesus, tooke his garments, (and made foure parts, to euery souldier a part) and also his coat: Now the coate was without seame, wouen from the top thorowout.23

24 They said therefore among themselues, Let not vs rent it, but cast lots for it, whose it shall bee: that the Scripture might bee fulfilled, which saith, They parted my raiment among them, and for my vesture they did cast lots. These things therefore the souldiers did.24

25 ¶ Now there stood by the crosse of Iesus, his mother, and his mothers sister, Mary the wife of Cleophas, and Mary Magdalene.25

26 When Iesus therefore saw his mother, and the disciple standing by, whom he loued, he saith vnto his mother, Woman, behold thy sonne.

27 Then saith he to the disciple, Behold thy mother. And from that houre that disciple tooke her vnto his owne home.

28 ¶ After this, Iesus knowing that all things were now accomplished, that the Scripture might be fulfilled, saith, I thirst.28

29 Now there was set a vessell, full of vineger: And they filled a spunge with vineger, and put it vpon hyssope, and put it to his mouth.

30 When Iesus therefore had receiued the vineger, he said, It is finished, and he bowed his head, and gaue vp the ghost.

31 The Iewes therefore, because it was the preparation, that the bodies should not remaine vpon the Crosse on the Sabbath day (for that Sabbath day was an high day) besought Pilate that their legs might be broken, and that they might be taken away.

32 Then came the souldiers, and brake the legs of the first, and of the other, which was crucified with him.

33 But when they came to Iesus, and saw that he was dead already, they brake not his legs.

34 But one of the souldiers with a speare pierced his side, and forthwith came there out blood and water.

35 And he that saw it, bare record, and his record is true, and he knoweth that hee saith true, that yee might beleeue.

36 For these things were done, that the Scripture should be fulfilled, A bone of him shall not be broken.36

37 And againe another Scripture saith, They shall looke on him whom they piersed.37

38 ¶ And after this, Ioseph of Arimathea (being a disciple of Iesus, but secretly for feare of the Iewes) besought Pilate that he might take away the body of Iesus, and Pilate gaue him leaue: he came therefore, and tooke the body of Iesus.38

39 And there came also Nicodemus, which at the first came to Iesus by night, and brought a mixture of myrrhe and aloes, about an hundred pound weight.

40 Then tooke they the body of Iesus, & wound it in linnen clothes, with the spices, as the maner of the Iewes is to burie:

41 Now in the place where he was crucified, there was a garden, and in the garden a new Sepulchre, wherein was neuer man yet layd.

42 There laid they Iesus therefore, because of the Iewes preparation day, for the Sepulchre was nigh at hand.