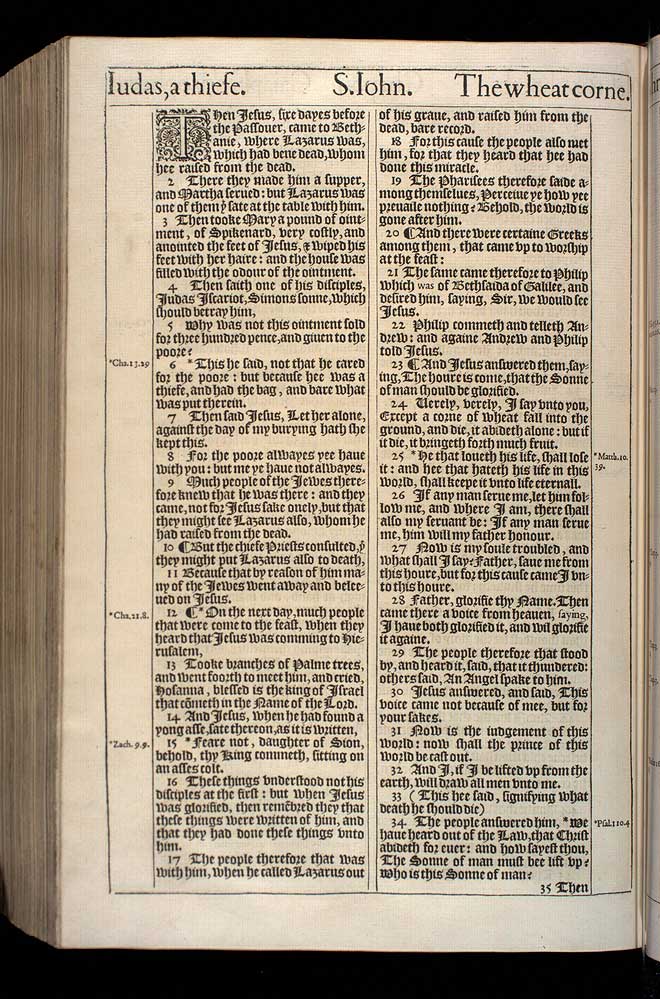 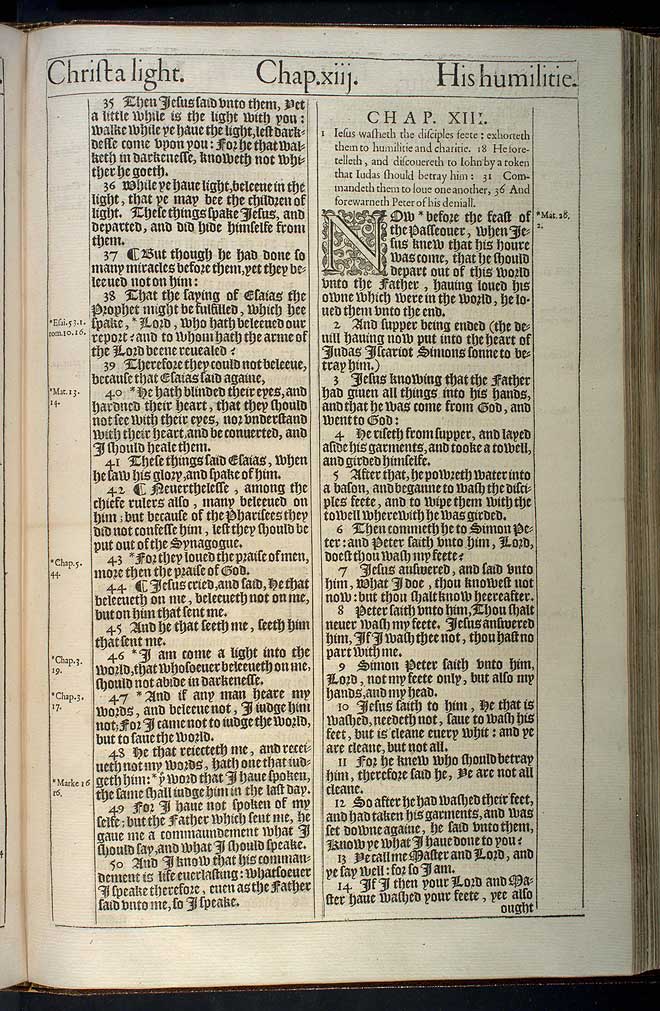 View this Iohn chapter 12 scan at a larger size

1 Iesus excuseth Mary anointing his feet. 9 The people flocke to see Lazarus. 10 The high Priests consult to kill him. 12 Christ rideth into Ierusalem. 20 Greekes desire to see Iesus. 23 He foretelleth his death. 37 The Iewes are generally blinded: 42 yet many chiefe rulers beleeue, but do not confesse him: 44 therfore Iesus calleth earnestly for confession of faith.

1 Then Iesus, sixe dayes before the Passouer, came to Bethanie, where Lazarus was, which had bene dead, whom hee raised from the dead.

2 There they made him a supper, and Martha serued: but Lazarus was one of them þt sate at the table with him.

3 Then tooke Mary a pound of ointment, of Spikenard, very costly, and anointed the feet of Iesus, & wiped his feet with her haire: and the house was filled with the odour of the ointment.

4 Then saith one of his disciples, Iudas Iscariot, Simons sonne, which should betray him,

5 Why was not this ointment sold for three hundred pence, and giuen to the poore?

6 This he said, not that he cared for the poore: but because hee was a thiefe, and had the bag, and bare what was put therein.6

7 Then said Iesus, Let her alone, against the day of my burying hath she kept this.

8 For the poore alwayes yee haue with you: but me ye haue not alwayes.

9 Much people of the Iewes therefore knew that he was there: and they came, not for Iesus sake onely, but that they might see Lazarus also, whom he had raised from the dead.

10 ¶ But the chiefe Priests consulted, þt they might put Lazarus also to death,

11 Because that by reason of him many of the Iewes went away and beleeued on Iesus.

12 ¶ On the next day, much people that were come to the feast, when they heard that Iesus was comming to Hierusalem,12

13 Tooke branches of Palme trees, and went foorth to meet him, and cried, Hosanna, blessed is the king of Israel that cōmeth in the Name of the Lord.

14 And Iesus, when he had found a yong asse, sate thereon, as it is written,

15 Feare not, daughter of Sion, behold, thy King commeth, sitting on an asses colt.15

16 These things vnderstood not his disciples at the first: but when Iesus was glorified, then remēbred they that these things were written of him, and that they had done these things vnto him.

17 The people therefore that was with him, when he called Lazarus out of his graue, and raised him from the dead, bare record.

18 For this cause the people also met him, for that they heard that hee had done this miracle.

19 The Pharisees therefore saide among themselues, Perceiue ye how yee preuaile nothing? Behold, the world is gone after him.

20 ¶ And there were certaine Greeks among them, that came vp to worship at the feast:

21 The same came therefore to Philip which was of Bethsaida of Galilee, and desired him, saying, Sir, we would see Iesus.

23 ¶ And Iesus answered them, saying, The houre is come, that the Sonne of man should be glorified.

24 Uerely, verely, I say vnto you, Except a corne of wheat fall into the ground, and die, it abideth alone: but if it die, it bringeth forth much fruit.

25 He that loueth his life, shall lose it: and hee that hateth his life in this world, shall keepe it vnto life eternall.25

27 Now is my soule troubled, and what shall I say? Father, saue me from this houre, but for this cause came I vnto this houre.

28 Father, glorifie thy Name. Then came there a voice from heauen, saying, I haue both glorified it, and wil glorifie it againe.

29 The people therefore that stood by, and heard it, said, that it thundered: others said, An Angel spake to him.

30 Iesus answered, and said, This voice came not because of mee, but for your sakes.

32 And I, if I be lifted vp from the earth, will draw all men vnto me.

33 (This hee said, signifying what death he should die)

34 The people answered him, We haue heard out of the Law, that Christ abideth for euer: and how sayest thou, The Sonne of man must bee lift vp? Who is this Sonne of man?34

35 Then Iesus said vnto them, Yet a little while is the light with you: walke while ye haue the light, lest darkdesse come vpon you: For he that walketh in darkenesse, knoweth not whither he goeth.

36 While ye haue light, beleeue in the light, that ye may bee the children of light. These things spake Iesus, and departed, and did hide himselfe from them.

37 ¶ But though he had done so many miracles before them, yet they beleeued not on him:

38 That the saying of Esaias the Prophet might be fulfilled, which hee spake, Lord, who hath beleeued our report? and to whom hath the arme of the Lord beene reuealed?38

39 Therefore they could not beleeue, because that Esaias said againe,

41 These things said Esaias, when he saw his glory, and spake of him.

42 ¶ Neuerthelesse, among the chiefe rulers also, many beleeued on him; but because of the Pharisees they did not confesse him, lest they should be put out of the Synagogue.

44 ¶ Iesus cried, and said, He that beleeueth on me, beleeueth not on me, but on him that sent me.

45 And he that seeth me, seeth him that sent me.

46 I am come a light into the world, that whosoeuer beleeueth on me, should not abide in darkenesse.46

47 And if any man heare my words, and beleeue not, I iudge him not; For I came not to iudge the world, but to saue the world.47

48 He that reiecteth me, and receiueth not my words, hath one that iudgeth him: þe word that I haue spoken, the same shall iudge him in the last day.48

50 And I know that his commandement is life euerlasting: whatsoeuer I speake therefore, euen as the Father said vnto me, so I speake.