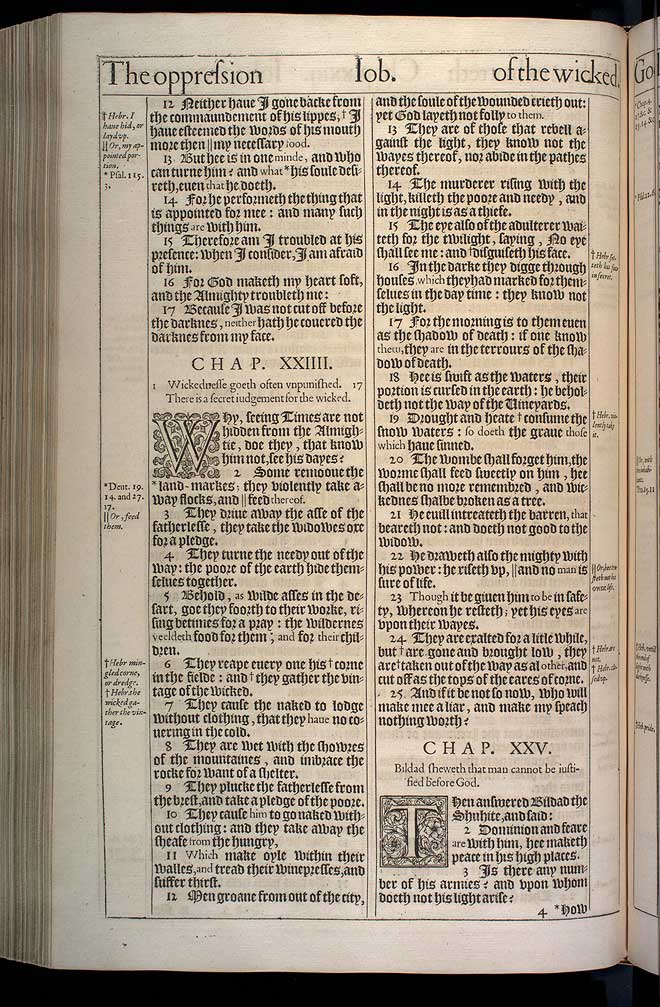 View this Iob chapter 24 scan at a larger size

1 Wickednesse goeth often vnpunished. 17 There is a secret iudgement for the wicked.

1 Why, seeing Times are not hidden from the Almightie, doe they, that know him not, see his dayes?

2 Some remooue the land-markes; they violently take away flocks, and feed thereof.2

3 They driue away the asse of the fatherlesse, they take the widowes oxe for a pledge.

4 They turne the needy out of the way: the poore of the earth hide themselues together.

5 Behold, as wilde asses in the desart, goe they foorth to their worke, rising betimes for a pray: the wildernes yeeldeth food for them, and for their children.

6 They reape euery one his corne in the fielde: and they gather the vintage of the wicked.6

7 They cause the naked to lodge without clothing, that they haue no couering in the cold.

8 They are wet with the showres of the mountaines, and imbrace the rocke for want of a shelter.

9 They plucke the fatherlesse from the brest, and take a pledge of the poore.

10 They cause him to go naked without clothing: and they take away the sheafe from the hungry,

11 Which make oyle within their walles, and tread their winepresses, and suffer thirst.

12 Men groane from out of the city, and the soule of the wounded crieth out: yet God layeth not folly to them.

13 They are of those that rebell against the light, they know not the wayes thereof, nor abide in the pathes thereof.

14 The murderer rising with the light, killeth the poore and needy, and in the night is as a thiefe.

15 The eye also of the adulterer waiteth for the twilight, saying, No eye shall see me: and disguiseth his face.15

16 In the darke they digge through houses which they had marked for themselues in the day time: they know not the light.

18 Hee is swift as the waters, their portion is cursed in the earth: he beholdeth not the way of the Uineyards.

19 Drought and heate consume the snow waters: so doeth the graue those which haue sinned.19

20 The wombe shall forget him, the worme shall feed sweetly on him, hee shall be no more remembred, and wickednes shalbe broken as a tree.

21 He euill intreateth the barren, that beareth not: and doeth not good to the widow.

22 He draweth also the mighty with his power: he riseth vp, and no man is sure of life.22

23 Though it be giuen him to be in safety, whereon he resteth; yet his eyes are vpon their wayes.

24 They are exalted for a litle while, but are gone and brought low, they are taken out of the way as al other, and cut off as the tops of the eares of corne.24

25 And if it be not so now, who will make mee a liar, and make my speach nothing worth?