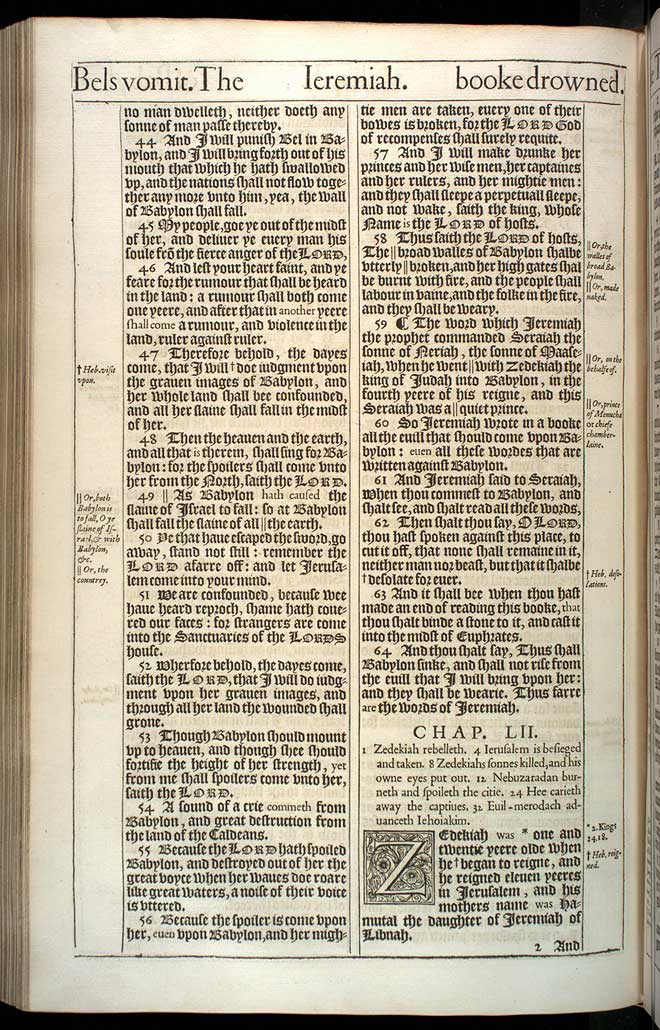 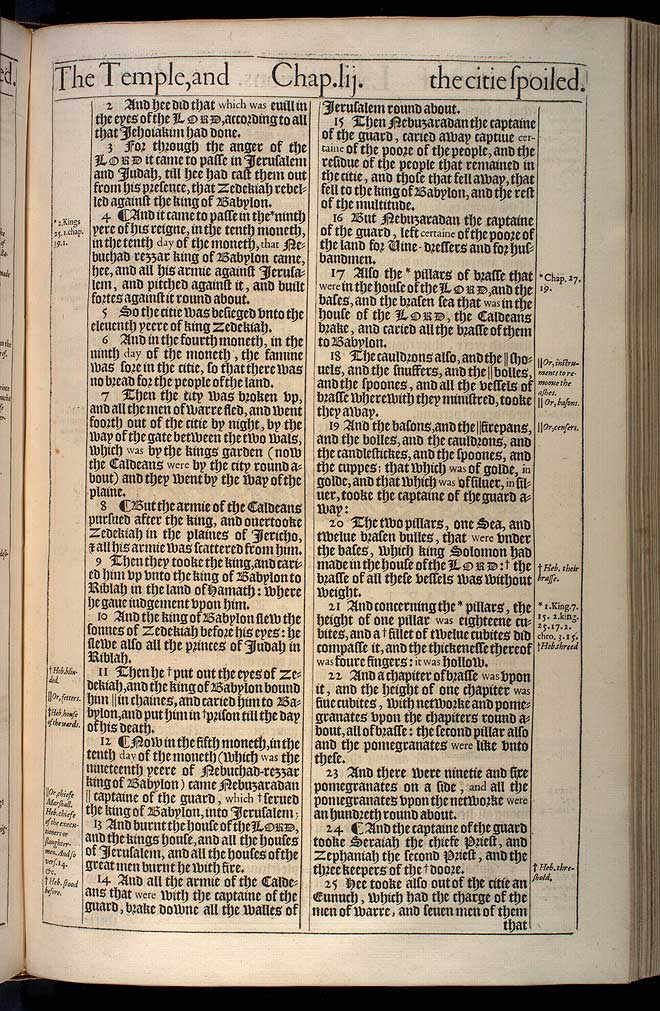 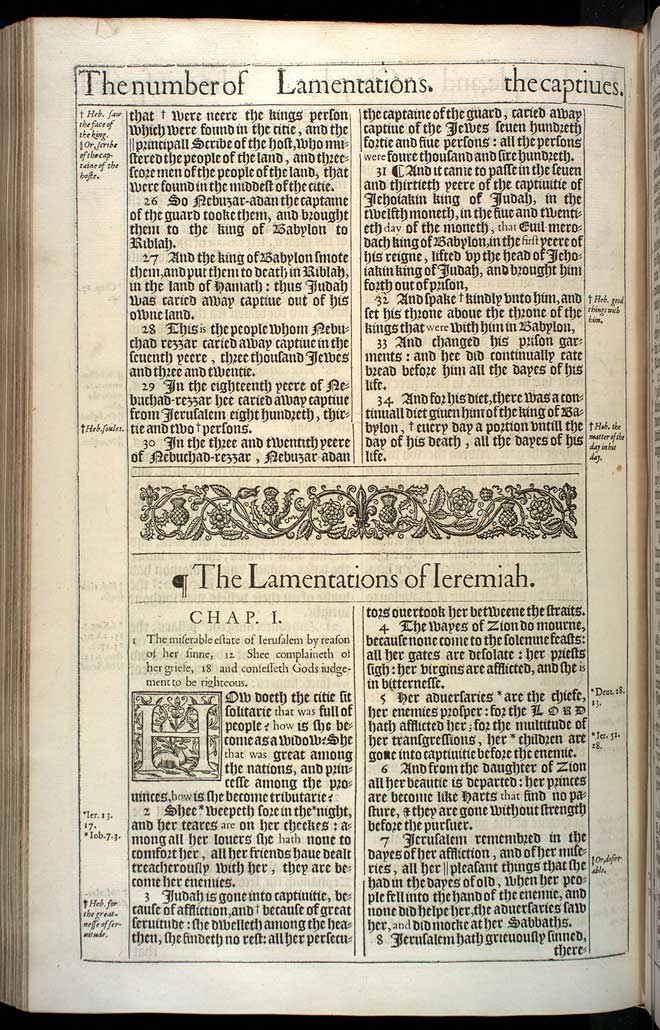 View this Ieremiah chapter 52 scan at a larger size

1 Zedekiah was one and twentie yeere olde when he began to reigne, and he reigned eleuen yeeres in Ierusalem, and his mothers name was Hamutal the daughter of Ieremiah of Libnah.1

2 And hee did that which was euill in the eyes of the Lord, according to all that Iehoiakim had done.

3 For through the anger of the Lord it came to passe in Ierusalem and Iudah, till hee had cast them out from his presence, that Zedekiah rebelled against the king of Babylon.

4 ¶ And it came to passe in the ninth yere of his reigne, in the tenth moneth, in the tenth day of the moneth, that Nebuchad rezzar king of Babylon came, hee, and all his armie against Ierusalem, and pitched against it, and built fortes against it round about.4

5 So the citie was besieged vnto the eleuenth yeere of king Zedekiah.

6 And in the fourth moneth, in the ninth day of the moneth, the famine was sore in the citie, so that there was no bread for the people of the land.

7 Then the city was broken vp, and all the men of warre fled, and went foorth out of the citie by night, by the way of the gate between the two wals, which was by the kings garden (now the Caldeans were by the city round about) and they went by the way of the plaine.

8 ¶ But the armie of the Caldeans pursued after the king, and ouertooke Zedekiah in the plaines of Iericho, & all his armie was scattered from him.

9 Then they tooke the king, and caried him vp vnto the king of Babylon to Riblah in the land of Hamath: where he gaue iudgement vpon him.

10 And the king of Babylon slew the sonnes of Zedekiah before his eyes: he slewe also all the princes of Iudah in Riblah.

11 Then he put out the eyes of Zedekiah, and the king of Babylon bound him in chaines, and caried him to Babylon, and put him in prison till the day of his death.11

12 ¶ Now in the fifth moneth, in the tenth day of the moneth (which was the nineteenth yeere of Nebuchad-rezzar king of Babylon) came Nebuzaradan captaine of the guard, which serued the king of Babylon, into Ierusalem;12

14 And all the armie of the Caldeans that were with the captaine of the guard, brake downe all the walles of Ierusalem round about.

16 But Nebuzaradan the captaine of the guard, left certaine of the poore of the land for Uine-dressers and for husbandmen.

18 The cauldrons also, and the shouels, and the snuffers, and the bolles, and the spoones, and all the vessels of brasse wherewith they ministred, tooke they away.18

20 The two pillars, one Sea, and twelue brasen bulles, that were vnder the bases, which king Solomon had made in the house of the Lord: the brasse of all these vessels was without weight.20

21 And concerning the pillars, the height of one pillar was eighteene cubites, and a fillet of twelue cubites did compasse it, and the thickenesse thereof was foure fingers: it was hollow.21

22 And a chapiter of brasse was vpon it, and the height of one chapiter was fiue cubites, with networke and pomegranates vpon the chapiters round about, all of brasse: the second pillar also and the pomegranates were like vnto these.

23 And there were ninetie and sixe pomegranates on a side, and all the pomegranates vpon the networke were an hundreth round about.

24 ¶ And the captaine of the guard tooke Seraiah the chiefe Priest, and Zephaniah the second Priest, and the three keepers of the doore.24

26 So Nebuzar-adan the captaine of the guard tooke them, and brought them to the king of Babylon to Riblah.

27 And the king of Babylon smote them, and put them to death in Riblah, in the land of Hamath: thus Iudah was caried away captiue out of his owne land.

28 This is the people whom Nebuchad-rezzar caried away captiue in the seuenth yeere, three thousand Iewes and three and twentie.

29 In the eighteenth yeere of Nebuchad-rezzar hee caried away captiue from Ierusalem eight hundredth, thirtie and two persons.29

30 In the three and twentith yeere of Nebuchad-rezzar, Nebuzar-adan the captaine of the guard, caried away captiue of the Iewes seuen hundreth fortie and fiue persons: all the persons were foure thousand and sixe hundreth.

32 And spake kindly vnto him, and set his throne aboue the throne of the kings that were with him in Babylon,32

33 And changed his prison garments: and hee did continually eate bread before him all the dayes of his life.

34 And for his diet, there was a continuall diet giuen him of the king of Babylon, euery day a portion vntill the day of his death, all the dayes of his life.34