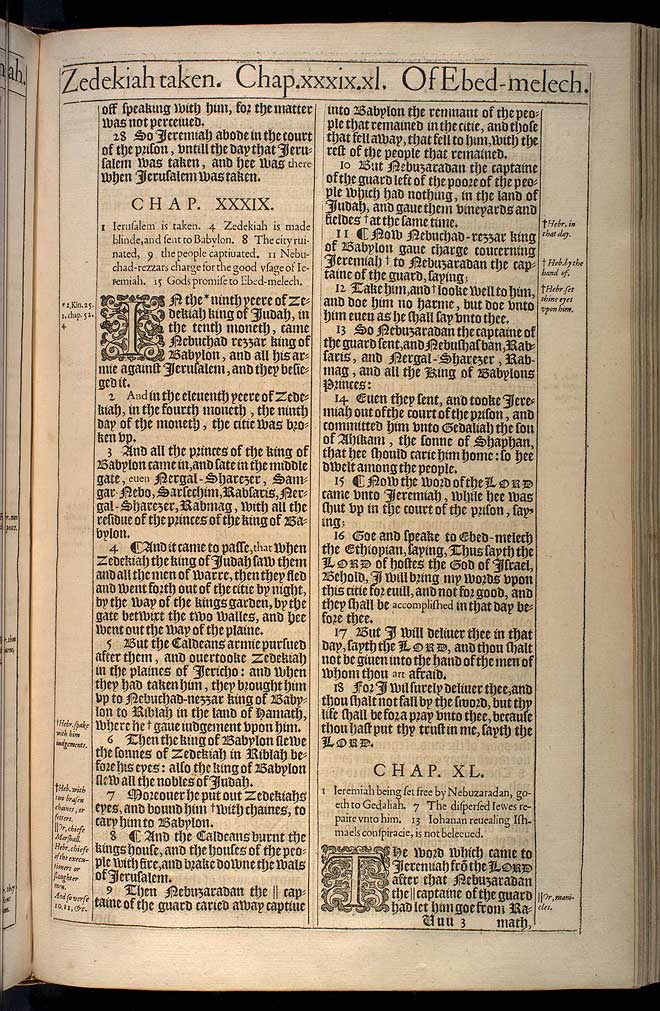 View this Ieremiah chapter 39 scan at a larger size

1 In the ninth yeere of Zedekiah king of Iudah, in the tenth moneth, came Nebuchad rezzar king of Babylon, and all his armie against Ierusalem, and they besieged it.1

2 And in the eleuenth yeere of Zedekiah, in the fourth moneth, the ninth day of the moneth, the citie was broken vp.

4 ¶ And it came to passe, that when Zedekiah the king of Iudah saw them and all the men of warre, then they fled and went forth out of the citie by night, by the way of the kings garden, by the gate betwixt the two walles, and hee went out the way of the plaine.

5 But the Caldeans armie pursued after them, and ouertooke Zedekiah in the plaines of Iericho: and when they had taken him, they brought him vp to Nebuchad-nezzar king of Babylon to Riblah in the land of Hamath, where he gaue iudgement vpon him.5

7 Moreouer he put out Zedekiahs eyes, and bound him with chaines, to cary him to Babylon.7

8 ¶ And the Caldeans burnt the kings house, and the houses of the people with fire, and brake downe the wals of Ierusalem.

10 But Nebuzaradan the captaine of the guard left of the poore of the people which had nothing, in the land of Iudah, and gaue them vineyards and fieldes at the same time.10

12 Take him, and looke well to him, and doe him no harme, but doe vnto him euen as he shall say vnto thee.12

13 So Nebuzaradan the captaine of the guard sent, and Nebushasban, Rabsaris, and Nergal-Sharezer, Rabmag, and all the King of Babylons Princes:

14 Euen they sent, and tooke Ieremiah out of the court of the prison, and committed him vnto Gedaliah the son of Ahikam, the sonne of Shaphan, that hee should carie him home: so hee dwelt among the people.

15 ¶ Now the word of the Lord came vnto Ieremiah, while hee was shut vp in the court of the prison, saying;

16 Goe and speake to Ebed-melech the Ethiopian, saying, Thus sayth the Lord of hostes the God of Israel, Behold, I will bring my words vpon this citie for euill, and not for good, and they shall be accomplished in that day before thee.

17 But I will deliuer thee in that day, sayth the Lord, and thou shalt not be giuen into the hand of the men of whom thou art afraid.

18 For I wil surely deliuer thee, and thou shalt not fall by the sword, but thy life shall be for a pray vnto thee, because thou hast put thy trust in me, sayth the Lord.