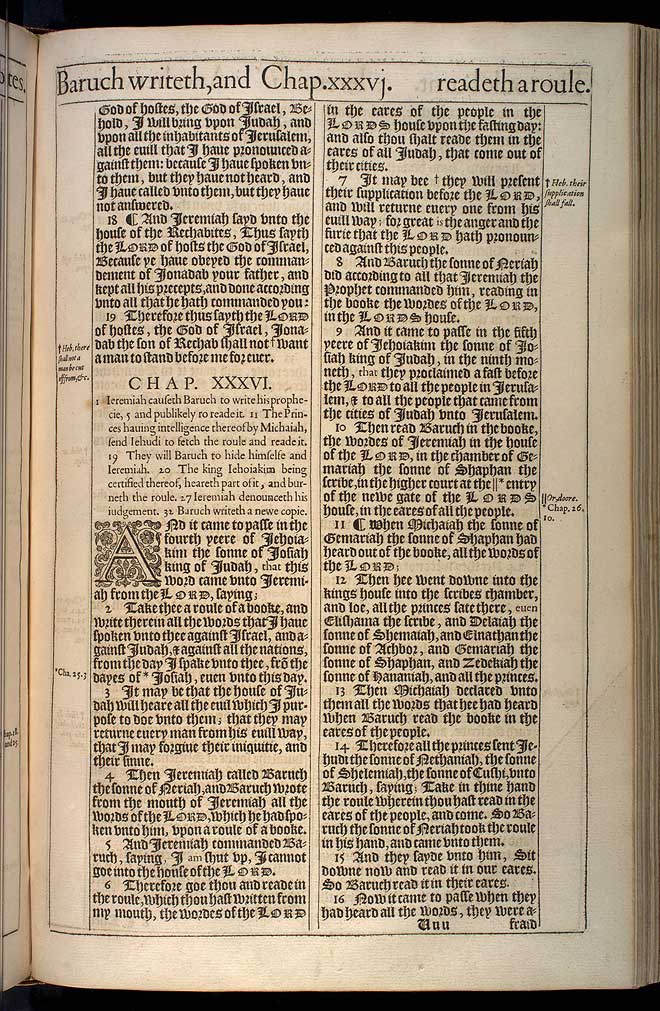 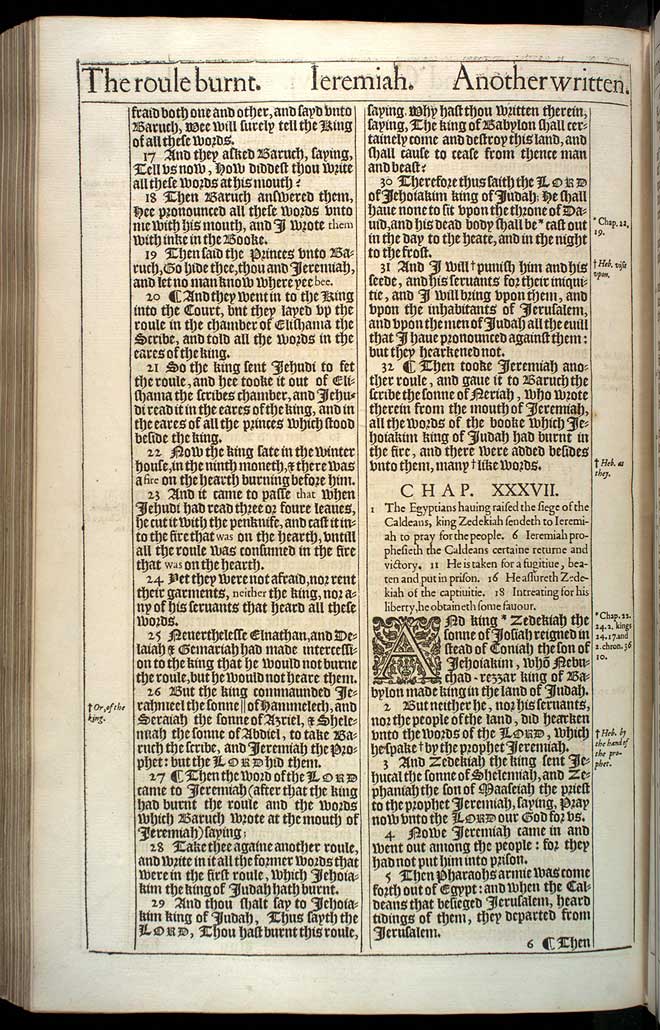 View this Ieremiah chapter 36 scan at a larger size

1 Ieremiah causeth Baruch to write his prophecie, 5 and publikely ro reade it. 11 The Princes hauing intelligence thereof by Michaiah, send Iehudi to fetch the roule and reade it. 19 They will Baruch to hide himselfe and Ieremiah. 20 The king Iehoiakim being certified thereof, heareth part of it, and burneth the roule. 27 Ieremiah denounceth his iudgement. 32 Baruch writeth a newe copie.

1 And it came to passe in the fourth yeere of Iehoiakim the sonne of Iosiah king of Iudah, that this word came vnto Ieremiah from the Lord, saying;

2 Take thee a roule of a booke, and write therein all the words that I haue spoken vnto thee against Israel, and against Iudah, & against all the nations, from the day I spake vnto thee, frō the dayes of Iosiah, euen vnto this day.2

3 It may be that the house of Iudah will heare all the euil which I purpose to doe vnto them; that they may returne euery man from his euill way, that I may forgiue their iniquitie, and their sinne.

4 Then Ieremiah called Baruch the sonne of Neriah, and Baruch wrote from the mouth of Ieremiah all the words of the Lord, which he had spoken vnto him, vpon a roule of a booke.

5 And Ieremiah commanded Baruch, saying, I am shut vp, I cannot goe into the house of the Lord.

6 Therefore goe thou and reade in the roule, which thou hast written from my mouth, the wordes of the Lord in the eares of the people in the Lords house vpon the fasting day: and also thou shalt reade them in the eares of all Iudah, that come out of their cities.

7 It may bee they will present their supplication before the Lord, and will returne euery one from his euill way; for great is the anger and the furie that the Lord hath pronounced against this people.7

8 And Baruch the sonne of Neriah did according to all that Ieremiah the Prophet commanded him, reading in the booke the wordes of the Lord, in the Lords house.

9 And it came to passe in the fifth yeere of Iehoiakim the sonne of Iosiah king of Iudah, in the ninth moneth, that they proclaimed a fast before the Lord to all the people in Ierusalem, & to all the people that came from the cities of Iudah vnto Ierusalem.

10 Then read Baruch in the booke, the wordes of Ieremiah in the house of the Lord, in the chamber of Gemariah the sonne of Shaphan the scribe, in the higher court at the entry of the newe gate of the Lords house, in the eares of all the people.10

13 Then Michaiah declared vnto them all the words that hee had heard when Baruch read the booke in the eares of the people.

15 And they sayde vnto him, Sit downe now and read it in our eares. So Baruch read it in their eares.

16 Now it came to passe when they had heard all the words, they were afraid both one and other, and sayd vnto Baruch, Wee will surely tell the King of all these words.

17 And they asked Baruch, saying, Tell vs now, How diddest thou write all these words at his mouth?

18 Then Baruch answered them, Hee pronounced all these words vnto me with his mouth, and I wrote them with inke in the Booke.

19 Then said the Princes vnto Baruch, Go hide thee, thou and Ieremiah, and let no man know where yee bee.

20 ¶ And they went in to the King into the Court, bnt they layed vp the roule in the chamber of Elishama the Scribe, and told all the words in the eares of the king.

21 So the king sent Iehudi to fet the roule, and hee tooke it out of Elishama the scribes chamber, and Iehudi read it in the eares of the king, and in the eares of all the princes which stood beside the king.

22 Now the king sate in the winter house, in the ninth moneth, & there was a fire on the hearth burning before him.

24 Yet they were not afraid, nor rent their garments, neither the king, nor any of his seruants that heard all these words.

25 Neuerthelesse Elnathan, and Delaiah & Gemariah had made intercession to the king that he would not burne the roule, but he would not heare them.

27 ¶ Then the word of the Lord came to Ieremiah (after that the king had burnt the roule and the words which Baruch wrote at the mouth of Ieremiah) saying;

28 Take thee againe another roule, and write in it all the former words that were in the first roule, which Iehoiakim the king of Iudah hath burnt.

29 And thou shalt say to Iehoiakim king of Iudah, Thus sayth the Lord, Thou hast burnt this roule, saying, Why hast thou written therein, saying, The king of Babylon shall certainely come and destroy this land, and shall cause to cease from thence man and beast?

30 Therefore thus saith the Lord of Iehoiakim king of Iudah; He shall haue none to sit vpon the throne of Dauid, and his dead body shall be cast out in the day to the heate, and in the night to the frost.30

31 And I will punish him and his seede, and his seruants for their iniquitie, and I will bring vpon them, and vpon the inhabitants of Ierusalem, and vpon the men of Iudah all the euill that I haue pronounced against them: but they hearkened not.31

32 ¶ Then tooke Ieremiah another roule, and gaue it to Baruch the scribe the sonne of Neriah, who wrote therein from the mouth of Ieremiah, all the words of the booke which Iehoiakim king of Iudah had burnt in the fire, and there were added besides vnto them, many like words.32