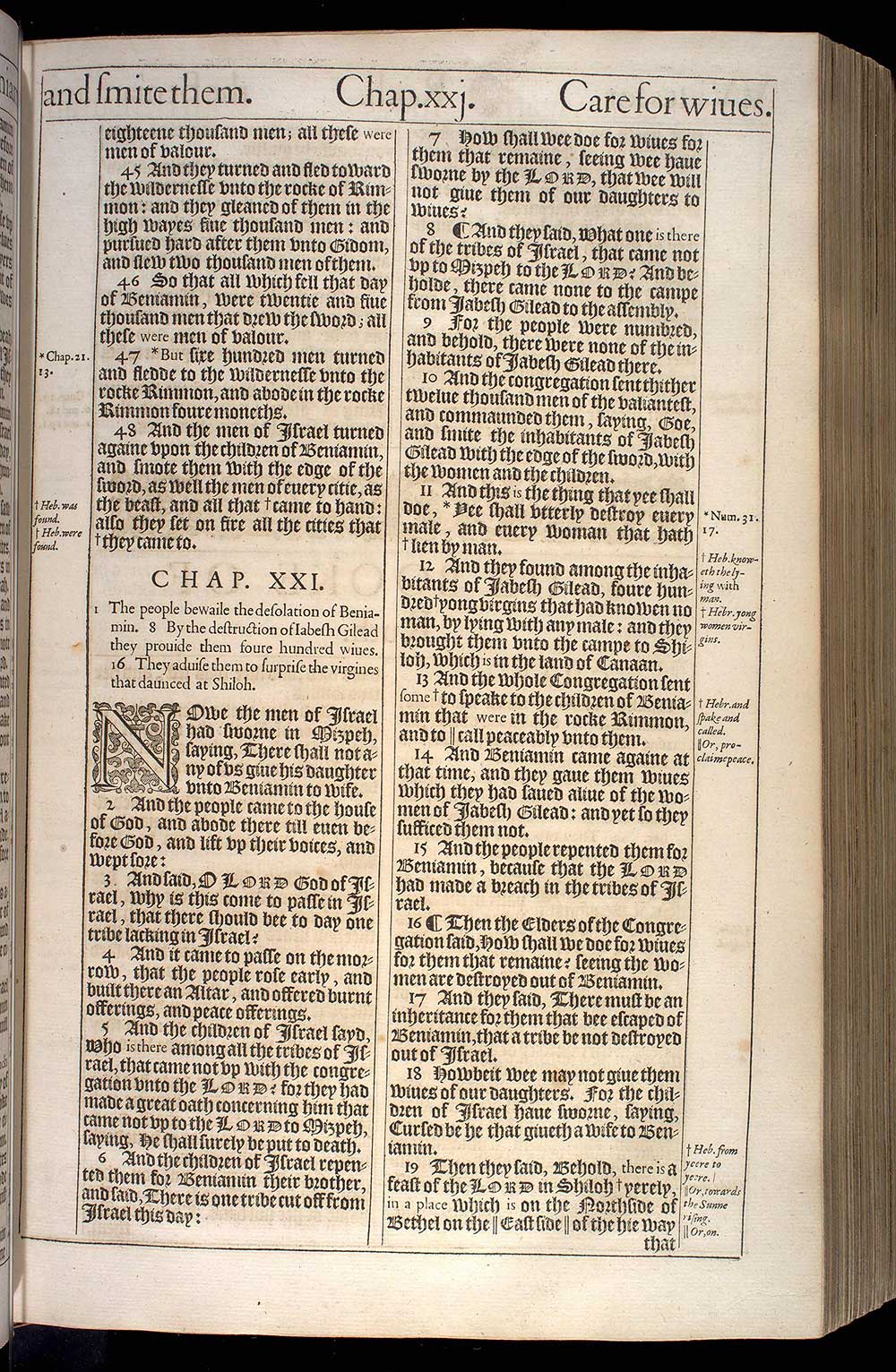 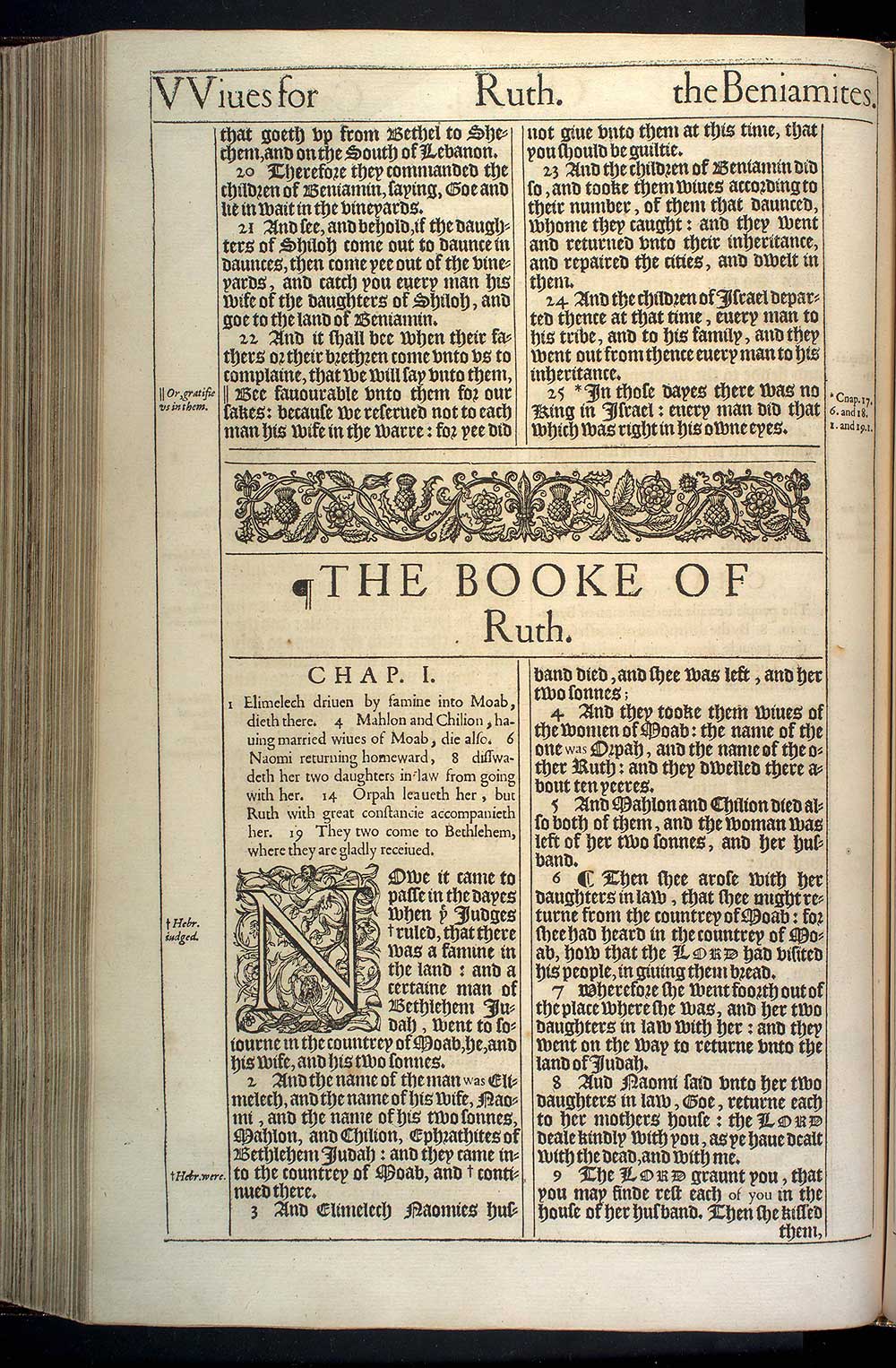 1 The people bewaile the desolation of Beniamin. 8 By the destruction of Iabesh Gilead they prouide them foure hundred wiues. 16 They aduise them to surprise the virgines that daunced at Shiloh.

1Nowe the men of Israel had sworne in Mizpeh, saying, There shall not any of vs giue his daughter vnto Beniamin to wife.

2And the people came to the house of God, and abode there till euen before God, and lift vp their voices, and wept sore:

3And said, O Lord God of Israel, why is this come to passe in Israel, that there should bee to day one tribe lacking in Israel?

4And it came to passe on the morrow, that the people rose early, and built there an Altar, and offered burnt offerings, and peace offerings.

6And the children of Israel repented them for Beniamin their brother, and said, There is one tribe cut off from Israel this day:

7How shall wee doe for wiues for them that remaine, seeing wee haue sworne by the Lord, that wee will not giue them of our daughters to wiues?

8¶ And they said, What one is there of the tribes of Israel, that came not vp to Mizpeh to the Lord ? And beholde, there came none to the campe from Iabesh Gilead to the assembly.

9For the people were numbred, and behold, there were none of the inhabitants of Iabesh Gilead there.

10And the congregation sent thither twelue thousand men of the valiantest, and commaunded them, saying, Goe, and smite the inhabitants of Iabesh Gilead with the edge of the sword, with the women and the children.

11And this is the thing that yee shall doe, Yee shall vtterly destroy euery male, and euery woman that hath lien by man.11

12And they found among the inhabitants of Iabesh Gilead, foure hundred yong virgins that had knowen no man, by lying with any male: and they brought them vnto the campe to Shiloh, which is in the land of Canaan.12

13And the whole Congregation sent some to speake to the children of Beniamin that were in the rocke Rimmon, and to call peaceably vnto them.13

14And Beniamin came againe at that time, and they gaue them wiues which they had saued aliue of the women of Iabesh Gilead: and yet so they sufficed them not.

15And the people repented them for Beniamin, because that the Lord had made a breach in the tribes of Israel.

16¶ Then the Elders of the Congregation said, How shall we doe for wiues for them that remaine? seeing the women are destroyed out of Beniamin.

17And they said, There must be an inheritance for them that bee escaped of Beniamin, that a tribe be not destroyed out of Israel.

18Howbeit wee may not giue them wiues of our daughters. For the children of Israel haue sworne, saying, Cursed be he that giueth a wife to Beniamin.

19Then they said, Behold, there is a feast of the Lord in Shiloh yerely, in a place which is on the Northside of Bethel on the East side of the hie way that goeth vp from Bethel to Shechem, and on the South of Lebanon.19

20Therefore they commanded the children of Beniamin, saying, Goe and lie in wait in the vineyards.

22And it shall bee when their fathers or their brethren come vnto vs to complaine, that we will say vnto them, Bee fauourable vnto them for our sakes: because we reserued not to each man his wife in the warre: for yee did not giue vnto them at this time, that you should be guiltie.22

23And the children of Beniamin did so, and tooke them wiues according to their number, of them that daunced, whome they caught: and they went and returned vnto their inheritance, and repaired the cities, and dwelt in them.

25In those dayes there was no King in Israel: euery man did that which was right in his owne eyes.25