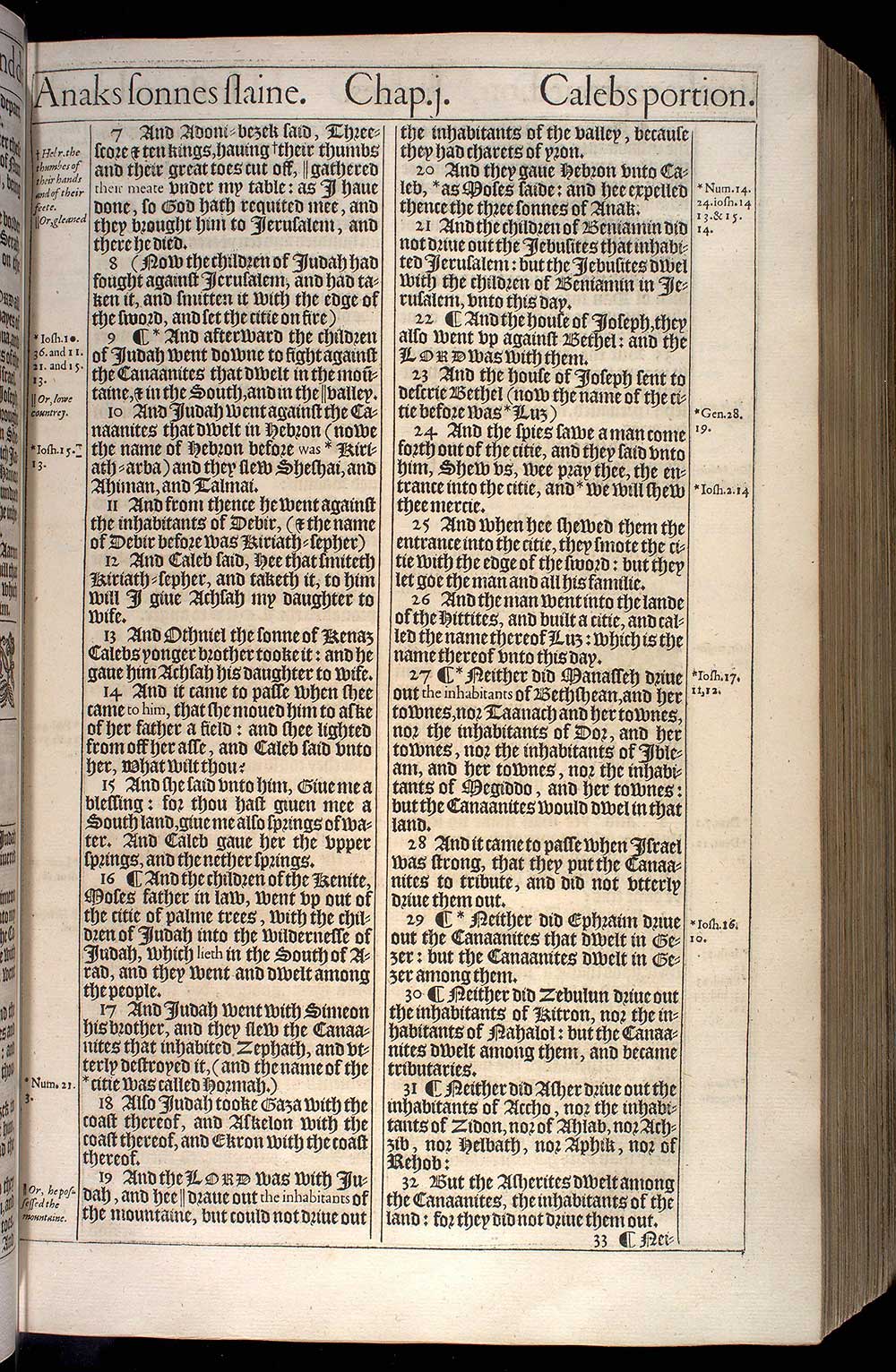 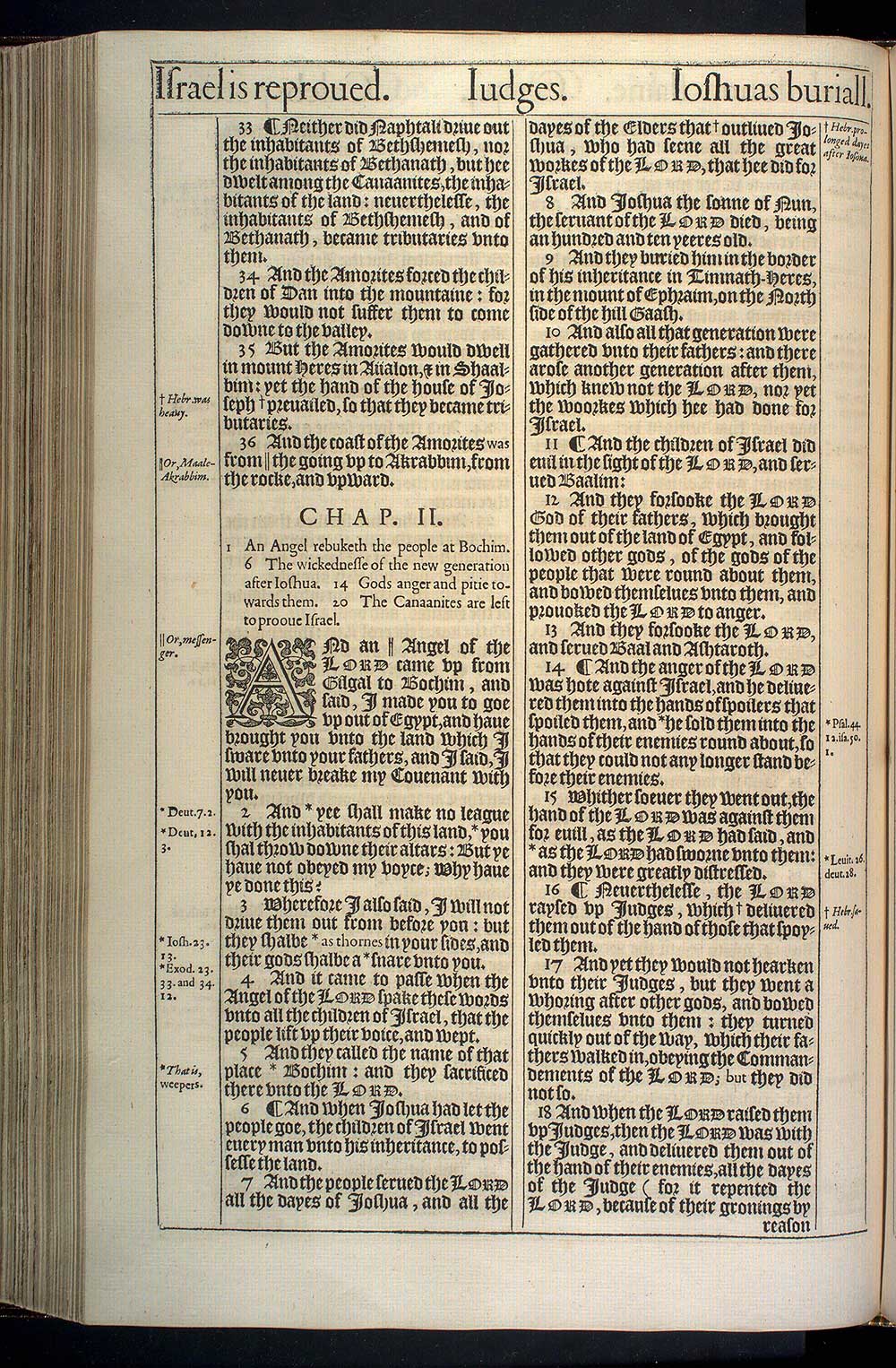 1 The actes of Iudah and Simeon. 4 Adonibezek iustly requited. 8 Hierusalem taken. 10 Hebron taken. 11 Othniel hath Achsah to wife for taking of Debir. 16 The Kenites dwel in Iudah. 17 Hormah, Gaza, Askelon and Ekron taken. 21 The acts of Beniamin. 22 Of the house of Ioseph, who take Bethel. 30 Of Zebulun. 31 Of Asher. 33 Of Naphtali. 34 Of Dan.

1Now after the death of Ioshua, it came to passe, that the children of Israel asked the Lord, saying, Who shal goe vp for vs against the Canaanites first, to fight against them?

2And the Lord sayd, Iudah shall goe vp: Behold, I haue deliuered the land into his hand.

3And Iudah saide vnto Simeon his brother, Come vp with me into my lot, that wee may fight against the Canaanites, and I likewise will goe with thee into thy lot. So Simeon went with him.

4And Iudah went vp, and the Lord deliuered the Canaanites and the Perizzites into their hand: and they slew of them in Bezek ten thousand men.

5And they found Adoni-bezek in Bezek: and they fought against him, and they slew the Canaanites, and the Perizzites.

6But Adoni-bezek fled, and they pursued after him, and caught him, and cut off his thumbes, and his great toes.

7And Adoni-bezek said, Threescore & ten kings, hauing their thumbs and their great toes cut off, gathered their meate vnder my table: as I haue done, so God hath requited mee, and they brought him to Ierusalem, and there he died.7

8(Now the children of Iudah had fought against Ierusalem, and had taken it, and smitten it with the edge of the sword, and set the citie on fire)

9¶ And afterward the children of Iudah went downe to fight against the Canaanites that dwelt in the moūtaine, & in the South, and in the valley.9

10And Iudah went against the Canaanites that dwelt in Hebron (nowe the name of Hebron before was Kiriath-arba) and they slew Sheshai, and Ahiman, and Talmai.10

11And from thence he went against the inhabitants of Debir, (& the name of Debir before was Kiriath-sepher)

12And Caleb said, Hee that smiteth Kiriath-sepher, and taketh it, to him will I giue Achsah my daughter to wife.

13And Othniel the sonne of Kenaz Calebs yonger brother tooke it: and he gaue him Achsah his daughter to wife.

14And it came to passe when shee came to him, that she moued him to aske of her father a field: and shee lighted from off her asse, and Caleb said vnto her, What wilt thou?

15And she said vnto him, Giue me a blessing: for thou hast giuen mee a South land, giue me also springs of water. And Caleb gaue her the vpper springs, and the nether springs.

16¶ And the children of the Kenite, Moses father in law, went vp out of the citie of palme trees, with the children of Iudah into the wildernesse of Iudah, which lieth in the South of Arad, and they went and dwelt among the people.

17And Iudah went with Simeon his brother, and they slew the Canaanites that inhabited Zephath, and vtterly destroyed it, (and the name of the citie was called Hormah.)17

20And they gaue Hebron vnto Caleb, as Moses saide: and hee expelled thence the three sonnes of Anak.20

22¶ And the house of Ioseph, they also went vp against Bethel: and the Lord was with them.

24And the spies sawe a man come forth out of the citie, and they said vnto him, Shew vs, wee pray thee, the entrance into the citie, and we will shew thee mercie.24

25And when hee shewed them the entrance into the citie, they smote the citie with the edge of the sword: but they let goe the man and all his familie.

28And it came to passe when Israel was strong, that they put the Canaanites to tribute, and did not vtterly driue them out.

32But the Asherites dwelt among the Canaanites, the inhabitants of the land: for they did not driue them out.

34And the Amorites forced the children of Dan into the mountaine: for they would not suffer them to come downe to the valley.

35But the Amorites would dwell in mount Heres in Aiialon, & in Shaalbim: yet the hand of the house of Ioseph preuailed, so that they became tributaries.35

36And the coast of the Amorites was from the going vp to Akrabbim, from the rocke, and vpward.36