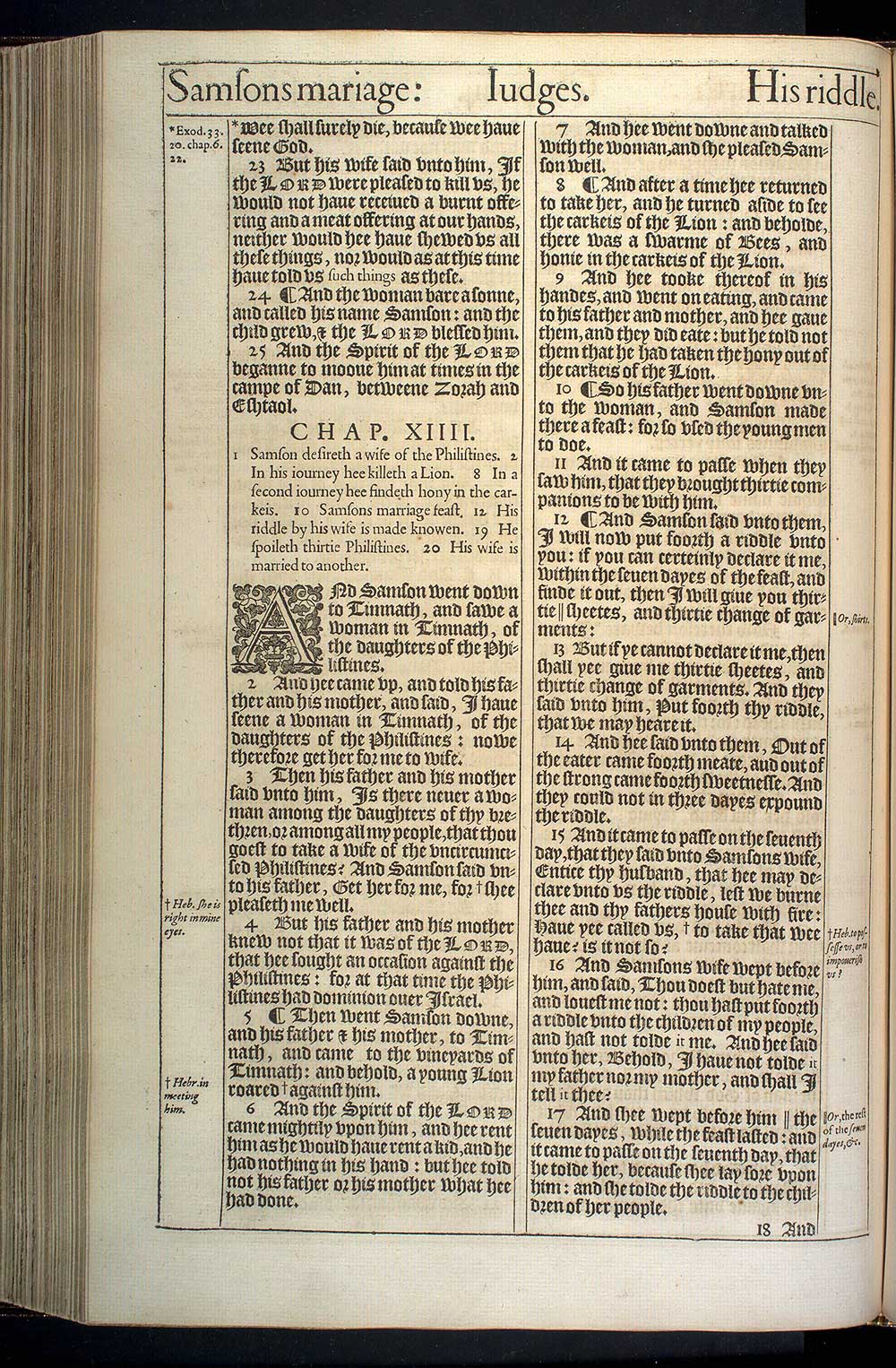 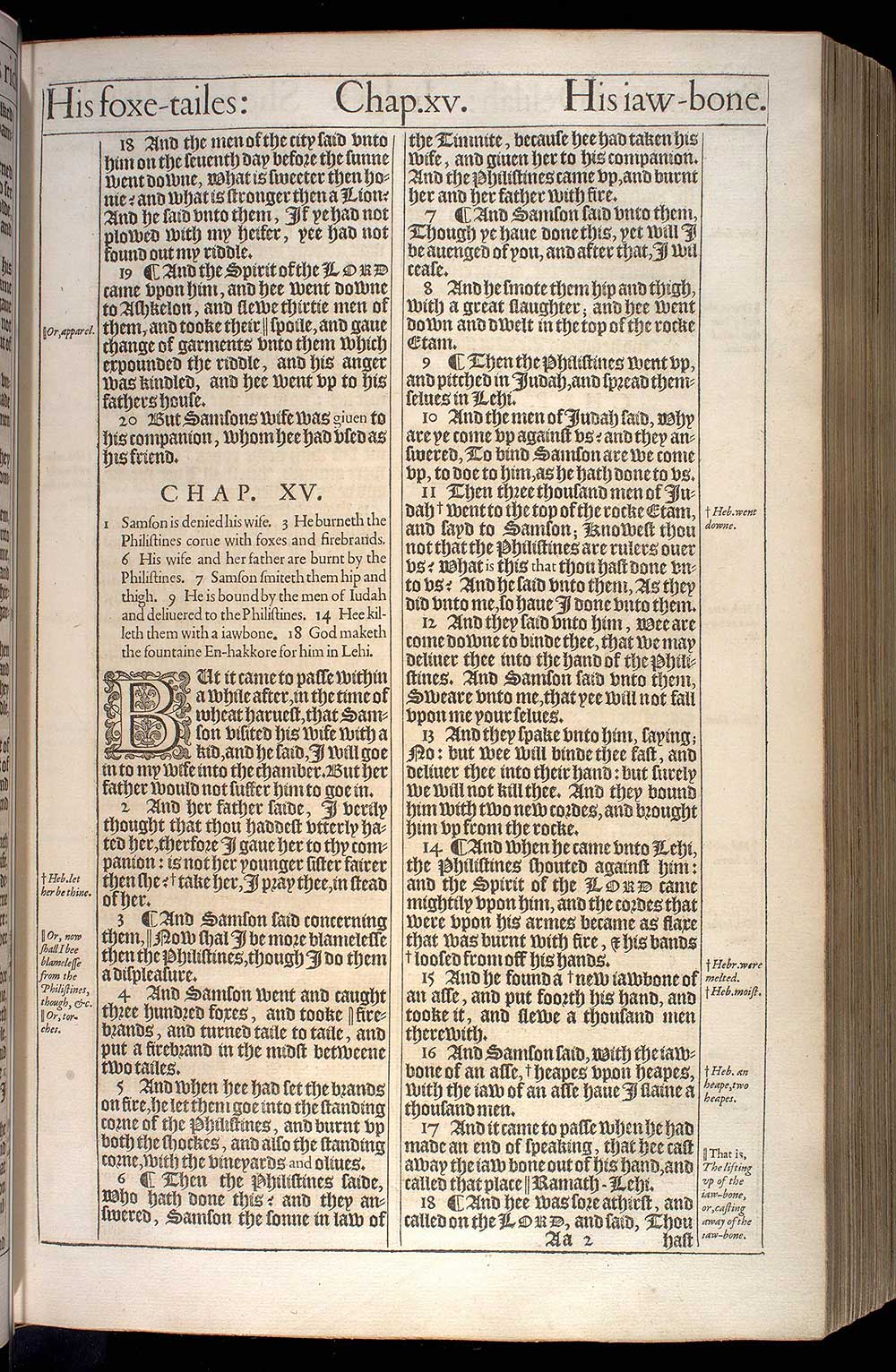 1And Samson went down to Timnath, and sawe a woman in Timnath, of the daughters of the Philistines.

2And hee came vp, and told his father and his mother, and said, I haue seene a woman in Timnath, of the daughters of the Philistines: nowe therefore get her for me to wife.

3Then his father and his mother said vnto him, Is there neuer a woman among the daughters of thy brethren, or among all my people, that thou goest to take a wife of the vncircumcised Philistines? And Samson said vnto his father, Get her for me, for shee pleaseth me well.3

4But his father and his mother knew not that it was of the Lord, that hee sought an occasion against the Philistines: for at that time the Philistines had dominion ouer Israel.

5¶ Then went Samson downe, and his father & his mother, to Timnath, and came, to the vineyards of Timnath: and behold, a young Lion roared against him.5

6And the Spirit of the Lord came mightily vpon him, and hee rent him as he would haue rent a kid, and he had nothing in his hand: but hee told not his father or his mother what hee had done.

7And hee went downe and talked with the woman, and she pleased Samson well.

9And hee tooke thereof in his handes, and went on eating, and came to his father and mother, and hee gaue them, and they did eate: but he told not them that he had taken the hony out of the carkeis of the Lion.

10¶ So his father went downe vnto the woman, and Samson made there a feast: for so vsed the young men to doe.

11And it came to passe when they saw him, that they brought thirtie companions to be with him.

12¶ And Samson said vnto them, I will now put foorth a riddle vnto you: if you can certeinly declare it me, within the seuen dayes of the feast, and finde it out, then I will giue you thirtie sheetes, and thirtie change of garments:12

13But if ye cannot declare it me, then shall yee giue me thirtie sheetes, and thirtie change of garments. And they said vnto him, Put foorth thy riddle, that we may heare it.

14And hee said vnto them, Out of the eater came foorth meate, aud out of the strong came foorth sweetnesse. And they could not in three dayes expound the riddle.

15And it came to passe on the seuenth day, that they said vnto Samsons wife, Entice thy husband, that hee may declare vnto vs the riddle, lest we burne thee and thy fathers house with fire: Haue yee called vs, to take that wee haue? is it not so?15

16And Samsons wife wept before him, and said, Thou doest but hate me, and louest me not: thou hast put foorth a riddle vnto the children of my people, and hast not tolde it me. And hee said vnto her, Behold, I haue not tolde it my father nor my mother, and shall I tell it thee?

17And shee wept before him the seuen dayes, while the feast lasted: and it came to passe on the seuenth day, that he tolde her, because shee lay sore vpon him: and she tolde the riddle to the children of her people.17

18And the men of the city said vnto him on the seuenth day before the sunne went downe, What is sweeter then honie? and what is stronger then a Lion? And he said vnto them, If ye had not plowed with my heifer, yee had not found out my riddle.

19¶ And the Spirit of the Lord came vpon him, and hee went downe to Ashkelon, and slewe thirtie men of them, and tooke their spoile, and gaue change of garments vnto them which expounded the riddle, and his anger was kindled; and hee went vp to his fathers house.19

20But Samsons wife was giuen to his companion, whom hee had vsed as his friend.