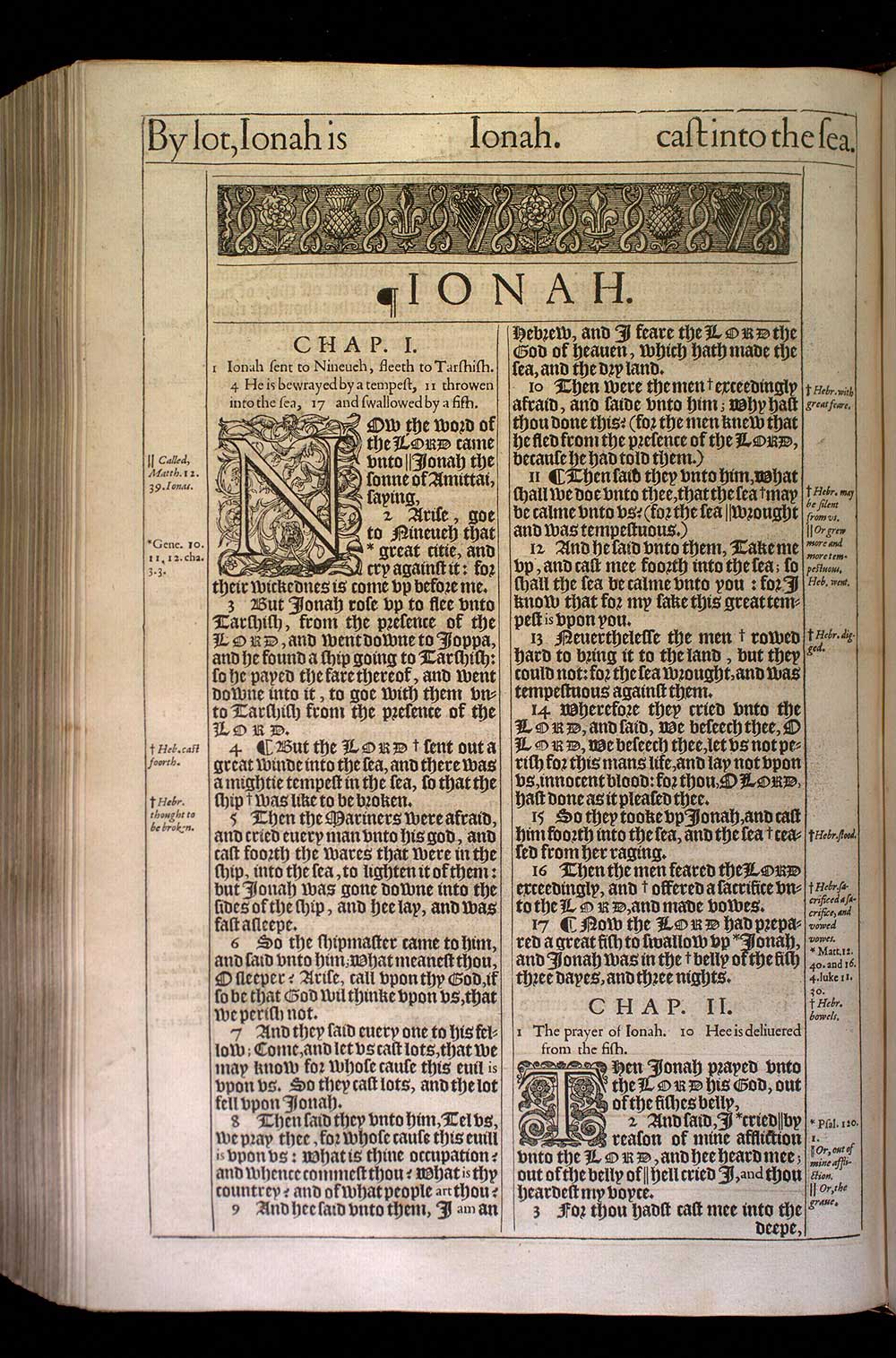 1 Ionah sent to Nineueh, fleeth to Tarshish. 4 He is bewrayed by a tempest, 11 throwen into the sea, 17 and swallowed by a fish.

1Now the word of the Lord came vnto Ionah the sonne of Amittai, saying,1

2Arise, goe to Nineueh that great citie, and cry against it: for their wickednes is come vp before me.2

4¶ But the Lord sent out a great winde into the sea, and there was a mightie tempest in the sea, so that the ship was like to be broken.4

5Then the Mariners were afraid, and cried euery man vnto his god, and cast foorth the wares that were in the ship, into the sea, to lighten it of them: but Ionah was gone downe into the sides of the ship, and hee lay, and was fast asleepe.

6So the shipmaster came to him, and said vnto him; What meanest thou, O sleeper? Arise, call vpon thy God, if so be that God wil thinke vpon vs, that we perish not.

7And they said euery one to his fellow; Come, and let vs cast lots, that we may know for whose cause this euil is vpon vs. So they cast lots, and the lot fell vpon Ionah.

8Then said they vnto him, Tel vs, we pray thee, for whose cause this euill is vpon vs: What is thine occupation? and whence commest thou? What is thy countrey? and of what people art thou?

9And hee said vnto them, I am an Hebrew, and I feare the Lord the God of heauen, which hath made the sea, and the dry land.

10Then were the men exceedingly afraid, and saide vnto him; Why hast thou done this? (for the men knew that he fled from the presence of the Lord, because he had told them.)10

11¶ Then said they vnto him, What shall we doe vnto thee, that the sea may be calme vnto vs? (for the sea wrought and was tempestuous.)11

12And he said vnto them, Take me vp, and cast mee foorth into the sea; so shall the sea be calme vnto you: for I know that for my sake this great tempest is vpon you.

13Neuerthelesse the men rowed hard to bring it to the land, but they could not: for the sea wrought, and was tempestuous against them.13

15So they tooke vp Ionah, and cast him foorth into the sea, and the sea ceased from her raging.15

16Then the men feared the Lord exceedingly, and offered a sacrifice vnto the Lord, and made vowes.16

17¶ Now the Lord had prepared a great fish to swallow vp Ionah, and Ionah was in the belly of the fish three dayes, and three nights.17