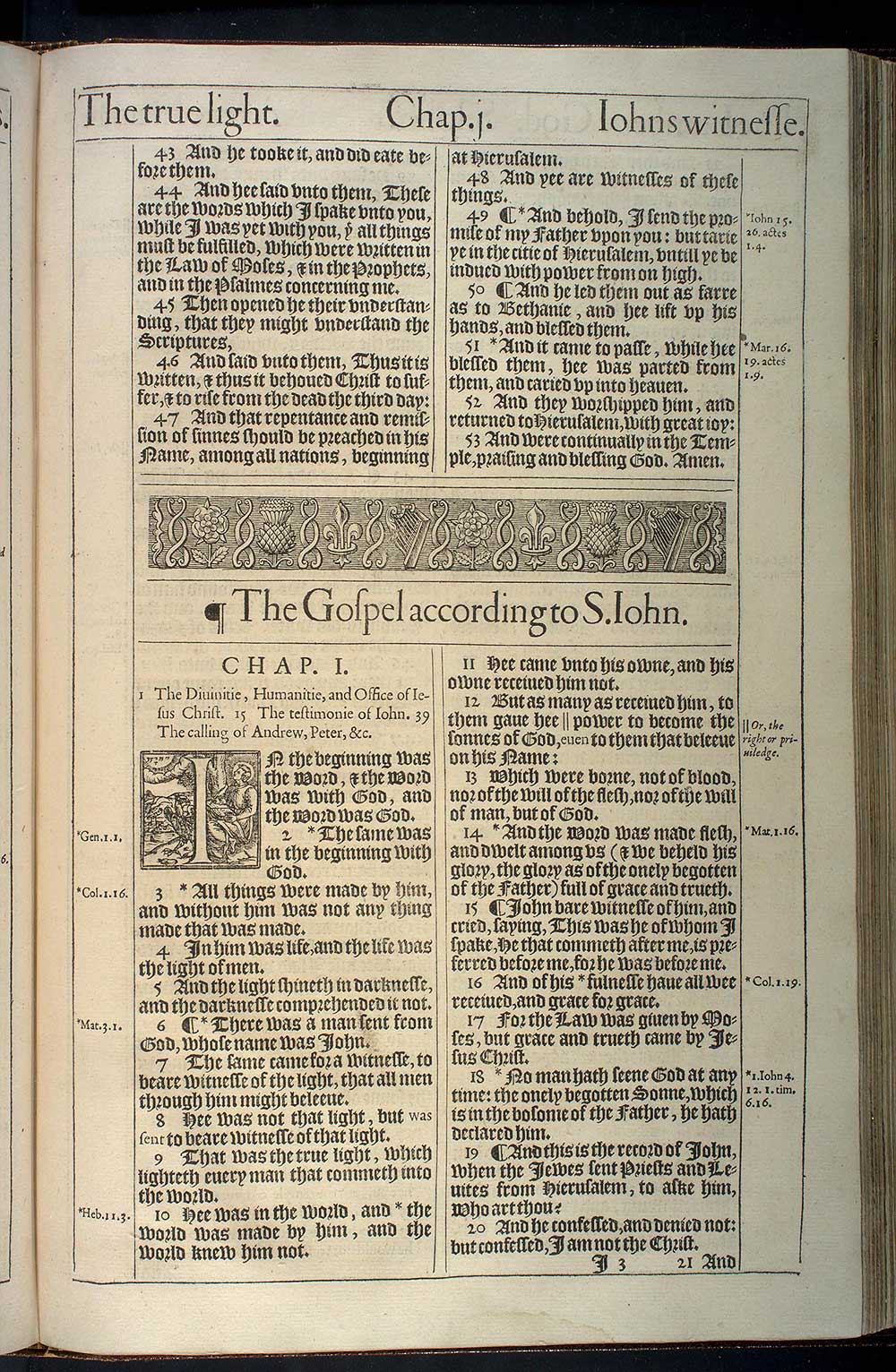 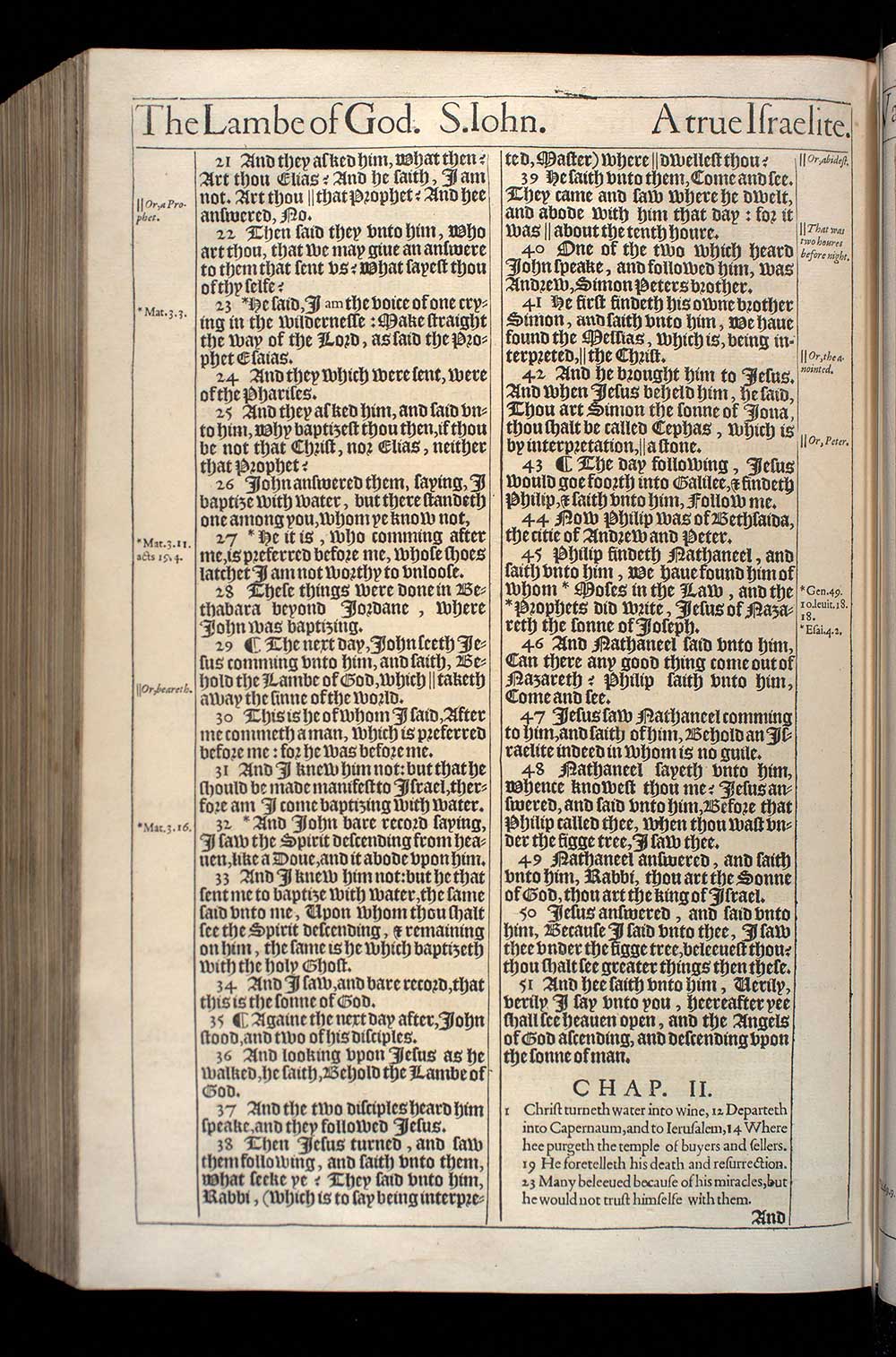 1 The Diuinitie, Humanitie, and Office of Iesus Christ. 15 The testimonie of Iohn. 39 The calling of Andrew, Peter, &c.

2The same was in the beginning with God.2

3All things were made by him, and without him was not any thing made that was made.3

4In him was life, and the life was the light of men.

5And the light shineth in darknesse, and the darknesse comprehended it not.

6¶ There was a man sent from God, whose name was Iohn.6

7The same came for a witnesse, to beare witnesse of the light, that all men through him might beleeue.

8Hee was not that light, but was sent to beare witnesse of that light.

9That was the true light, which lighteth euery man that commeth into the world.

11Hee came vnto his owne, and his owne receiued him not.

12But as many as receiued him, to them gaue hee power to become the sonnes of God, euen to them that beleeue on his Name:12

14And the Word was made flesh, and dwelt among vs (& we beheld his glory, the glory as of the onely begotten of the Father) full of grace and trueth.14

15¶ Iohn bare witnesse of him, and cried, saying, This was he of whom I spake, He that commeth after me, is preferred before me, for he was before me.

16And of his fulnesse haue all wee receiued, and grace for grace.16

17For the Law was giuen by Moses, but grace and trueth came by Iesus Christ.

18No man hath seene God at any time: the onely begotten Sonne, which is in the bosome of the Father, he hath declared him.18

19¶ And this is the record of Iohn, when the Iewes sent Priests and Leuites from Hierusalem, to aske him, Who art thou?

20And he confessed, and denied not: but confessed, I am not the Christ.

The Lambe of God.

21And they asked him, What then? Art thou Elias? And he saith, I am not. Art thou that Prophet? And hee answered, No.21

22Then said they vnto him, Who art thou, that we may giue an answere to them that sent vs? What sayest thou of thy selfe?

23He said, I am the voice of one crying in the wildernesse: Make straight the way of the Lord, as said the Prophet Esaias.23

24And they which were sent, were of the Pharises.

25And they asked him, and said vnto him, Why baptizest thou then, if thou be not that Christ, nor Elias, neither that Prophet?

26Iohn answered them, saying, I baptize with water, but there standeth one among you, whom ye know not,

27He it is, who comming after me, is preferred before me, whose shoes latchet I am not worthy to vnloose.27

28These things were done in Bethabara beyond Iordane, where Iohn was baptizing.

29¶ The next day, Iohn seeth Iesus comming vnto him, and saith, Behold the Lambe of God, which taketh away the sinne of the world.29

30This is he of whom I said, After me commeth a man, which is preferred before me: for he was before me.

31And I knew him not: but that he should be made manifest to Israel, therfore am I come baptizing with water.

32And Iohn bare record saying, I saw the Spirit descending from heauen, like a Doue, and it abode vpon him.32

33And I knew him not: but he that sent me to baptize with water, the same said vnto me, Upon whom thou shalt see the Spirit descending, & remaining on him, the same is he which baptizeth with the holy Ghost.

34And I saw, and bare record, that this is the sonne of God.

35¶ Againe the next day after, Iohn stood, and two of his disciples.

36And looking vpon Iesus as he walked, he saith, Behold the Lambe of God.

37And the two disciples heard him speake, and they followed Iesus.

38Then Iesus turned, and saw them following, and saith vnto them, What seeke ye? They said vnto him, Rabbi, (which is to say being interpreted, Master) where dwellest thou?38

39He saith vnto them, Come and see. They came and saw where he dwelt, and abode with him that day: for it was about the tenth houre.39

40One of the two which heard Iohn speake, and followed him, was Andrew, Simon Peters brother.

41He first findeth his owne brother Simon, and saith vnto him, We haue found the Messias, which is, being interpreted, the Christ.41

42And he brought him to Iesus. And when Iesus beheld him, he said, Thou art Simon the sonne of Iona, thou shalt be called Cephas, which is by interpretation, a stone.42

44Now Philip was of Bethsaida, the citie of Andrew and Peter.

45Philip findeth Nathaneel, and saith vnto him, We haue found him of whom Moses in the Law, and the Prophets did write, Iesus of Nazareth the sonne of Ioseph.45

46And Nathaneel said vnto him, Can there any good thing come out of Nazareth? Philip saith vnto him, Come and see.

47Iesus saw Nathaneel comming to him, and saith of him, Behold an Israelite indeed in whom is no guile.

48Nathaneel sayeth vnto him, Whence knowest thou me? Iesus answered, and said vnto him, Before that Philip called thee, when thou wast vnder the figge tree, I saw thee.

50Iesus answered, and said vnto him, Because I said vnto thee, I saw thee vnder the figge tree, beleeuest thou? thou shalt see greater things then these.

51And hee saith vnto him, Uerily, verily I say vnto you, heereafter yee shall see heauen open, and the Angels of God ascending, and descending vpon the sonne of man.