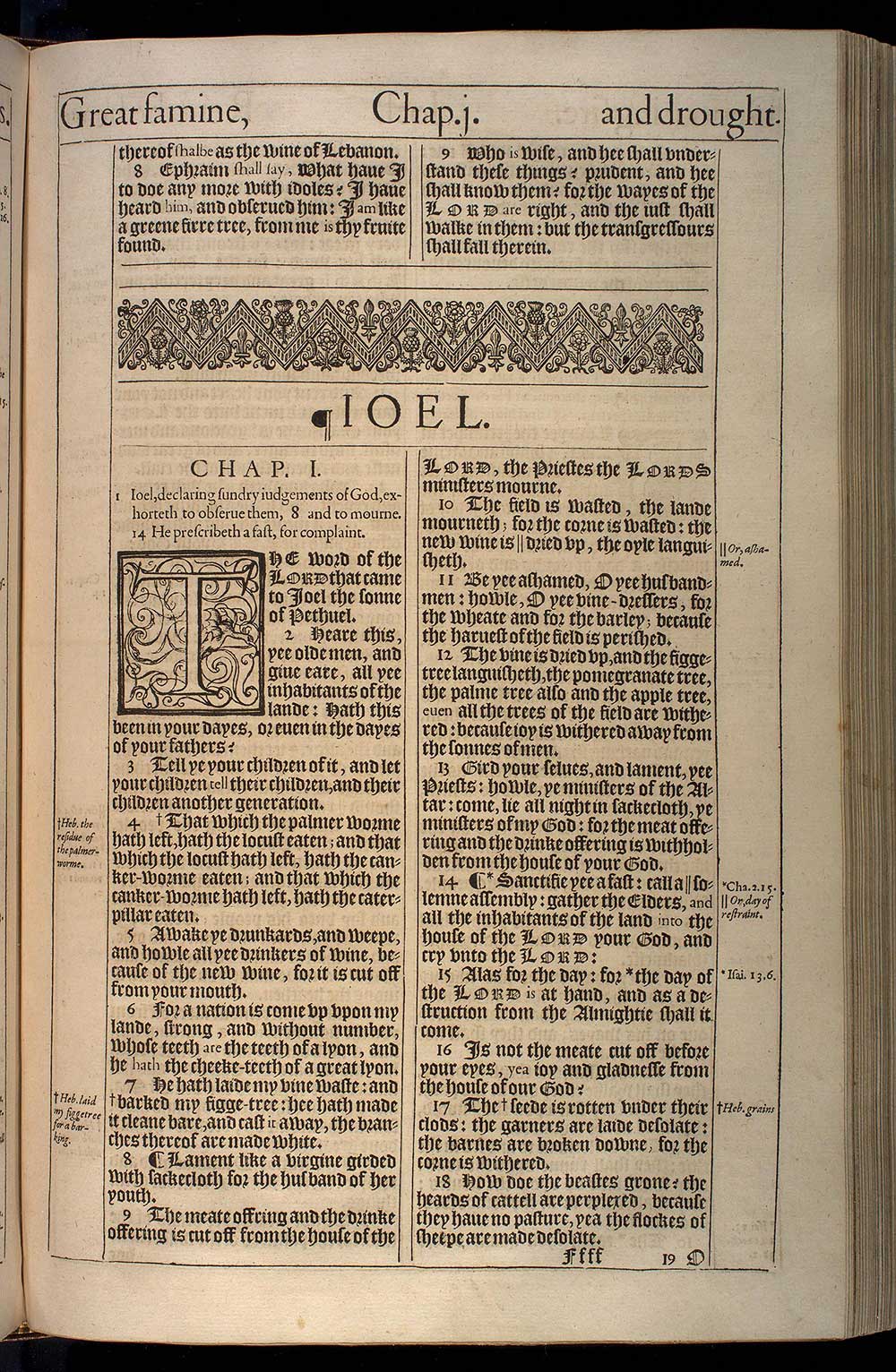 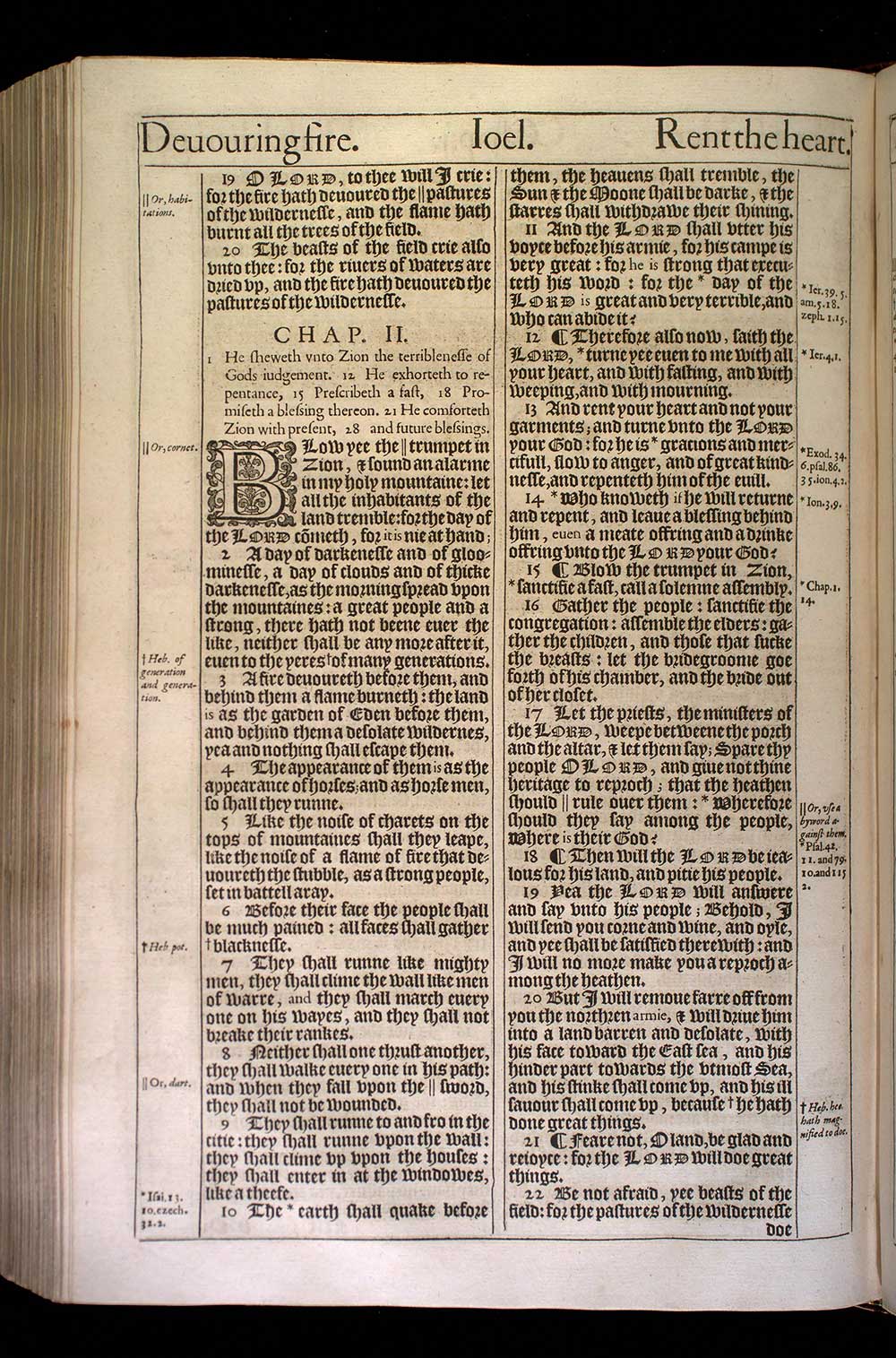 1 Ioel, declaring sundry iudgements of God, exhorteth to obserue them, 8 and to mourne. 14 He prescribeth a fast, for complaint.

1The word of the Lord that came to Ioel the sonne of Pethuel.

2Heare this, yee olde men, and giue eare, all yee inhabitants of the lande: Hath this been in your dayes, or euen in the dayes of your fathers?

5Awake ye drunkards, and weepe, and howle all yee drinkers of wine, because of the new wine, for it is cut off from your mouth.

6For a nation is come vp vpon my lande, strong, and without number, whose teeth are the teeth of a lyon, and he hath the cheeke-teeth of a great lyon.

7He hath laide my vine waste: and barked my figge-tree: hee hath made it cleane bare, and cast it away, the branches thereof are made white.7

8¶ Lament like a virgine girded with sackecloth for the husband of her youth.

9The meate offring and the drinke offering is cut off from the house of the Lord, the Priestes the Lords ministers mourne.

10The field is wasted, the lande mourneth; for the corne is wasted: the new wine is dried vp, the oyle languisheth.10

11Be yee ashamed, O yee husbandmen: howle, O yee vine-dressers, for the wheate and for the barley; because the haruest of the field is perished.

12The vine is dried vp, and the figgetree languisheth, the pomegranate tree, the palme tree also and the apple tree, euen all the trees of the field are withered: because ioy is withered away from the sonnes of men.

13Gird your selues, and lament, yee Priests: howle, ye ministers of the Altar: come, lie all night in sackecloth, ye ministers of my God: for the meat offering and the drinke offering is withholden from the house of your God.

14¶ Sanctifie yee a fast: call a solemne assembly: gather the Elders, and all the inhabitants of the land into the house of the Lord your God, and cry vnto the Lord:14

15Alas for the day: for the day of the Lord is at hand, and as a destruction from the Almightie shall it come.15

16Is not the meate cut off before your eyes, yea ioy and gladnesse from the house of our God?

17The seede is rotten vnder their clods: the garners are laide desolate: the barnes are broken downe, for the corne is withered.17

18How doe the beastes grone? the heards of cattell are perplexed, because they haue no pasture, yea the flockes of sheepe are made desolate.

19O Lord, to thee will I crie: for the fire hath deuoured the pastures of the wildernesse, and the flame hath burnt all the trees of the field.19

20The beasts of the field crie also vnto thee: for the riuers of waters are dried vp, and the fire hath deuoured the pastures of the wildernesse.