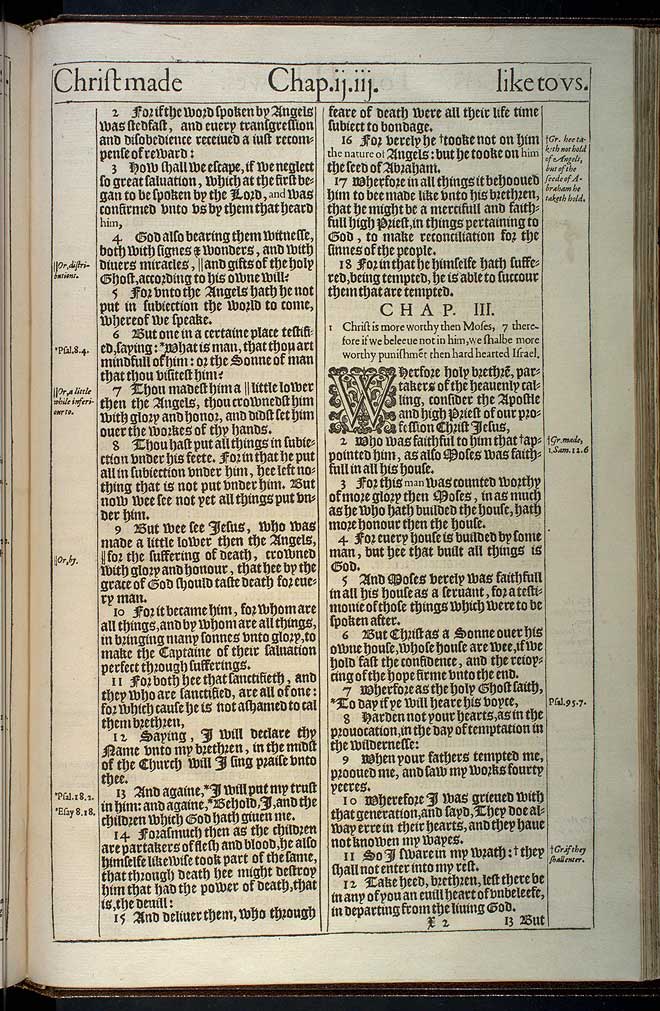 1 Wee ought to bee obedient to Christ Iesus, 5 and that because he vouchsafed to take our nature vpon him, 14 as it was necessarie.

1 Therefore we ought to giue the more earnest heede to the things which we haue heard, lest at any time we should let them slip.1

2 For if the word spoken by Angels was stedfast, and euery transgression and disobedience receiued a iust recompense of reward:

3 How shall we escape, if we neglect so great saluation, which at the first began to be spoken by the Lord, and was confirmed vnto vs by them that heard him,

4 God also bearing them witnesse, both with signes & wonders, and with diuers miracles, and gifts of the holy Ghost, according to his owne will?4

5 For vnto the Angels hath he not put in subiection the world to come, whereof we speake.

6 But one in a certaine place testified, saying: What is man, that thou art mindfull of him: or the Sonne of man that thou visitest him?6

7 Thou madest him a little lower then the Angels, thou crownedst him with glory and honor, and didst set him ouer the workes of thy hands.7

9 But wee see Iesus, who was made a little lower then the Angels, for the suffering of death, crowned with glory and honour, that hee by the grace of God should taste death for euery man.9

11 For both hee that sanctifieth, and they who are sanctified, are all of one: for which cause he is not ashamed to cal them brethren,

12 Saying, I will declare thy Name vnto my brethren, in the midst of the Church will I sing praise vnto thee.

13 And againe, I will put my trust in him: and againe, Behold, I, and the children which God hath giuen me.13

14 Forasmuch then as the children are partakers of flesh and blood, he also himselfe likewise took part of the same, that through death hee might destroy him that had the power of death, that is, the deuill:

15 And deliuer them, who through feare of death were all their life time subiect to bondage.

16 For verely he tooke not on him the nature of Angels: but he tooke on him the seed of Abraham.16

17 Wherfore in all things it behooued him to bee made like vnto his brethren, that he might be a mercifull and faithfull high Priest, in things pertaining to God, to make reconciliation for the sinnes of the people.

18 For in that he himselfe hath suffered, being tempted, he is able to succour them that are tempted.