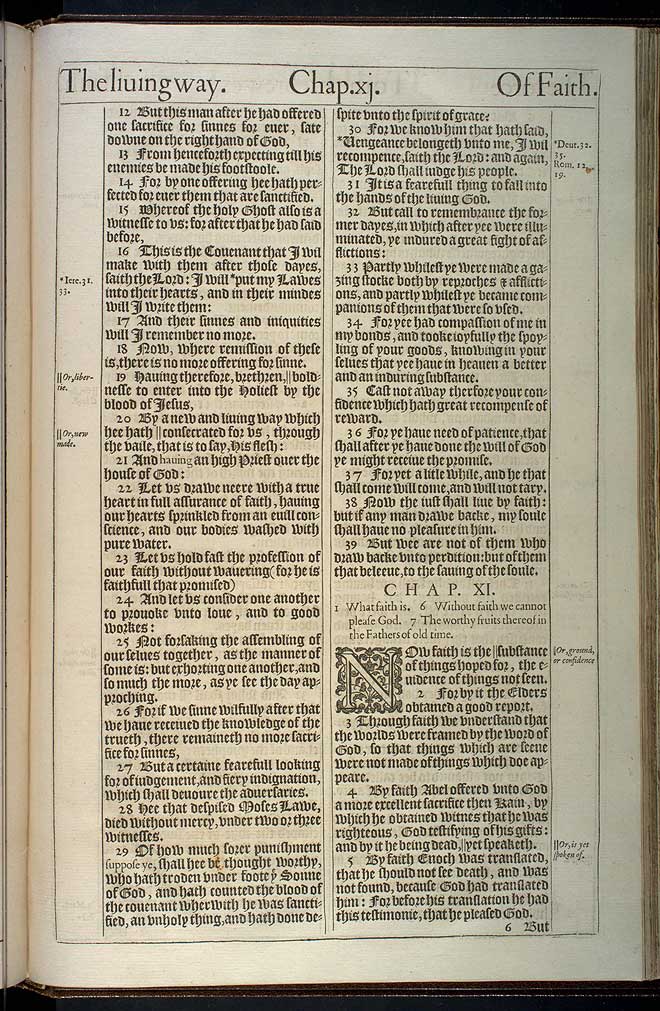 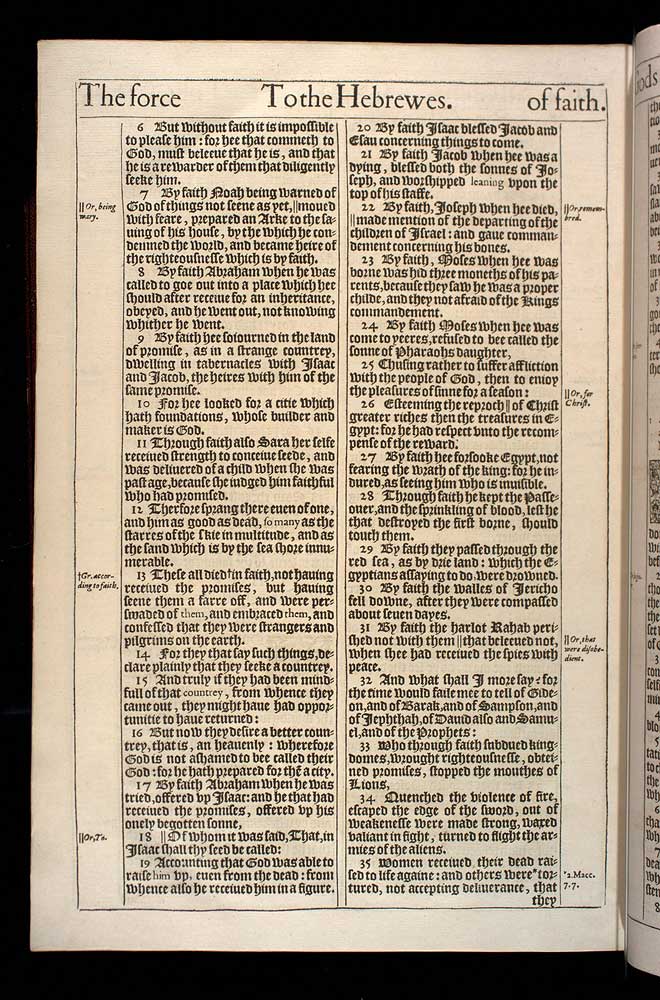 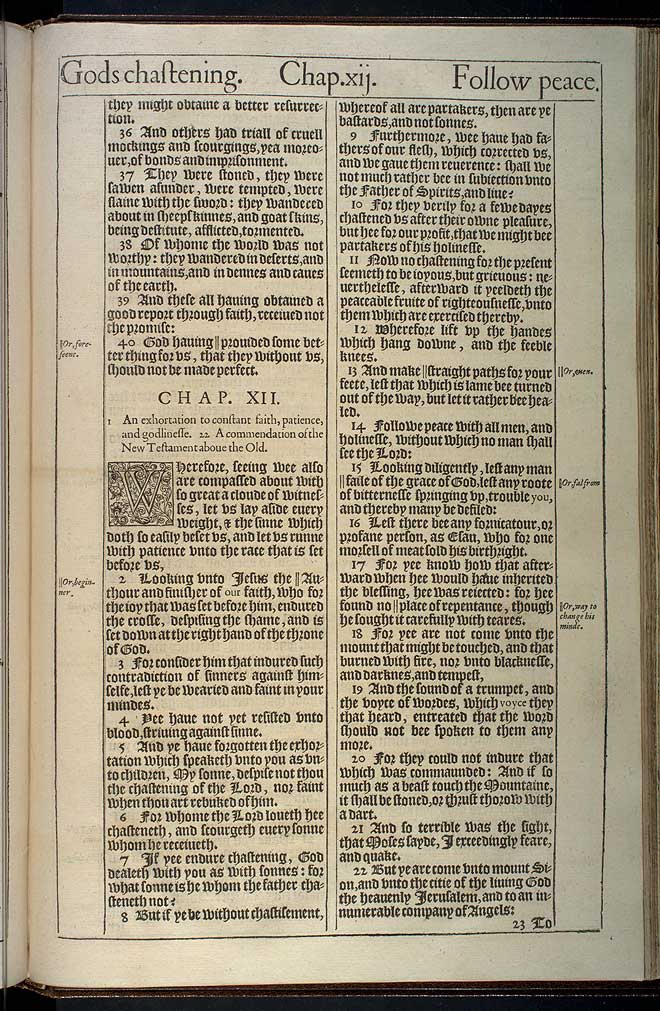 1 What faith is. 6 Without faith we cannot please God. 7 The worthy fruits thereof in the Fathers of old time.

2 For by it the Elders obtained a good report.

3 Through faith we vnderstand that the worlds were framed by the word of God, so that things which are seene were not made of things which doe appeare.

4 By faith Abel offered vnto God a more excellent sacrifice then Kain, by which he obtained witnes that he was righteous, God testifying of his gifts: and by it he being dead, yet speaketh.4

5 By faith Enoch was translated, that he should not see death, and was not found, because God had translated him: For before his translation he had this testimonie, that he pleased God.

6 But without faith it is impossible to please him: for hee that commeth to God, must beleeue that he is, and that he is a rewarder of them that diligently seeke him.

7 By faith Noah being warned of God of things not seene as yet, moued with feare, prepared an Arke to the sauing of his house, by the which he condemned the world, and became heire of the righteousnesse which is by faith.7

8 By faith Abraham when he was called to goe out into a place which hee should after receiue for an inheritance, obeyed, and he went out, not knowing whither he went.

9 By faith hee soiourned in the land of promise, as in a strange countrey, dwelling in tabernacles with Isaac and Iacob, the heires with him of the same promise.

10 For hee looked for a citie which hath foundations, whose builder and maker is God.

11 Through faith also Sara her selfe receiued strength to conceiue seede, and was deliuered of a child when she was past age, because she iudged him faithful who had promised.

12 Therfore sprang there euen of one, and him as good as dead, so many as the starres of the skie in multitude, and as the sand which is by the sea shore innumerable.

13 These all died in faith, not hauing receiued the promises, but hauing seene them a farre off, and were perswaded of them, and embraced them, and confessed that they were strangers and pilgrims on the earth.13

14 For they that say such things, declare plainly that they seeke a countrey.

15 And truly if they had been mindfull of that countrey, from whence they came out, they might haue had opportunitie to haue returned:

16 But now they desire a better countrey, that is, an heauenly: wherefore God is not ashamed to bee called their God: for he hath prepared for thē a city.

17 By faith Abraham when he was tried, offered vp Isaac: and he that had receiued the promises, offered vp his onely begotten sonne,

19 Accounting that God was able to raise him vp, euen from the dead: from whence also he receiued him in a figure.

21 By faith Iacob when hee was a dying, blessed both the sonnes of Ioseph, and worshipped leaning vpon the top of his staffe.

22 By faith, Ioseph when hee died, made mention of the departing of the children of Israel: and gaue commandement concerning his bones.22

23 By faith; Moses when hee was borne was hid three moneths of his parents, because they saw he was a proper childe, and they not afraid of the Kings commandement.

24 By faith Moses when hee was come to yeeres, refused to bee called the sonne of Pharaohs daughter,

25 Chusing rather to suffer affliction with the people of God, then to enioy the pleasures of sinne for a season:

26 Esteeming the reproch of Christ greater riches then the treasures in Egypt: for he had respect vnto the recompense of the reward.26

27 By faith hee forsooke Egypt, not fearing the wrath of the king: for he indured, as seeing him who is inuisible.

28 Through faith he kept the Passeouer, and the sprinkling of blood, lest he that destroyed the first borne, should touch them.

29 By faith they passed through the red sea, as by drie land: which the Egyptians assaying to do, were drowned.

30 By faith the walles of Iericho fell downe, after they were compassed about seuen dayes.

31 By faith the harlot Rahab perished not with them that beleeued not, when shee had receiued the spies with peace.31

32 And what shall I more say? for the time would faile mee to tell of Gideon, and of Barak, and of Sampson, and of Iephthah, of Dauid also and Samuel, and of the Prophets:

34 Quenched the violence of fire, escaped the edge of the sword, out of weakenesse were made strong, waxed valiant in fight, turned to flight the armies of the aliens.

35 Women receiued their dead raised to life againe: and others were tortured, not accepting deliuerance, that they might obtaine a better resurrection.35

36 And others had triall of cruell mockings and scourgings, yea moreouer, of bonds and imprisonment.

37 They were stoned, they were sawen asunder, were tempted, were slaine with the sword: they wandered about in sheepskinnes, and goat skins, being destitute, afflicted, tormented.

38 Of whome the world was not worthy: they wandered in deserts, and in mountains, and in dennes and caues of the earth.

39 And these all hauing obtained a good report through faith, receiued not the promise:

40 God hauing prouided some better thing for vs, that they without vs, should not be made perfect.40