1 And God blessed Noah and his sons, and said unto them, Be fruitful, and multiply, and replenish the earth.

3 Every moving thing that liveth shall be meat for you; even as the green herb have I given you all things.

4 But flesh with the life thereof, which is the blood thereof, shall ye not eat.

6 Whoso sheddeth man's blood, by man shall his blood be shed: for in the image of God made he man.

8 And God spake unto Noah, and to his sons with him, saying,

9 And I, behold, I establish my covenant with you, and with your seed after you;

12 And God said, This is the token of the covenant which I make between me and you and every living creature that is with you, for perpetual generations:

13 I do set my bow in the cloud, and it shall be for a token of a covenant between me and the earth.

14 And it shall come to pass, when I bring a cloud over the earth, that the bow shall be seen in the cloud:

15 And I will remember my covenant, which is between me and you and every living creature of all flesh; and the waters shall no more become a flood to destroy all flesh.

16 And the bow shall be in the cloud; and I will look upon it, that I may remember the everlasting covenant between God and every living creature of all flesh that is upon the earth.

17 And God said unto Noah, This is the token of the covenant, which I have established between me and all flesh that is upon the earth.

18 And the sons of Noah, that went forth of the ark, were Shem, and Ham, and Japheth: and Ham is the father of Canaan.

19 These are the three sons of Noah: and of them was the whole earth overspread.

20 And Noah began to be an husbandman, and he planted a vineyard:

21 And he drank of the wine, and was drunken; and he was uncovered within his tent.

22 And Ham, the father of Canaan, saw the nakedness of his father, and told his two brethren without.

24 And Noah awoke from his wine, and knew what his younger son had done unto him.

25 And he said, Cursed be Canaan; a servant of servants shall he be unto his brethren.

26 And he said, Blessed be the LORD God of Shem; and Canaan shall be his servant.

27 God shall enlarge Japheth, and he shall dwell in the tents of Shem; and Canaan shall be his servant.

28 And Noah lived after the flood three hundred and fifty years.

29 And all the days of Noah were nine hundred and fifty years: and he died.

God blesses Noah, and grants flesh for food. (1-3) Blood, and murder forbidden. (4-7) God's covenant by the rainbow. (8-17) Noah plants a vineyard, is drunken and mocked by Ham. (18-23) Noah curses Canaan, blesses Shem, prays for Japheth, His death. (24-29)1-3 The blessing of God is the cause of our doing well. On him we depend, to him we should be thankful. Let us not forget the advantage and pleasure we have from the labour of beasts, and which their flesh affords. Nor ought we to be less thankful for the security we enjoy from the savage and hurtful beasts, through the fear of man which God has fixed deep in them. We see the fulfilment of this promise every day, and on every side. This grant of the animals for food fully warrants the use of them, but not the abuse of them by gluttony, still less by cruelty. We ought not to pain them needlessly whilst they live, nor when we take away their lives.

4-7 The main reason of forbidding the eating of blood, doubtless was because the shedding of blood in sacrifices was to keep the worshippers in mind of the great atonement; yet it seems intended also to check cruelty, lest men, being used to shed and feed upon the blood of animals, should grow unfeeling to them, and be less shocked at the idea of shedding human blood. Man must not take away his own life. Our lives are God's, and we must only give them up when he pleases. If we in any way hasten our own death, we are accountable to God for it. When God requires the life of a man from him that took it away unjustly, the murderer cannot render that, and therefore must render his own instead. One time or other, in this world or in the next, God will discover murders, and punish those murders which are beyond man's power to punish. But there are those who are ministers of God to protect the innocent, by being a terror to evil-doers, and they must not bear the sword in vain, #Ro 13:4|. Wilful murder ought always to be punished with death. To this law there is a reason added. Such remains of God's image are still upon fallen man, that he who unjustly kills a man, defaces the image of God, and does dishonour to him.

8-17 As the old world was ruined, to be a monument of justice, so this world remains to this day a monument of mercy. But sin, that drowned the old world, will burn this. Articles of agreement among men are sealed, that what is promised may be the more solemn, and the doing of what is covenanted the more sure to mutual satisfaction. The seal of this covenant was the rainbow, which, it is likely, was seen in the clouds before, but was never a seal of the covenant till now it was made so. The rainbow appears when we have most reason to fear the rain prevailing; God then shows this seal of the promise, that it shall not prevail. The thicker the cloud, the brighter the bow in the cloud. Thus, as threatening afflictions abound, encouraging consolations much more abound. The rainbow is the reflection of the beams of the sun shining upon or through the drops of rain: all the glory of the seals of the covenant are derived from Christ, the Sun of righteousness. And he will shed a glory on the tears of his saints. A bow speaks terror, but this has neither string nor arrow; and a bow alone will do little hurt. It is a bow, but it is directed upward, not toward the earth; for the seals of the covenant were intended to comfort, not to terrify. As God looks upon the bow, that he may remember the covenant, so should we, that we may be mindful of the covenant with faith and thankfulness. Without revelation this gracious assurance could not be known; and without faith it can be of no use to us; and thus it is as to the still greater dangers to which all are exposed, and as to the new covenant with its blessings.

18-23 The drunkenness of Noah is recorded in the Bible, with that fairness which is found only in the Scripture, as a case and proof of human weakness and imperfection, even though he may have been surprised into the sin; and to show that the best of men cannot stand upright, unless they depend upon Divine grace, and are upheld thereby. Ham appears to have been a bad man, and probably rejoiced to find his father in an unbecoming situation. It was said of Noah, that he was perfect in his generations, ch. 6:9|; but this is meant of sincerity, not of a sinless perfection. Noah, who had kept sober in drunken company, is now drunk in sober company. Let him that thinks he stands, take heed lest he fall. We have need to be very careful when we use God's good creatures plentifully, lest we use them to excess, #Lu 21:34|. The consequence of Noah's sin was shame. Observe here the great evil of the sin of drunkenness. It discovers men; what infirmities they have, they betray when they are drunk; and secrets are then easily got out of them. Drunken porters keep open gates. It disgraces men, and exposes them to contempt. As it shows them, so it shames them. Men say and do that when drunken, which, when sober, they would blush to think of. Notice the care of Shem and Japheth to cover their father's shame. There is a mantle of love to be thrown over the faults of all, 1Pe 4:8|. Beside that, there is a robe of reverence to be thrown over the faults of parents and other superiors. The blessing of God attends on those who honour their parents, and his curse lights especially on those who dishonour them.

24-29 Noah declares a curse on Canaan, the son of Ham; perhaps this grandson of his was more guilty than the rest. A servant of servants, that is, The meanest and most despicable servant, shall he be, even to his brethren. This certainly points at the victories in after-times obtained by Israel over the Canaanites, by which they were put to the sword, or brought to pay tribute. The whole continent of Africa was peopled mostly by the descendants of Ham; and for how many ages have the better parts of that country lain under the dominion of the Romans, then of the Saracens, and now of the Turks! In what wickedness, ignorance, barbarity, slavery, and misery most of the inhabitants live! And of the poor negroes, how many every year are sold and bought, like beasts in the market, and conveyed from one quarter of the world to do the work of beasts in another! But this in no way excuses the covetousness and barbarity of those who enrich themselves with the product of their sweat and blood. God has not commanded us to enslave negroes; and, without doubt, he will severely punish all such cruel wrongs. The fulfilment of this prophecy, which contains almost a history of the world, frees Noah from the suspicion of having uttered it from personal anger. It fully proves that the Holy Spirit took occasion from Ham's offence to reveal his secret purposes. "Blessed be the Lord God of Shem." The church should be built up and continued in the posterity of Shem; of him came the Jews, who were, for a great while, the only professing people God had in the world. Christ, who was the Lord God, in his human nature should descend from Shem; for of him, as concerning the flesh, Christ came. Noah also blesses Japheth, and, in him, the isles of the gentiles that were peopled by his seed. It speaks of the conversion of the gentiles, and the bringing of them into the church. We may read it, "God shall persuade Japheth, and being persuaded, he shall dwell in the tents of Shem." Jews and gentiles shall be united together in the gospel fold; both shall be one in Christ. Noah lived to see two worlds; but being an heir of the righteousness which is by faith, he now rests in hope, waiting to see a better than either.

View All Discussion for Genesis Chapter 9... 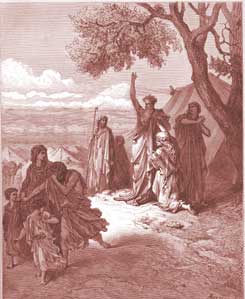