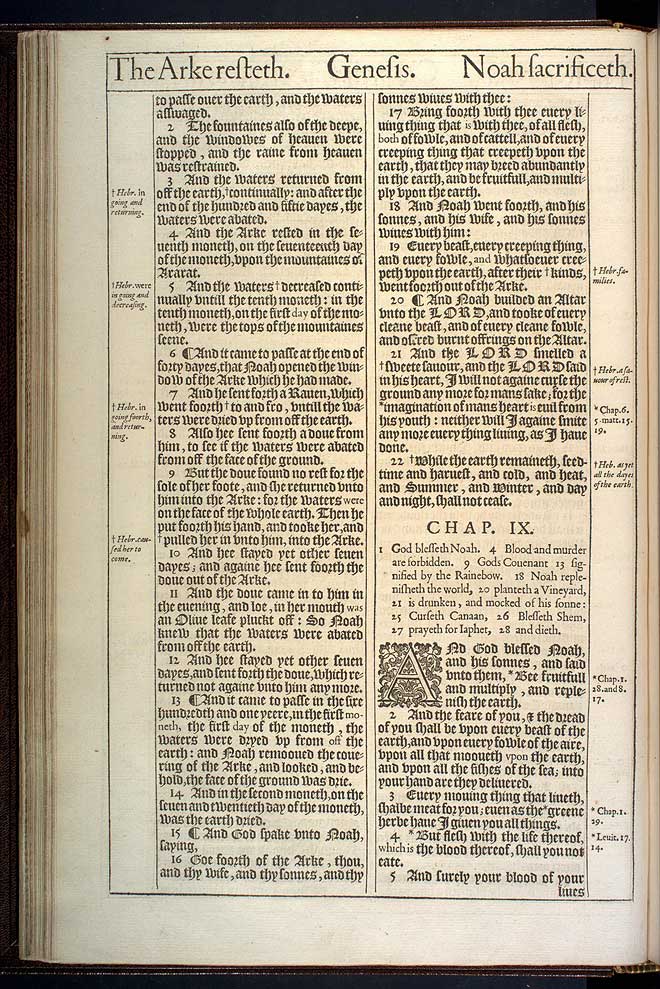 View this Genesis chapter 8 scan at a larger size

1 The waters asswage. 4 The Arke resteth on Ararat. 7 The rauen and the doue. 15 Noah, being commanded, 18 goeth forth of the Arke. 20 He buildeth an Altar, and offereth sacrifice, 21 which God accepteth, and promiseth to curse the earth no more.

1 And God remembred Noah, and euery liuing thing, and all the cattell that was with him in the Arke: and God made a winde to passe ouer the earth, and the waters asswaged.

2 The fountaines also of the deepe, and the windowes of heauen were stopped, and the raine from heauen was restrained.

3 And the waters returned from off the earth, continually: and after the end of the hundred and fiftie dayes, the waters were abated.3

4 And the Arke rested in the seuenth moneth, on the seuenteenth day of the moneth, vpon the mountaines of Ararat.

6 ¶ And it came to passe at the end of forty dayes, that Noah opened the window of the Arke which he had made.

7 And he sent forth a Rauen, which went foorth to and fro, vntill the waters were dried vp from off the earth.7

8 Also hee sent foorth a doue from him, to see if the waters were abated from off the face of the ground.

9 But the doue found no rest for the sole of her foote, and she returned vnto him into the Arke: for the waters were on the face of the whole earth. Then he put foorth his hand, and tooke her, and pulled her in vnto him, into the Arke.9

10 And hee stayed yet other seuen dayes; and againe hee sent foorth the doue out of the Arke.

11 And the doue came in to him in the euening, and loe, in her mouth was an Oliue leafe pluckt off: So Noah knew that the waters were abated from off the earth.

12 And hee stayed yet other seuen dayes, and sent forth the doue, which returned not againe vnto him any more.

13 ¶ And it came to passe in the sixe hundredth and one yeere, in the first moneth, the first day of the moneth, the waters were dryed vp from off the earth: and Noah remooued the couering of the Arke, and looked, and behold, the face of the ground was drie.

14 And in the second moneth, on the seuen and twentieth day of the moneth, was the earth dried.

19 Euery beast, euery creeping thing, and euery fowle, and whatsoeuer creepeth vpon the earth, after their kinds, went foorth out of the Arke.19

21 And the LORD smelled a sweete sauour, and the LORD said in his heart, I will not againe curse the ground any more for mans sake; for the imagination of mans heart is euil from his youth: neither will I againe smite any more euery thing liuing, as I haue done.21

22 While the earth remaineth, seed-time and haruest, and cold, and heat, and Summer, and Winter, and day and night, shall not cease.22