1 And the LORD said unto Noah, Come thou and all thy house into the ark; for thee have I seen righteous before me in this generation.

3 Of fowls also of the air by sevens, the male and the female; to keep seed alive upon the face of all the earth.

4 For yet seven days, and I will cause it to rain upon the earth forty days and forty nights; and every living substance that I have made will I destroy from off the face of the earth.

5 And Noah did according unto all that the LORD commanded him.

6 And Noah was six hundred years old when the flood of waters was upon the earth.

7 And Noah went in, and his sons, and his wife, and his sons' wives with him, into the ark, because of the waters of the flood.

8 Of clean beasts, and of beasts that are not clean, and of fowls, and of every thing that creepeth upon the earth,

9 There went in two and two unto Noah into the ark, the male and the female, as God had commanded Noah.

10 And it came to pass after seven days, that the waters of the flood were upon the earth.

11 In the six hundredth year of Noah's life, in the second month, the seventeenth day of the month, the same day were all the fountains of the great deep broken up, and the windows of heaven were opened.

12 And the rain was upon the earth forty days and forty nights.

13 In the selfsame day entered Noah, and Shem, and Ham, and Japheth, the sons of Noah, and Noah's wife, and the three wives of his sons with them, into the ark;

15 And they went in unto Noah into the ark, two and two of all flesh, wherein is the breath of life.

16 And they that went in, went in male and female of all flesh, as God had commanded him: and the LORD shut him in.

17 And the flood was forty days upon the earth; and the waters increased, and bare up the ark, and it was lift up above the earth.

18 And the waters prevailed, and were increased greatly upon the earth; and the ark went upon the face of the waters.

19 And the waters prevailed exceedingly upon the earth; and all the high hills, that were under the whole heaven, were covered.

20 Fifteen cubits upward did the waters prevail; and the mountains were covered.

22 All in whose nostrils was the breath of life, of all that was in the dry land, died.

23 And every living substance was destroyed which was upon the face of the ground, both man, and cattle, and the creeping things, and the fowl of the heaven; and they were destroyed from the earth: and Noah only remained alive, and they that were with him in the ark.

24 And the waters prevailed upon the earth an hundred and fifty days.

Noah, and his family and the living creatures, enter the ark, and the flood begins. (1-12) Noah shut in the ark. (13-16) The increase of the flood for forty days. (17-20) All flesh is destroyed by the flood. (21-24)1-12 The call to Noah is very kind, like that of a tender father to his children to come in-doors when he sees night or a storm coming. Noah did not go into the ark till God bade him, though he knew it was to be his place of refuge. It is very comfortable to see God going before us in every step we take. Noah had taken a great deal of pains to build the ark, and now he was himself kept alive in it. What we do in obedience to the command of God, and in faith, we ourselves shall certainly have the comfort of, first or last. This call to Noah reminds us of the call the gospel gives to poor sinners. Christ is an ark, in whom alone we can be safe, when death and judgment approach. The word says, "Come;" ministers say, "Come;" the Spirit says, "Come, come into the Ark." Noah was accounted righteous, not for his own righteousness, but as an heir of the righteousness which is by faith, #Heb 11:7|. He believed the revelation of a saviour, and sought and expected salvation through Him alone. Thus was he justified by faith, and received that Spirit whose fruit is in all goodness; but if any man have not the Spirit of Christ, he is none of his. After the hundred and twenty years, God granted seven days' longer space for repentance. But these seven days were trifled away, like all the rest. It shall be but seven days. They had only one week more, one sabbath more to improve, and to consider the things that belonged to their peace. But it is common for those who have been careless of their souls during the years of their health, when they have looked upon death at a distance, to be as careless during the days, the few days of their sickness, when they see death approaching; their hearts being hardened by the deceitfulness of sin. As Noah prepared the ark by faith in the warning given that the flood would come, so he went into it, by faith in this warning that it would come quickly. And on the day Noah was securely fixed in the ark, the fountains of the great deep were broken up. The earth had within it those waters, which, at God's command, sprang up and flooded it; and thus our bodies have in themselves those humours, which, when God pleases, become the seeds and springs of mortal diseases. The windows of heaven were opened, and the waters which were above the firmament, that is, in the air, were poured out upon the earth. The rain comes down in drops; but such rains fell then, as were never known before or since. It rained without stop or abatement, forty days and forty nights, upon the whole earth at once. As there was a peculiar exercise of the almighty power of God in causing the flood, it is vain and presumptuous to attempt explaining the method of it, by human wisdom.

13-16 The ravenous creatures were made mild and manageable; yet, when this occasion was over, they were of the same kind as before; for the ark did not alter their natures. Hypocrites in the church, who outwardly conform to the laws of that ark, are yet unchanged; and it will appear, one time or other, what kind they are after. God continued his care of Noah. God shut the door, to secure him and keep him safe in the ark; also to keep all others for ever out. In what manner this was done, God has not been pleased to make known. There is much of our gospel duty and privilege to be seen in Noah's safety in the ark. The apostle makes it a type of christian baptism, #1Pe 3:20,21|. Observe then, it is our great duty, in obedience to the gospel call, by a lively faith in Christ, to come into that way of salvation which God has provided for poor sinners. Those that come into the ark, should bring as many as they can with them, by good instructions, by persuasions, and by good examples. There is room enough in Christ for all comers. God put Adam into paradise, but did not shut him in, so he threw himself out; but when God put Noah into the ark, and so when he brings a soul to Christ, the salvation is sure: it is not in our own keeping, but in the Mediator's hand. But the door of mercy will shortly be shut against those that now make light of it. Knock now, and it shall be opened, #Lu 13:25|.

17-20 The flood was increasing forty days. The waters rose so high, that the tops of the highest mountains were overflowed more than twenty feet. There is no place on earth so high as to set men out of the reach of God's judgments. God's hand will find out all his enemies, #Ps 21:8|. When the flood thus increased, Noah's ark was lifted up, and the waters which broke down every thing else, bore up the ark. That which to unbelievers betokens death unto death, to the faithful betokens life unto life.

21-24 All the men, women, and children, that were in the world, excepting those in the ark, died. We may easily imagine what terror seized them. Our Saviour tells us, that till the very day that the flood came, they were eating and drinking, #Lu 17:26,27|; they were deaf and blind to all Divine warnings. In this posture death surprised them. They were convinced of their folly when it was too late. We may suppose they tried all ways and means possible to save themselves, but all in vain. And those that are not found in Christ, the Ark, are certainly undone, undone for ever. Let us pause, and consider this tremendous judgment! Who can stand before the Lord when he is angry? The sin of sinners will be their ruin, first or last, if not repented of. The righteous God knows how to bring ruin upon the world of the ungodly, #2Pe 2:5|. How tremendous will be the day of judgment and perdition of ungodly men! Happy they who are part of Christ's family, and safe with him as such; they may look forward without dismay, and rejoice that they shall triumph, when fire shall burn up the earth, and all that therein is. We are apt to suppose some favourable distinctions in our own case or character; but if we neglect, refuse, or abuse the salvation of Christ, we shall, notwithstanding such fancied advantages, be destroyed in the common ruin of an unbelieving world. 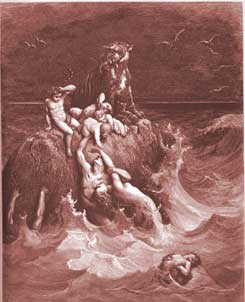