1 And it came to pass, when men began to multiply on the face of the earth, and daughters were born unto them,

2 That the sons of God saw the daughters of men that they were fair; and they took them wives of all which they chose.

3 And the LORD said, My spirit shall not always strive with man, for that he also is flesh: yet his days shall be an hundred and twenty years.

4 There were giants in the earth in those days; and also after that, when the sons of God came in unto the daughters of men, and they bare children to them, the same became mighty men which were of old, men of renown.

5 And GOD saw that the wickedness of man was great in the earth, and that every imagination of the thoughts of his heart was only evil continually.

6 And it repented the LORD that he had made man on the earth, and it grieved him at his heart.

7 And the LORD said, I will destroy man whom I have created from the face of the earth; both man, and beast, and the creeping thing, and the fowls of the air; for it repenteth me that I have made them.

8 But Noah found grace in the eyes of the LORD.

9 These are the generations of Noah: Noah was a just man and perfect in his generations, and Noah walked with God.

11 The earth also was corrupt before God, and the earth was filled with violence.

13 And God said unto Noah, The end of all flesh is come before me; for the earth is filled with violence through them; and, behold, I will destroy them with the earth.

14 Make thee an ark of gopher wood; rooms shalt thou make in the ark, and shalt pitch it within and without with pitch.

15 And this is the fashion which thou shalt make it of: The length of the ark shall be three hundred cubits, the breadth of it fifty cubits, and the height of it thirty cubits.

17 And, behold, I, even I, do bring a flood of waters upon the earth, to destroy all flesh, wherein is the breath of life, from under heaven; and every thing that is in the earth shall die.

18 But with thee will I establish my covenant; and thou shalt come into the ark, thou, and thy sons, and thy wife, and thy sons' wives with thee.

19 And of every living thing of all flesh, two of every sort shalt thou bring into the ark, to keep them alive with thee; they shall be male and female.

21 And take thou unto thee of all food that is eaten, and thou shalt gather it to thee; and it shall be for food for thee, and for them.

22 Thus did Noah; according to all that God commanded him, so did he.

The wickedness of the world which provoked God's wrath. (1-7) Noah finds grace. (8-11) Noah warned of the flood, The directions respecting the ark. (12-21) Noah's faith and obedience. (22)1-7 The most remarkable thing concerning the old world, is the destroying of it by the deluge, or flood. We are told of the abounding iniquity of that wicked world: God's just wrath, and his holy resolution to punish it. In all ages there has been a peculiar curse of God upon marriages between professors of true religion and its avowed enemies. The evil example of the ungodly party corrupts or greatly hurts the other. Family religion is put an end to, and the children are trained up according to the worldly maxims of that parent who is without the fear of God. If we profess to be the sons and daughters of the Lord Almighty, we must not marry without his consent. He will never give his blessing, if we prefer beauty, wit, wealth, or worldly honours, to faith and holiness. The Spirit of God strove with men, by sending Enoch, Noah, and perhaps others, to preach to them; by waiting to be gracious, notwithstanding their rebellions; and by exciting alarm and convictions in their consciences. But the Lord declared that his Spirit should not thus strive with men always; he would leave them to be hardened in sin, and ripened for destruction. This he determined on, because man was flesh: not only frail and feeble, but carnal and depraved; having misused the noble powers of his soul to gratify his corrupt inclinations. God sees all the wickedness that is among the children of men; it cannot be hid from him now; and if it be not repented of, it shall be made known by him shortly. The wickedness of a people is great indeed, when noted sinners are men renowned among them. Very much sin was committed in all places, by all sorts of people. Any one might see that the wickedness of man was great: but God saw that every imagination, or purpose, of the thoughts of man's heart, was only evil continually. This was the bitter root, the corrupt spring. The heart was deceitful and desperately wicked; the principles were corrupt; the habits and dispositions evil. Their designs and devices were wicked. They did evil deliberately, contriving how to do mischief. There was no good among them. God saw man's wickedness as one injured and wronged by it. He saw it as a tender father sees the folly and stubbornness of a rebellious and disobedient child, which grieves him, and makes him wish he had been childless. The words here used are remarkable; they are used after the manner of men, and do not mean that God can change, or be unhappy. Does God thus hate our sin? And shall not we be grieved to the heart for it? Oh that we may look on Him whom we have grieved, and mourn! God repented that he had made man; but we never find him repent that he redeemed man. God resolves to destroy man: the original word is very striking, 'I will wipe off man from the earth,' as dirt or filth is wiped off from a place which should be clean, and is thrown to the dunghill, the proper place for it. God speaks of man as his own creature, when he resolves upon his punishment. Those forfeit their lives who do not answer the end of their living. God speaks of resolution concerning men, after his Spirit had been long striving with them in vain. None are punished by the justice of God, but those who hate to be reformed by the grace of God.

8-11 Noah did not find favour in the eyes of men; they hated and persecuted him, because both by his life and preaching he condemned the world: but he found grace in the eyes of the Lord, and this made him more truly honourable than the men of renown. Let this be our chief desire, let us labour that we may be accepted of him. When the rest of the world was wicked, Noah kept his integrity. God's good-will towards Noah produced this good work in him. He was a just man, that is, justified before God, by faith in the promised Seed. As such he was made holy, and had right principles; and was righteous in his conversation. He was not only honest, but devout; it was his constant care to do the will of God. God looks down upon those with an eye of favour, who sincerely look up to him with an eye of faith. It is easy to be religious when religion is in fashion; but it shows strong faith and resolution, to swim against the stream, and to appear for God when no one else appears for him; Noah did so. All kinds of sin were found among men. They corrupted God's worship. Sin fills the earth with violence, and this fully justified God's resolution to destroy the world. The contagion spread. When wickedness is become general, ruin is not far off; while there is a remnant of praying people in a nation, to empty the measure as it fills, judgments may be long kept off; but when all hands are at work to pull down the fences, by sin, and none stand in the gap to make up the breach, what can be expected but a flood of wrath?

12-21 God told Noah his purpose to destroy the wicked world by water. The secret of the Lord is with them that fear him, #Ps 25:14|. It is with all believers, enabling them to understand and apply the declarations and warnings of the written word. God chose to do it by a flood of waters, which should drown the world. As he chooses the rod with which he corrects his children, so he chooses the sword with which he cuts off his enemies. God established his covenant with Noah. This is the first place in the Bible where the word 'covenant' is found; it seems to mean, 1. The covenant of providence; that the course of nature shall be continued to the end of time. 2. The covenant of grace; that God would be a God to Noah, and that out of his seed God would take to himself a people. God directed Noah to make an ark. This ark was like the hulk of a ship, fitted to float upon the waters. It was very large, half the size of St. Paul's cathedral, and would hold more than eighteen of the largest ships now used. God could have secured Noah without putting him to any care, or pains, or trouble; but employed him in making that which was to be the means to preserve him, for the trial of his faith and obedience. Both the providence of God, and the grace of God, own and crown the obedient and diligent. God gave Noah particular orders how to make the ark, which could not therefore but be well fitted for the purpose. God promised Noah that he and his family should be kept alive in the ark. What we do in obedience to God, we and our families are likely to have the benefit of. The piety of parents gets their children good in this life, and furthers them in the way to eternal life, if they improve it.

22 Noah's faith triumphed over all corrupt reasonings. To rear so large a building, such a one as he never saw, and to provide food for the living creatures, would require from him a great deal of care, and labour, and expense. His neighbours would laugh at him. But all such objections, Noah, by faith, got over; his obedience was ready and resolute. Having begun to build, he did not leave off till he had finished: so did he, and so must we do. He feared the deluge, and therefore prepared the ark. And in the warning given to Noah, there is a more solemn warning given to us, to flee from the wrath to come, which will sweep the world of unbelievers into the pit of destruction. Christ, the true Noah, which same shall comfort us, hath by his sufferings already prepared the ark, and kindly invites us by faith to enter in. While the day of his patience continues, let us hear and obey his voice. 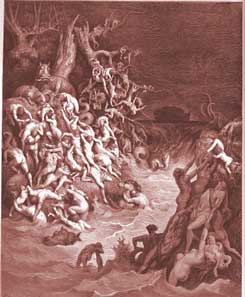 The World Is Destroyed by Water