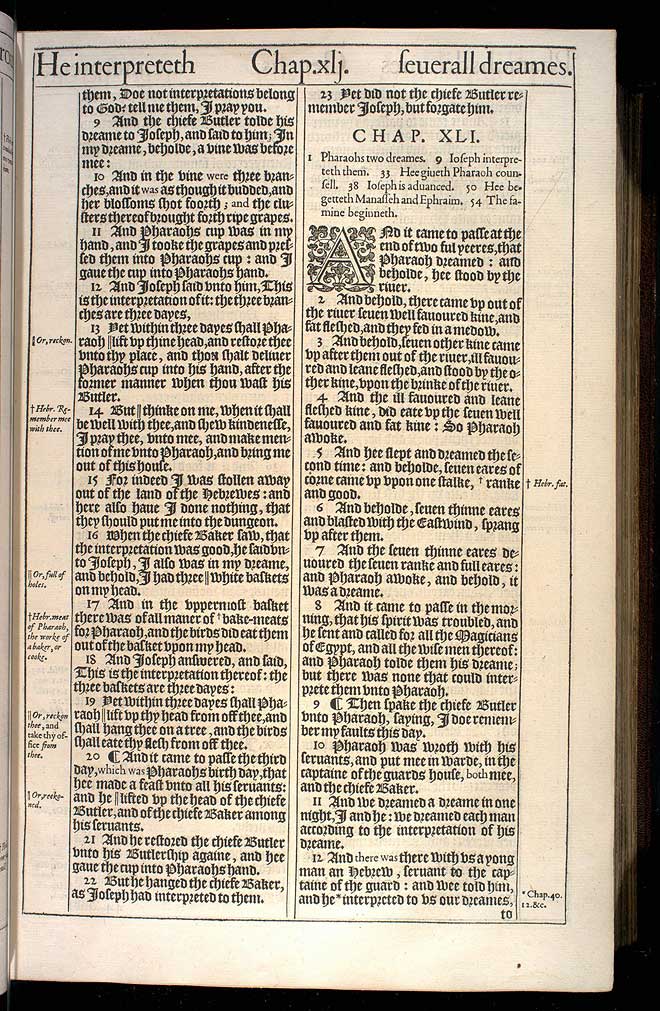 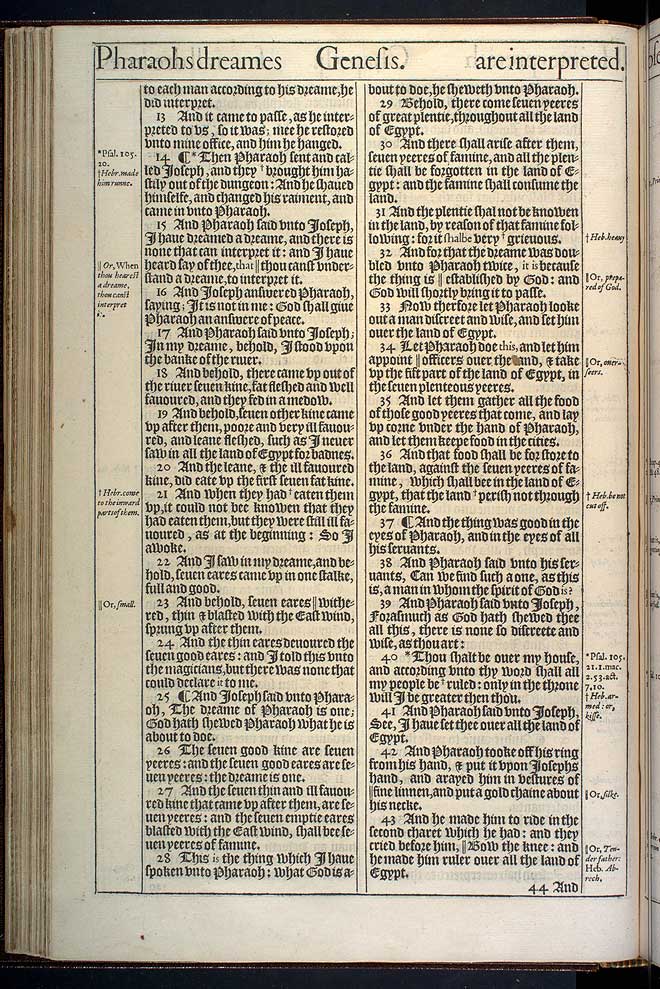 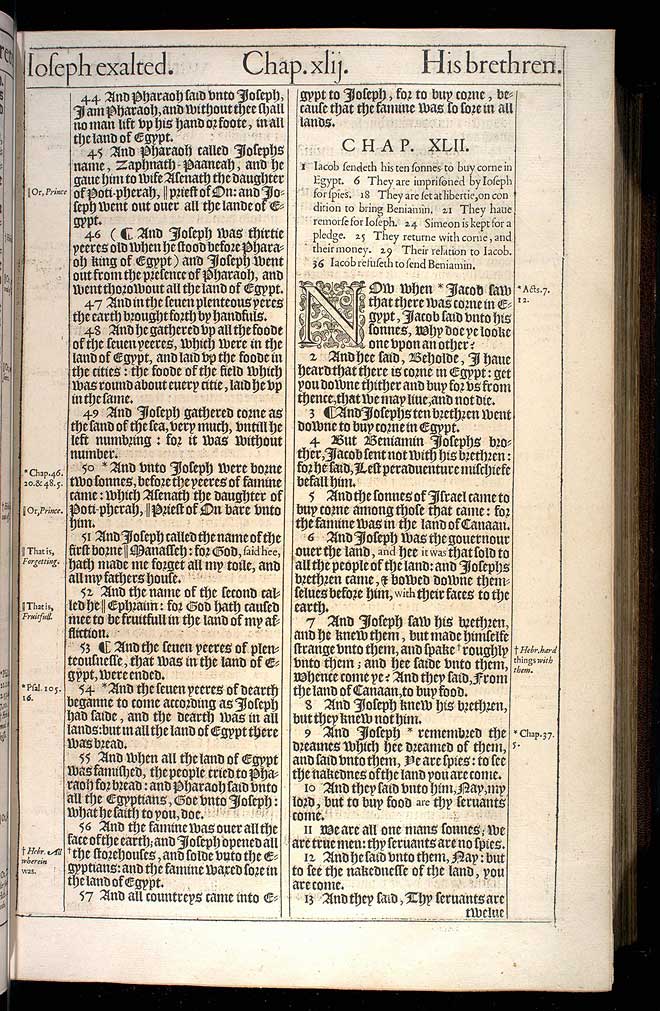 View this Genesis chapter 41 scan at a larger size

1 And it came to passe at the end of two ful yeeres, that Pharaoh dreamed: and beholde, hee stood by the riuer.

2 And behold, there came vp out of the riuer seuen well fauoured kine, and fat fleshed, and they fed in a medow.

3 And behold, seuen other kine came vp after them out of the riuer, ill fauoured and leane fleshed, and stood by the other kine, vpon the brinke of the riuer.

5 And hee slept and dreamed the second time: and beholde, seuen eares of corne came vp vpon one stalke, ranke and good.5

6 And beholde, seuen thinne eares and blasted with the Eastwind, sprang vp after them.

7 And the seuen thinne eares deuoured the seuen ranke and full eares: and Pharaoh awoke, and behold, it was a dreame.

8 And it came to passe in the morning, that his spirit was troubled, and he sent and called for all the Magicians of Egypt, and all the wise men thereof: and Pharaoh tolde them his dreame; but there was none that could interprete them vnto Pharaoh.

9 ¶ Then spake the chiefe Butler vnto Pharaoh, saying, I doe remember my faults this day.

10 Pharaoh was wroth with his seruants, and put mee in warde, in the captaine of the guards house, both mee, and the chiefe Baker.

11 And we dreamed a dreame in one night, I and he: we dreamed each man according to the interpretation of his dreame.

12 And there was there with vs a yong man an Hebrew, seruant to the captaine of the guard: and wee told him, and he interpreted to vs our dreames, to each man according to his dreame, he did interpret.12

13 And it came to passe, as he interpreted to vs, so it was; mee he restored vnto mine office, and him he hanged.

14 ¶ Then Pharaoh sent and called Ioseph, and they brought him hastily out of the dungeon: And he shaued himselfe, and changed his raiment, and came in vnto Pharaoh.14

15 And Pharaoh said vnto Ioseph, I haue dreamed a dreame, and there is none that can interpret it: and I haue heard say of thee, that thou canst vnderstand a dreame, to interpret it.15

16 And Ioseph answered Pharaoh, saying; It is not in me: God shall giue Pharaoh an answere of peace.

17 And Pharaoh said vnto Ioseph; In my dreame, behold, I stood vpon the banke of the riuer.

18 And behold, there came vp out of the riuer seuen kine, fat fleshed and well fauoured, and they fed in a medow.

19 And behold, seuen other kine came vp after them, poore and very ill fauoured, and leane fleshed, such as I neuer saw in all the land of Egypt for badnes.

20 And the leane, & the ill fauoured kine, did eate vp the first seuen fat kine.

22 And I saw in my dreame, and behold, seuen eares came vp in one stalke, full and good.

23 And behold, seuen eares withered, thin & blasted with the East wind, sprung vp after them.23

24 And the thin eares deuoured the seuen good eares: and I told this vnto the magicians, but there was none that could declare it to me.

25 ¶ And Ioseph said vnto Pharaoh, the dreame of Pharaoh is one; God hath shewed Pharaoh what he is about to doe.

28 This is the thing which I haue spoken vnto Pharaoh: what God is about to doe, he sheweth vnto Pharaoh.

29 Behold, there come seuen yeeres of great plentie, throughout all the land of Egypt.

30 And there shall arise after them, seuen yeeres of famine, and all the plentie shall be forgotten in the land of Egypt: and the famine shall consume the land.

31 And the plentie shal not be knowen in the land, by reason of that famine following: for it shalbe very grieuous.31

32 And for that the dreame was doubled vnto Pharaoh twice, it is because the thing is established by God: and God will shortly bring it to passe.32

33 Now therfore let Pharaoh looke out a man discreet and wise, and set him ouer the land of Egypt.

34 Let Pharaoh doe this, and let him appoint officers ouer the land, & take vp the fift part of the land of Egypt, in the seuen plenteous yeeres.34

35 And let them gather all the food of those good yeeres that come, and lay vp corne vnder the hand of Pharaoh, and let them keepe food in the cities.

36 And that food shall be for store to the land, against the seuen yeeres of famine, which shall bee in the land of Egypt, that the land perish not through the famine.36

38 And Pharaoh said vnto his seruants, Can we find such a one, as this is, a man in whom the spirit of God is?

39 And Pharaoh said vnto Ioseph, Forasmuch as God hath shewed thee all this, there is none so discreete and wise, as thou art:

40 Thou shalt be ouer my house, and according vnto thy word shall all my people be ruled: only in the throne will I be greater then thou.40

41 And Pharaoh said vnto Ioseph, See, I haue set thee ouer all the land of Egypt.

42 And Pharaoh tooke off his ring from his hand, & put it vpon Iosephs hand, and arayed him in vestures of fine linnen, and put a gold chaine about his necke.42

43 And he made him to ride in the second charet which he had: and they cried before him, Bow the knee: and he made him ruler ouer all the land of Egypt.43

44 And Pharaoh said vnto Ioseph, I am Pharaoh, and without thee shall no man lift vp his hand or foote, in all the land of Egypt.

45 And Pharaoh called Iosephs name, Zaphnath-Paaneah, and he gaue him to wife Asenath the daughter of Poti-pherah, priest of On: and Ioseph went out ouer all the lande of Egypt.45

46 (¶ And Ioseph was thirtie yeeres old when he stood before Pharaoh king of Egypt) and Ioseph went out from the presence of Pharaoh, and went thorowout all the land of Egypt.

47 And in the seuen plenteous yeres the earth brought forth by handfuls.

49 And Ioseph gathered corne as the sand of the sea, very much, vntill he left numbring: for it was without number.

50 And vnto Ioseph were borne two sonnes, before the yeeres of famine came: which Asenath the daughter of Poti-pherah, Priest of On bare vnto him.50

51 And Ioseph called the name of the first borne Manasseh: for God, said hee, hath made me forget all my toile, and all my fathers house.51

52 And the name of the second called he Ephraim: for God hath caused mee to be fruitfull in the land of my affliction.52

53 ¶ And the seuen yeeres of plenteousnesse, that was in the land of Egypt, were ended.

54 And the seuen yeeres of dearth beganne to come according as Ioseph had saide, and the dearth was in all lands: but in all the land of Egypt there was bread.54

55 And when all the land of Egypt was famished, the people cried to Pharaoh for bread: and Pharaoh said vnto all the Egyptians, Goe vnto Ioseph: what he saith to you, doe.

56 And the famine was ouer all the face of the earth; and Ioseph opened all the storehouses, and solde vnto the Egyptians: and the famine waxed sore in the land of Egypt.56

57 And all countreys came into Egypt to Ioseph, for to buy corne, because that the famine was so sore in all lands.