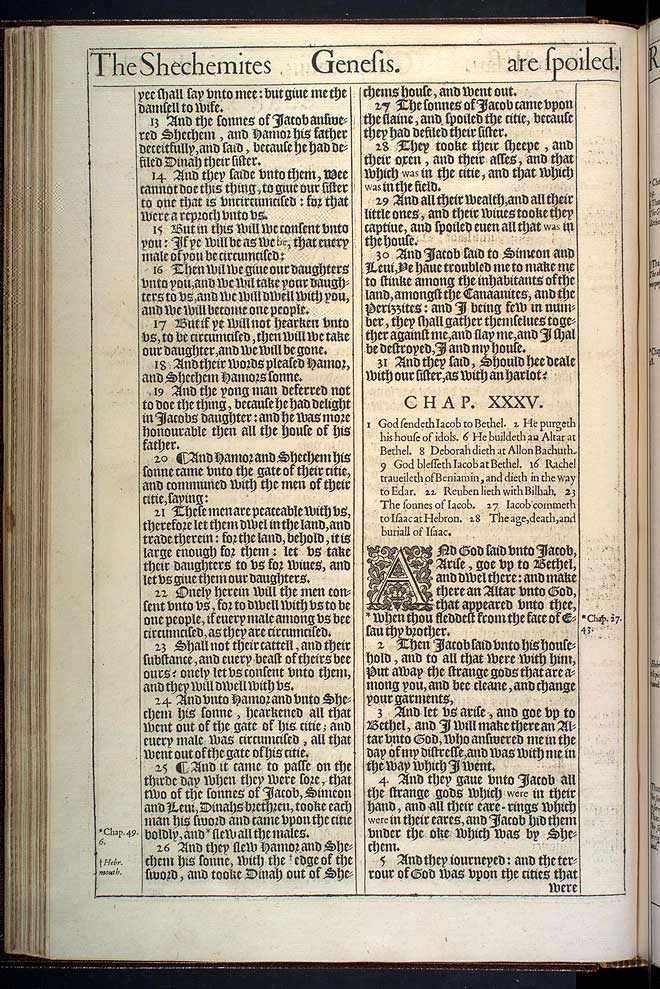 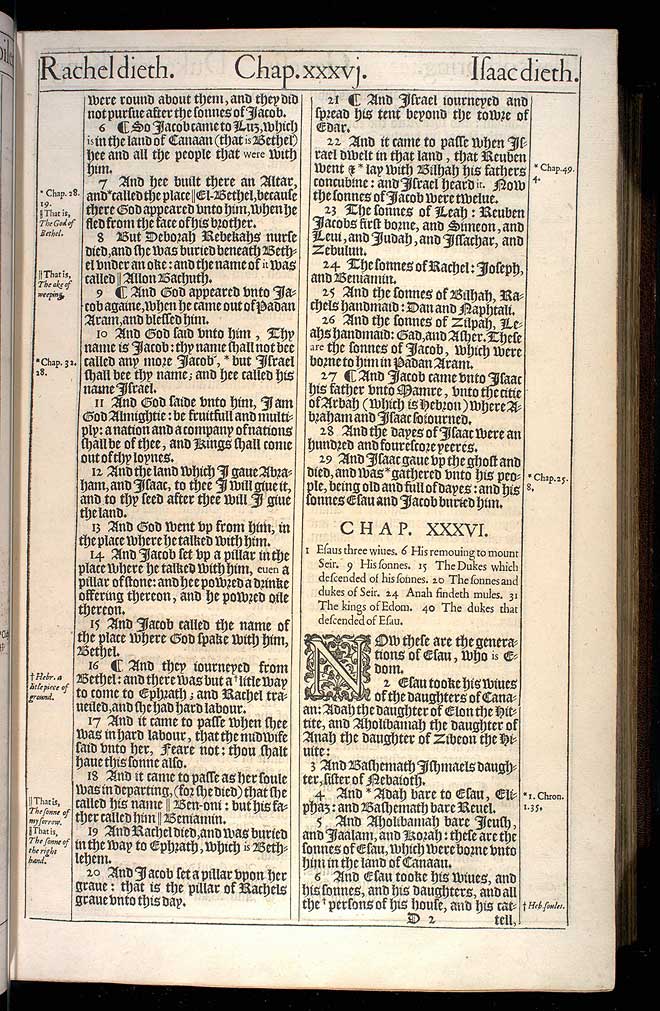 View this Genesis chapter 35 scan at a larger size

1 God sendeth Iacob to Bethel. 2 He purgeth his house of idols. 6 He buildeth an Altar at Bethel. 8 Deborah dieth at Allon Bachuth. 9 God blesseth Iacob at Bethel. 16 Rachel traueileth of Beniamin, and dieth in the way to Edar. 22 Reuben lieth with Bilhah. 23 The sonnes of Iacob. 27 Iacob commeth to Isaac at Hebron. 28 The age, death, and buriall of Isaac.

1 And God said vnto Iacob, Arise, goe vp to Bethel, and dwel there: and make there an Altar vnto God, that appeared vnto thee, when thou fleddest from the face of Esau thy brother.1

2 Then Iacob said vnto his household, and to all that were with him, Put away the strange gods that are among you, and bee cleane, and change your garments,

3 And let vs arise, and goe vp to Bethel, and I will make there an Altar vnto God, who answered me in the day of my distresse, and was with me in the way which I went.

5 And they iourneyed: and the terrour of God was vpon the cities that were round about them, and they did not pursue after the sonnes of Iacob.

6 ¶ So Iacob came to Luz, which is in the land of Canaan (that is Bethel) hee and all the people that were with him.

7 And hee built there an Altar, and called the place El-Bethel, because there God appeared vnto him, when he fled from the face of his brother.7

8 But Deborah Rebekahs nurse died, and she was buried beneath Bethel vnder an oke: and the name of it was called Allon Bachuth.8

9 ¶ And God appeared vnto Iacob againe, when he came out of Padan Aram, and blessed him.

10 And God said vnto him, Thy name is Iacob: thy name shall not bee called any more Iacob, but Israel shall bee thy name; and hee called his name Israel.10

11 And God saide vnto him, I am God Almightie: be fruitfull and multiply: a nation and a company of nations shall be of thee, and Kings shall come out of thy loynes.

12 And the land which I gaue Abraham, and Isaac, to thee I will giue it, and to thy seed after thee will I giue the land.

13 And God went vp from him, in the place where he talked with him.

14 And Iacob set vp a pillar in the place where he talked with him, euen a pillar of stone: and hee powred a drinke offering thereon, and he powred oile thereon.

15 And Iacob called the name of the place where God spake with him, Bethel.

16 ¶ And they iourneyed from Bethel: and there was but a litle way to come to Ephrath; and Rachel traueiled, and she had hard labour.16

17 And it came to passe when shee was in hard labour, that the midwife said vnto her, Feare not: thou shalt haue this sonne also.

18 And it came to passe as her soule was in departing, (for she died) that she called his name Ben-oni: but his father called him Beniamin.18

19 And Rachel died, and was buried in the way to Ephrath, which is Bethlehem.

20 And Iacob set a pillar vpon her graue: that is the pillar of Rachels graue vnto this day.

21 ¶ And Israel iourneyed and spread his tent beyond the towre of Edar.

22 And it came to passe when Israel dwelt in that land, that Reuben went & lay with Bilhah his fathers concubine: and Israel heard it. Now the sonnes of Iacob were twelue.22

23 The sonnes of Leah: Reuben Iacobs first borne, and Simeon, and Leui, and Iudah, and Issachar, and Zebulun.

24 The sonnes of Rachel: Ioseph, and Beniamin.

25 And the sonnes of Bilhah, Rachels handmaid: Dan and Naphtali.

26 And the sonnes of Zilpah, Leahs handmaid: Gad, and Asher. These are the sonnes of Iacob, which were borne to him in Padan Aram.

27 ¶ And Iacob came vnto Isaac his father vnto Mamre, vnto the citie of Arbah (which is Hebron) where Abraham and Isaac soiourned.

28 And the dayes of Isaac were an hundred and fourescore yeeres.

29 And Isaac gaue vp the ghost and died, and was gathered vnto his people, being old and full of dayes: and his sonnes Esau and Iacob buried him.29