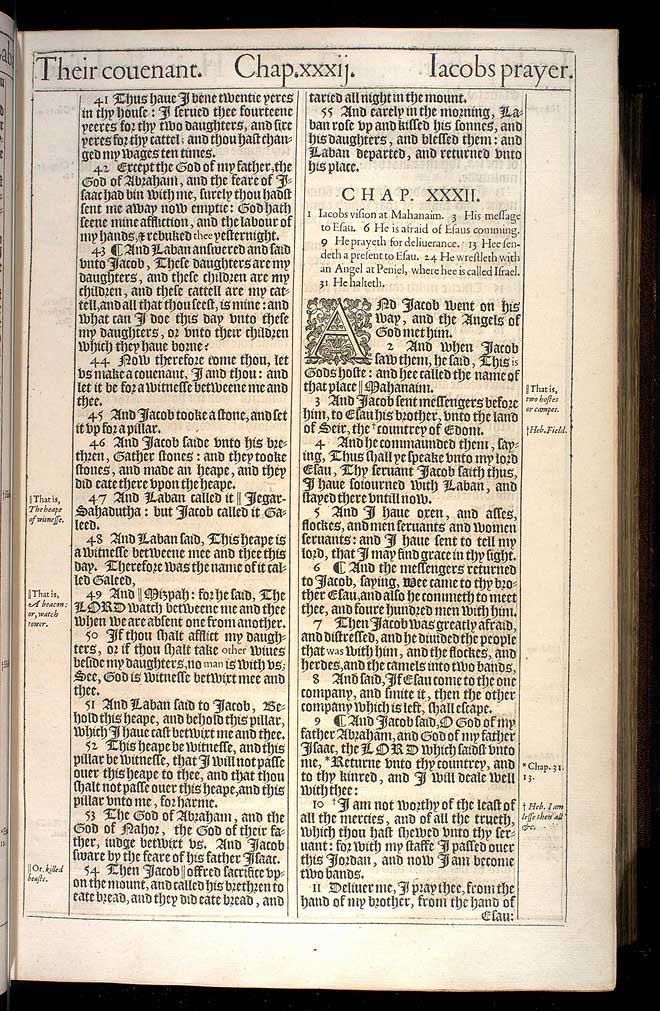 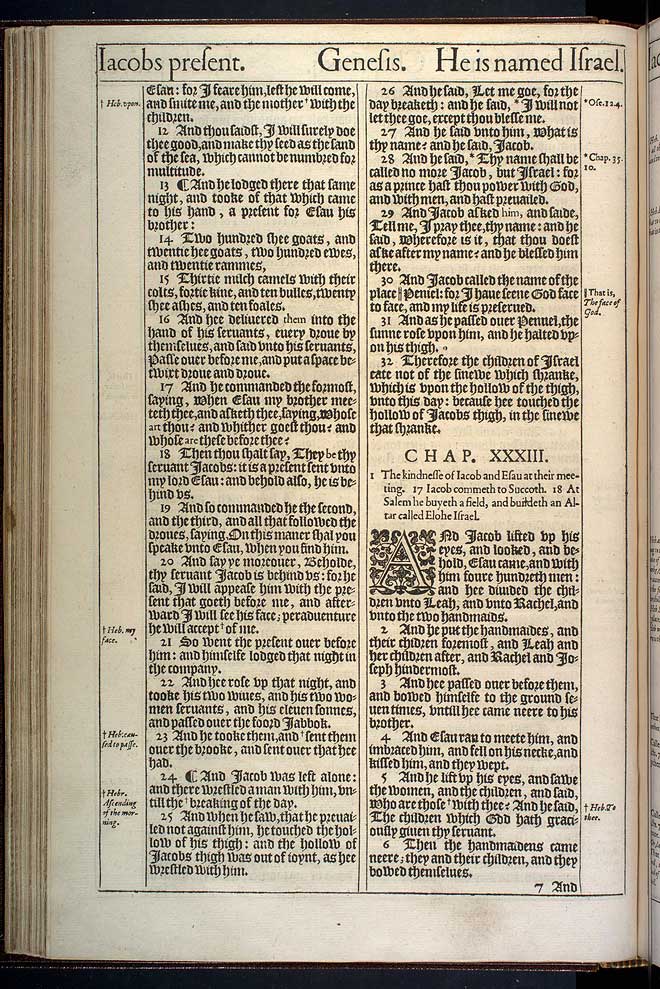 View this Genesis chapter 32 scan at a larger size

1 Iacobs vision at Mahanaim. 3 His message to Esau. 6 He is afraid of Esaus comming. 9 He prayeth for deliuerance. 13 Hee sendeth a present to Esau. 24 He wrestleth with an Angel at Peniel, where hee is called Israel. 31 He halteth.

1 And Iacob went on his way, and the Angels of God met him.

2 And when Iacob saw them, he said, This is Gods hoste: and hee called the name of that place Mahanaim.2

3 And Iacob sent messengers before him, to Esau his brother, vnto the land of Seir, the countrey of Edom.3

4 And he commaunded them, saying, Thus shall ye speake vnto my lord Esau, Thy seruant Iacob saith thus, I haue soiourned with Laban, and stayed there vntill now.

5 And I haue oxen, and asses, flockes, and men seruants and women seruants: and I haue sent to tell my lord, that I may find grace in thy sight.

6 ¶ And the messengers returned to Iacob, saying, Wee came to thy brother Esau, and also he commeth to meet thee, and foure hundred men with him.

7 Then Iacob was greatly afraid, and distressed, and he diuided the people that was with him, and the flockes, and herdes, and the camels into two bands,

8 And said, If Esau come to the one company, and smite it, then the other company which is left, shall escape.

10 I am not worthy of the least of all the mercies, and of all the trueth, which thou hast shewed vnto thy seruant: for with my staffe I passed ouer this Iordan, and now I am become two bands.10

12 And thou saidst, I will surely doe thee good, and make thy seed as the sand of the sea, which cannot be numbred for multitude.

13 ¶ And he lodged there that same night, and tooke of that which came to his hand, a present for Esau his brother:

16 And hee deliuered them into the hand of his seruants, euery droue by themselues, and said vnto his seruants, Passe ouer before me, and put a space betwixt droue and droue.

17 And he commanded the formost, saying, When Esau my brother meeteth thee, and asketh thee, saying, whose art thou? and whither goest thou? and whose are these before thee?

18 Then thou shalt say, They be thy seruant Iacobs: it is a present sent vnto my lord Esau: and behold also, he is behind vs.

19 And so commanded he the second, and the third, and all that followed the droues, saying, On this maner shal you speake vnto Esau, when you find him.

20 And say ye moreouer, Beholde, thy seruant Iacob is behind vs: for he said, I will appease him with the present that goeth before me, and afterward I will see his face; peraduenture he will accept of me.20

21 So went the present ouer before him: and himselfe lodged that night in the company.

22 And hee rose vp that night, and tooke his two wiues, and his two women seruants, and his eleuen sonnes, and passed ouer the foord Iabbok.

23 And he tooke them, and sent them ouer the brooke, and sent ouer that hee had.23

24 ¶ And Iacob was left alone: and there wrestled a man with him, vntill the breaking of the day.24

25 And when he saw, that he preuailed not against him, he touched the hollow of his thigh: and the hollow of Iacobs thigh was out of ioynt, as hee wrestled with him.

26 And he said, Let me goe, for the day breaketh: and he said, I will not let thee goe, except thou blesse me.26

28 And he said, Thy name shall be called no more Iacob, but Israel: for as a prince hast thou power with God, and with men, and hast preuailed.28

29 And Iacob asked him, and saide, Tell me, I pray thee, thy name: and he said, wherefore is it, that thou doest aske after my name? and he blessed him there.

30 And Iacob called the name of the place Peniel: for I haue seene God face to face, and my life is preserued.30

31 And as he passed ouer Penuel, the sunne rose vpon him, and he halted vpon his thigh.

32 Therefore the children of Israel eate not of the sinewe which shranke, which is vpon the hollow of the thigh, vnto this day: because hee touched the hollow of Iacobs thigh, in the sinewe that shranke.