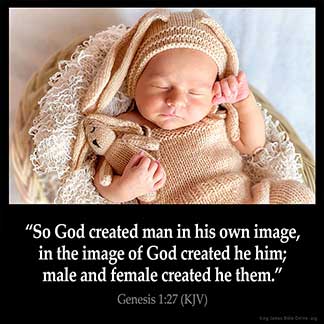 Other Translations for Genesis 1:27

God created man in His own image, in the image of God He created him; male and female He created them.
- New American Standard Version (1995)

And God made man in his image, in the image of God he made him: male and female he made them.
- Basic English Bible

God created man in his own image. In God's image he created him; male and female he created them.
- World English Bible

And God prepareth the man in His image; in the image of God He prepared him, a male and a female He prepared them.
- Youngs Literal Bible

1:26-28 We have here the second part of the sixth day's work, the creation of man, which we are in a special manner concerned to take notice of. Observe, That man was made last of all the creatures, which was both an honour and a favour to him: an honour, for the creation was to advance from that which was less perfect, to that which was more so and a favour, for it was not fit he should be lodged in the palace designed for him, till it was completely fitted and furnished for his reception. Man, as soon as he was made, had the whole visible creation before him, both to contemplate, and to take the comfort of. That man's creation was a mere signal act of divine wisdom and power, than that of the other creatures. The narrative of it is introduced with solemnity, and a manifest distinction from the rest. Hitherto it had been said, Let there be light, and Let there be a firmament: but now the word of command is turned into a word of consultation, Let us make man - For whose sake the rest of the creatures were made. Man was to be a creature different from all that had been hitherto made. Flesh and spirit, heaven and earth must be put together in him, and he must be allied to both worlds. And therefore God himself not only undertakes to make, but is pleased so to express himself, as if he called a council to consider of the making of him; Let us make man - The three persons of the Trinity, Father, Son, and Holy Ghost, consult about it, and concur in it; because man, when he was made, was to be dedicated and devoted to Father, Son, and Holy Ghost. That man was made in God's image, and after his likeness; two words to express the same thing. God's image upon man, consists, In his nature, not that of his body, for God has not a body, but that of his soul. The soul is a spirit, an intelligent, immortal spirit, an active spirit, herein resembling God, the Father of spirits, and the soul of the world. In his place and authority. Let us make man in our image, and let him have dominion. As he has the government of the inferior creatures, he is as it were God's representative on earth. Yet his government of himself by the freedom of his will, has in it more of God's image, than his government of the creatures. And chiefly in his purity and rectitude. God's image upon man consists in knowledge, righteousness, and true holiness, #Eph 4:24|; Col 3:10. He was upright, #Ec 7:29|. He had an habitual conformity of all his natural powers to the whole will of God. His understanding saw divine things clearly, and there were no errors in his knowledge: his will complied readily and universally with the will of God; without reluctancy: his affections were all regular, and he had no inordinate appetites or passions: his thoughts were easily fixed to the best subjects, and there was no vanity or ungovernableness in them. And all the inferior powers were subject to the dictates of the superior. Thus holy, thus happy, were our first parents, in having the image of God upon them. But how art thou fallen, O son of the morning? How is this image of God upon man defaced! How small are the remains of it, and how great the ruins of it! The Lord renew it upon our souls by his sanctifying grace! That man was made male and female, and blessed with fruitfulness. He created him male and female, Adam and Eve: Adam first out of earth, and Eve out of his side. God made but one male and one female, that all the nations of men might know themselves to be made of one blood, descendants, from one common stock, and might thereby be induced to love one another. God having made them capable of transmitting the nature they had received, said to them, Be fruitful, and multiply, and replenish the earth - Here he gave them, A large inheritance; replenish the earth, in which God has set man to be the servant of his providence, in the government of the inferior creatures, and as it were the intelligence of this orb; to be likewise the collector of his praises in this lower world, and lastly, to be a probationer for a better state. A numerous lasting family to enjoy this inheritance; pronouncing a blessing upon them, in the virtue of which, their posterity should extend to the utmost corners of the earth, and continue to the utmost period of time. That God gave to man a dominion over the inferior creatures, over fish of the sea, and over the fowl of the air - Though man provides for neither, he has power over both, much more over every living thing that moveth upon the earth - God designed hereby to put an honour upon man, that he might find himself the more strongly obliged to bring honour to his Maker.

1:29-30 We have here the third part of the sixth day's work, which was not any new creation, but a gracious provision of food for all flesh, #Psa 136:25|. - Here is, 1. Food provided for man, Ge 1:29. herbs and fruits must be his meat, including corn, and all the products of the earth. And before the earth was deluged, much more before it was cursed for man's sake, its fruits no doubt, were more pleasing to the taste, and more strengthening and nourishing to the body. 2. Food provided for the beasts, #Ge 1:30|. Doth God take care of oxen? Yes, certainly, he provides food convenient for them; and not for oxen only that were used in his sacrifices, and man's service, but even the young lions and the young ravens are the care of his providence, they ask and have their meat from God.