Viewing the 1611 King James Version of Galatians (Galatians) Chapter 1, also known as: THE EPISTLE OF Paul to the Galatians. , Galatians, Gal, Ga,. 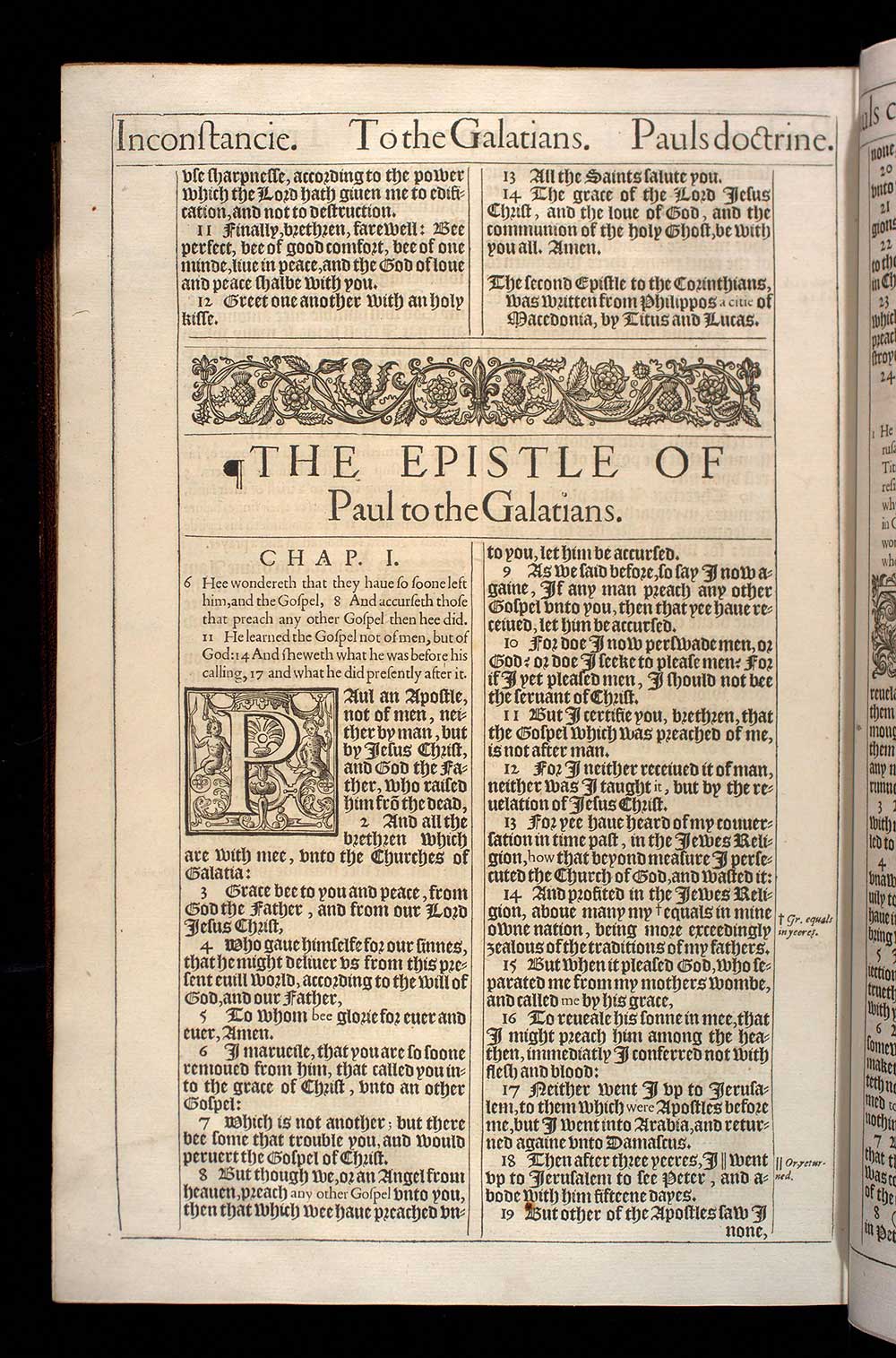 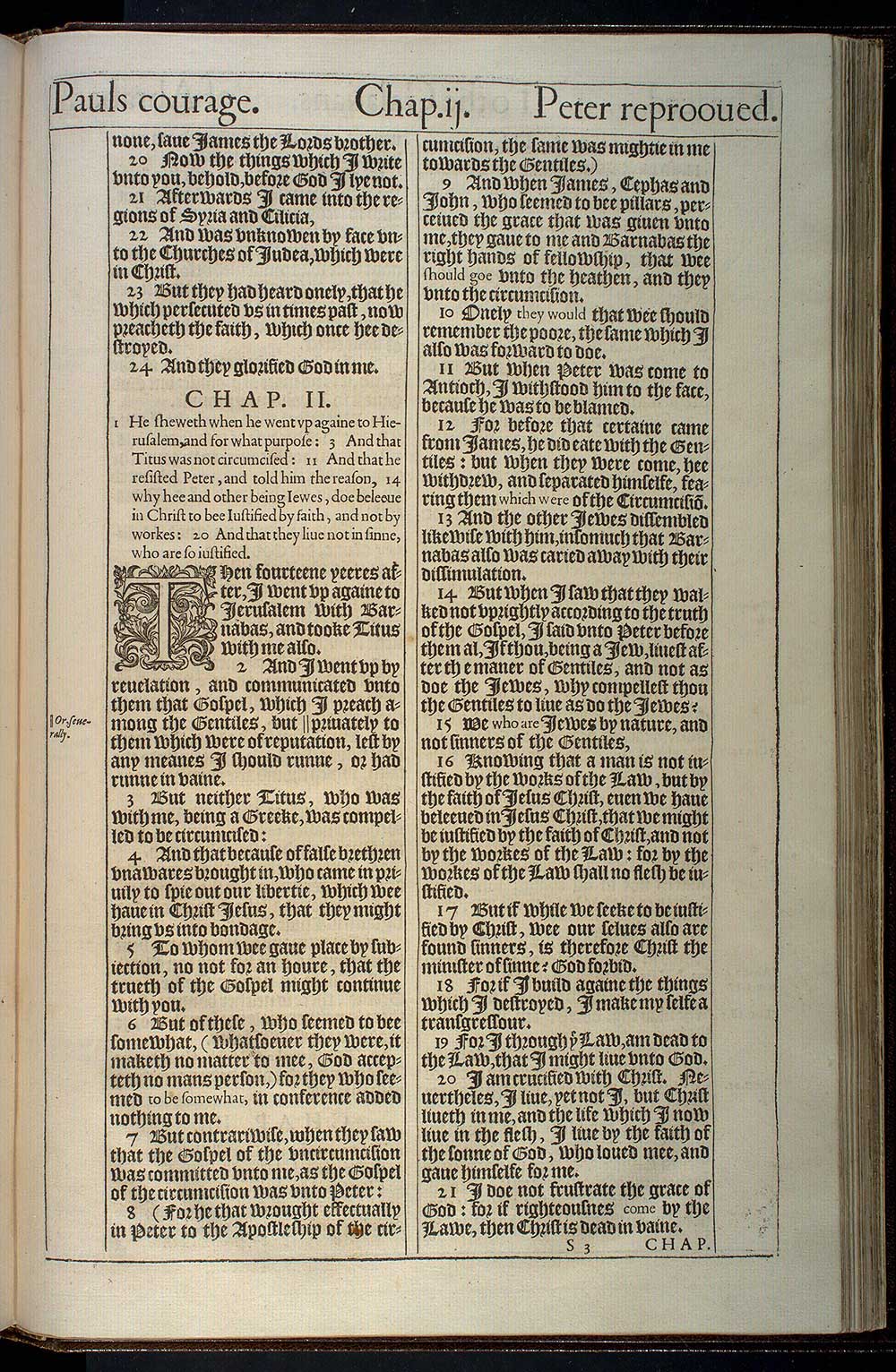 6 Hee wondereth that they haue so soone left him, and the Gospel, 8 And accurseth those that preach any other Gospel then hee did. 11 He learned the Gospel not of men, but of God: 14 And sheweth what he was before his calling, 17 and what he did presently after it.

1Paul an Apostle, not of men, neither by man, but by Iesus Christ, and God the Father, who raised him frō the dead,

2And all the brethren which are with mee, vnto the Churches of Galatia:

3Grace bee to you and peace, from God the Father, and from our Lord Iesus Christ,

4Who gaue himselfe for our sinnes, that he might deliuer vs from this present euill world, according to the will of God, and our Father,

5To whom bee glorie for euer and euer, Amen.

6I marueile, that you are so soone remoued from him, that called you into the grace of Christ, vnto an other Gospel:

7Which is not another; but there bee some that trouble you, and would peruert the Gospel of Christ.

8But though we, or an Angel from heauen, preach any other Gospel vnto you, then that which wee haue preached vnto you, let him be accursed.

9As we said before, so say I now againe, If any man preach any other Gospel vnto you, then that yee haue receiued, let him be accursed.

10For doe I now perswade men, or God? or doe I seeke to please men? For if I yet pleased men, I should not bee the seruant of Christ.

11But I certifie you, brethren, that the Gospel which was preached of me, is not after man.

12For I neither receiued it of man, neither was I taught it, but by the reuelation of Iesus Christ.

13For yee haue heard of my couuersation in time past, in the Iewes Religion, how that beyond measure I persecuted the Church of God, and wasted it:

14And profited in the Iewes Religion, aboue many my equals in mine owne nation, being more exceedingly zealous of the traditions of my fathers.14

15But when it pleased God, who separated me from my mothers wombe, and called me by his grace,

16To reueale his sonne in mee, that I might preach him among the heathen, immediatly I conferred not with flesh and blood:

17Neither went I vp to Ierusalem, to them which were Apostles before me, but I went into Arabia, and returned againe vnto Damascus.

18Then after three yeeres, I went vp to Ierusalem to see Peter, and abode with him fifteene dayes.18

19But other of the Apostles saw I none, saue Iames the Lords brother.

20Now the things which I write vnto you, behold, before God I lye not.

21Afterwards I came into the regions of Syria and Cilicia,

22And was vnknowen by face vnto the Churches of Iudea, which were in Christ.

23But they had heard onely, that he which persecuted vs in times past, now preacheth the faith, which once hee destroyed.

24And they glorified God in me.