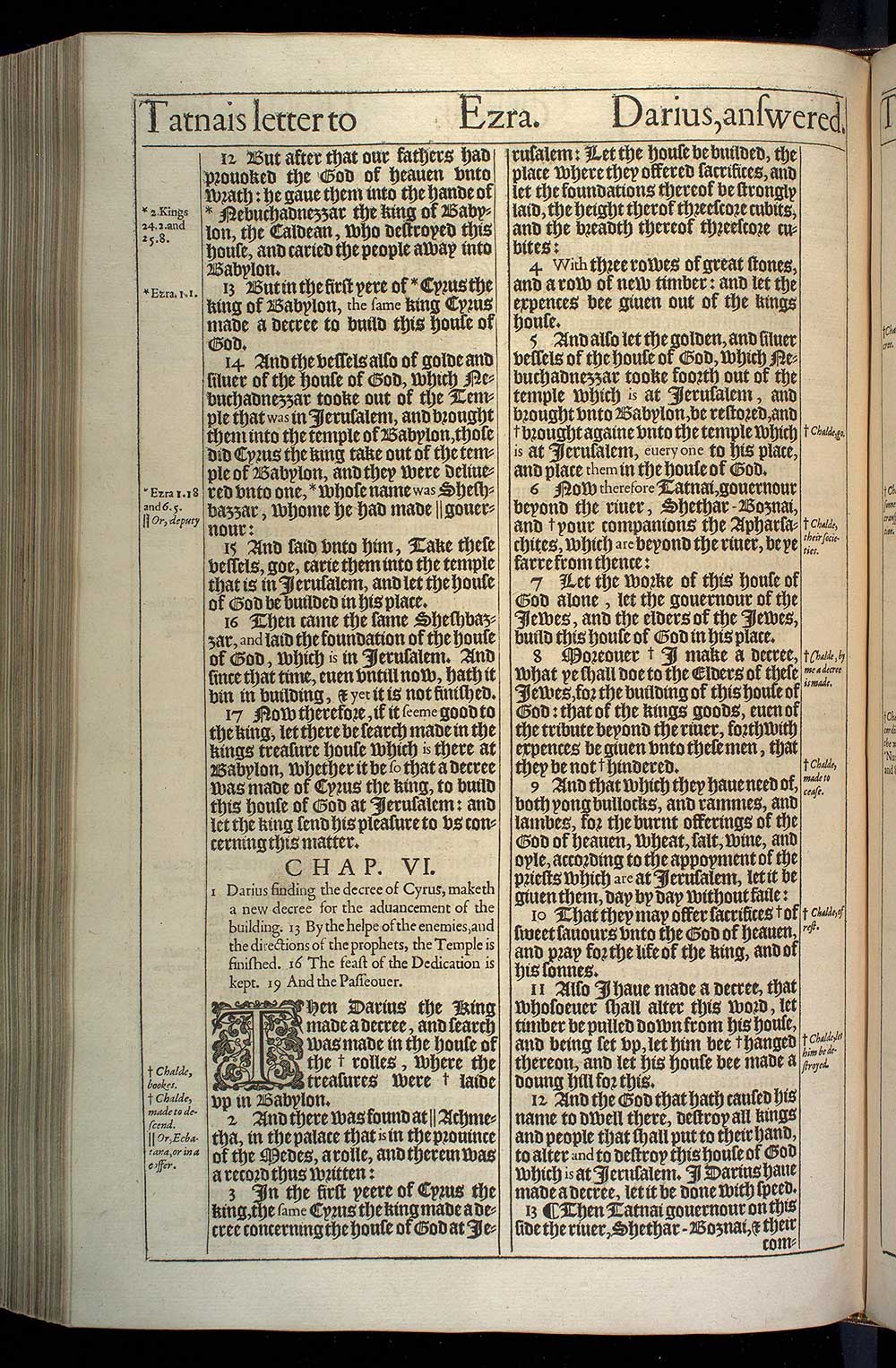 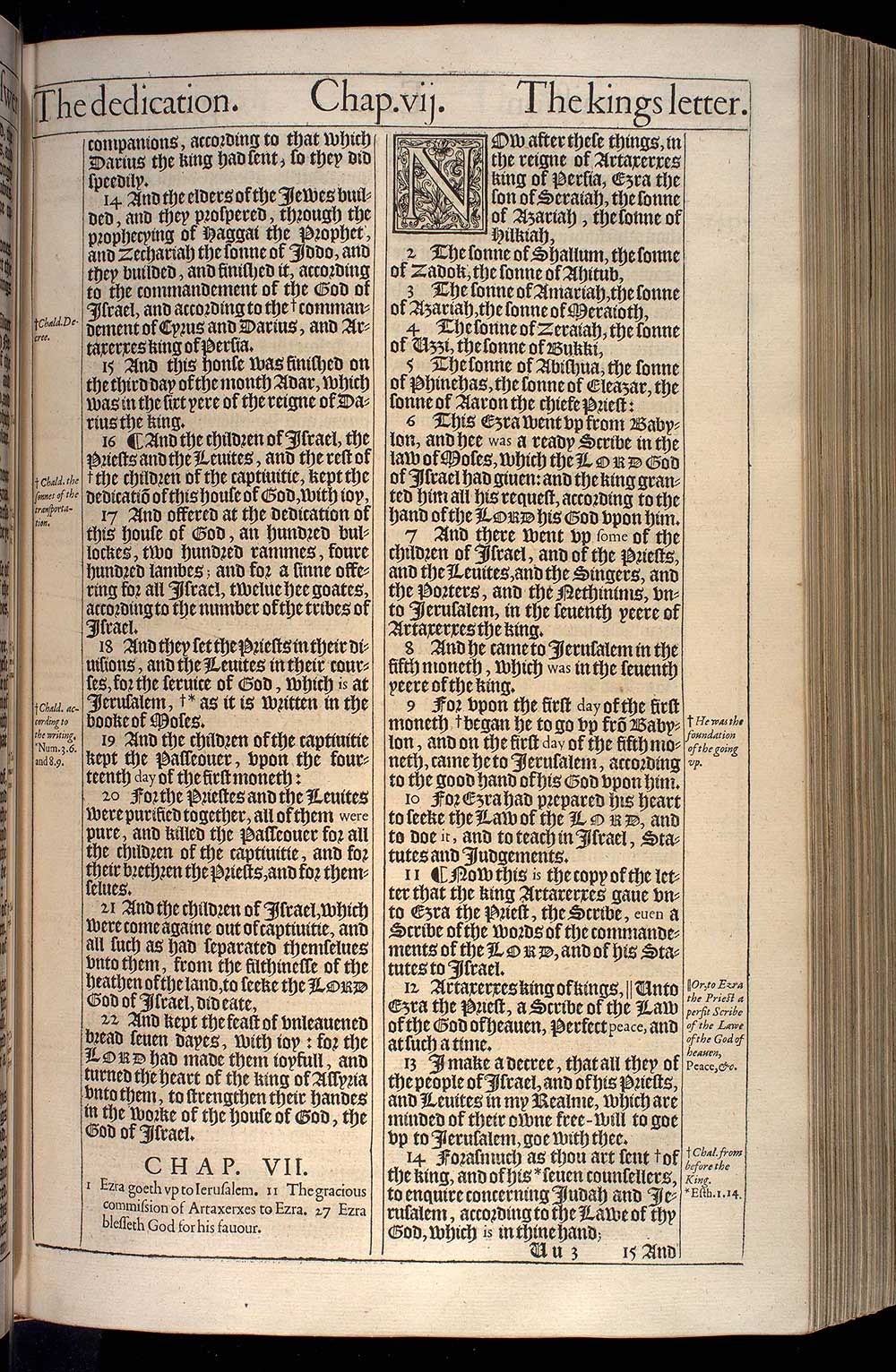 1 Darius finding the decree of Cyrus, maketh a new decree for the aduancement of the building. 13 By the helpe of the enemies, and the directions of the prophets, the Temple is finished. 16 The feast of the Dedication is kept. 19 And the Passeouer.

1Then Darius the King made a decree, and search was made in the house of the rolles, where the treasures were laide vp in Babylon.1

2And there was found at Achmetha, in the palace that is in the prouince of the Medes, a rolle, and therein was a record thus written:2

4With three rowes of great stones, and a row of new timber: and let the expences bee giuen out of the kings house.

8Moreouer I make a decree, what ye shall doe to the Elders of these Iewes, for the building of this house of God: that of the kings goods, euen of the tribute beyond the riuer, forthwith expences be giuen vnto these men, that they be not hindered.8

9And that which they haue need of, both yong bullocks, and rammes, and lambes, for the burnt offerings of the God of heauen, wheat, salt, wine, and oyle, according to the appoyment of the priests which are at Ierusalem, let it be giuen them, day by day without faile:

10That they may offer sacrifices of sweet sauours vnto the God of heauen, and pray for the life of the king, and of his sonnes.10

11Also I haue made a decree, that whosoeuer shall alter this word, let timber be pulled down from his house, and being set vp, let him bee hanged thereon, and let his house bee made a doung hill for this.11

12And the God that hath caused his name to dwell there, destroy all kings and people that shall put to their hand, to alter and to destroy this house of God which is at Ierusalem. I Darius haue made a decree, let it be done with speed.

13¶ Then Tatnai gouernour on this side the riuer, Shethar-Boznai, & their companions, according to that which Darius the king had sent, so they did speedily.

15And this honse was finished on the third day of the month Adar, which was in the sixt yere of the reigne of Darius the king.

17And offered at the dedication of this house of God, an hundred bullockes, two hundred rammes, foure hundred lambes; and for a sinne offering for all Israel, twelue hee goates, according to the number of the tribes of Israel.

18And they set the Priests in their diuisions, and the Leuites in their courses, for the seruice of God, which is at Ierusalem, as it is written in the booke of Moses.18

19And the children of the captiuitie kept the Passeouer, vpon the fourteenth day of the first moneth:

20For the Priestes and the Leuites were purified together, all of them were pure, and killed the Passeouer for all the children of the captiuitie, and for their brethren the Priests, and for themselues.

21And the children of Israel, which were come againe out of captiuitie, and all such as had separated themselues vnto them, from the filthinesse of the heathen of the land, to seeke the Lord God of Israel, did eate,

22And kept the feast of vnleauened bread seuen dayes, with ioy: for the Lord had made them ioyfull, and turned the heart of the king of Assyria vnto them, to strengthen their handes in the worke of the house of God, the God of Israel.