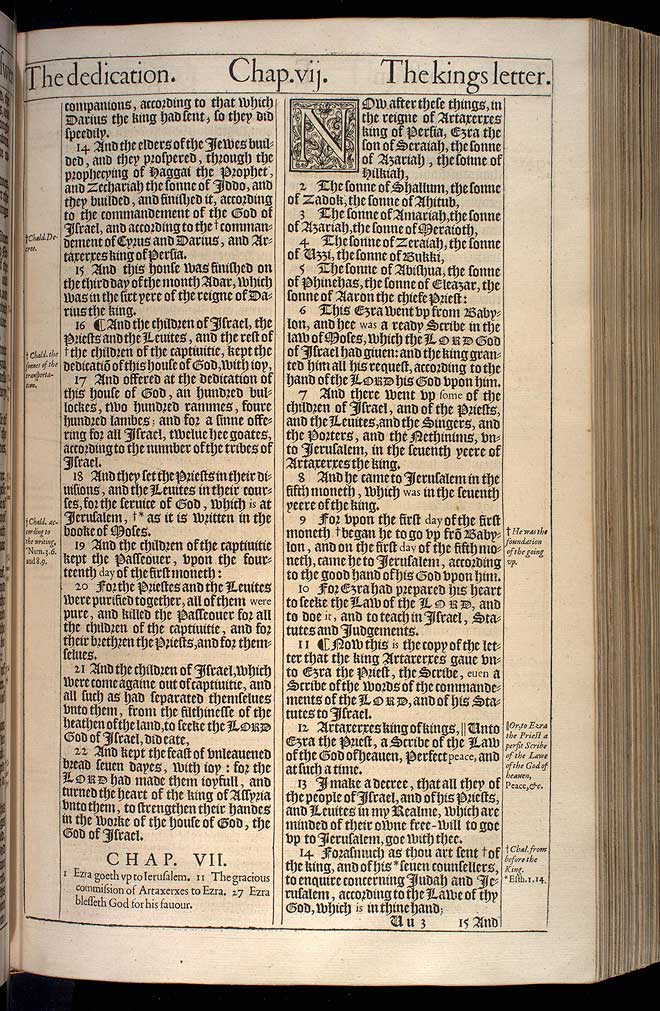 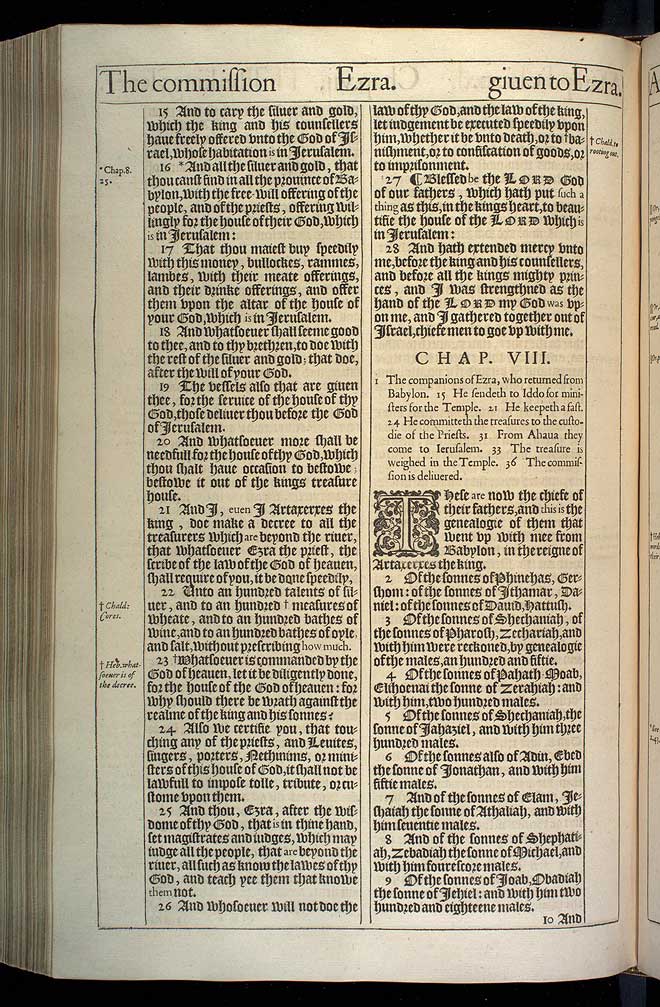 View this Ezrah chapter 7 scan at a larger size

1 Ezra goeth vp to Ierusalem. 11 The gracious commission of Artaxerxes to Ezra. 27 Ezra blesseth God for his fauour.

6 This Ezra went vp from Babylon, and hee was a ready Scribe in the law of Moses, which the Lord God of Israel had giuen: and the king granted him all his request, according to the hand of the Lord his God vpon him.

7 And there went vp some of the children of Israel, and of the Priests, and the Leuites, and the Singers, and the Porters, and the Nethinims, vnto Ierusalem, in the seuenth yeere of Artaxerxes the king.

8 And he came to Ierusalem in the fifth moneth, which was in the seuenth yeere of the king.

10 For Ezra had prepared his heart to seeke the Law of the Lord, and to doe it, and to teach in Israel, Statutes and Iudgements.

11 ¶ Now this is the copy of the letter that the king Artaxerxes gaue vnto Ezra the Priest, the Scribe, euen a Scribe of the words of the commandements of the Lord, and of his Statutes to Israel.

12 Artaxerxes king of kings, Unto Ezra the Priest, a Scribe of the Law of the God of heauen, Perfect peace, and at such a time.12

13 I make a decree, that all they of the people of Israel, and of his Priests, and Leuites in my Realme, which are minded of their owne free-will to goe vp to Ierusalem, goe with thee.

14 Forasmuch as thou art sent of the king, and of his seuen counsellers, to enquire concerning Iudah and Ierusalem, according to the Lawe of thy God, which is in thine hand;14

The commission giuen to Ezra

15 And to cary the siluer and gold, which the king and his counsellers haue freely offered vnto the God of Israel, whose habitation is in Ierusalem.

16 And all the siluer and gold, that thou canst find in all the prouince of Babylon, with the free-will offering of the people, and of the priests, offering willingly for the house of their God, which is in Ierusalem:16

17 That thou maiest buy speedily with this money, bullockes, rammes, lambes, with their meate offerings, and their drinke offerings, and offer them vpon the altar of the house of your God, which is in Ierusalem.

18 And whatsoeuer shall seeme good to thee, and to thy brethren, to doe with the rest of the siluer and gold; that doe, after the will of your God.

19 The vessels also that are giuen thee, for the seruice of the house of thy God, those deliuer thou before the God of Ierusalem.

20 And whatsoeuer more shall be needfull for the house of thy God, which thou shalt haue occasion to bestowe; bestowe it out of the kings treasure house.

21 And I, euen I Artaxerxes the king, doe make a decree to all the treasurers which are beyond the riuer, that whatsoeuer Ezra the priest, the scribe of the law of the God of heauen, shall require of you, it be done speedily,

23 Whatsoeuer is commanded by the God of heauen, let it be diligently done, for the house of the God of heauen: for why should there be wrath against the realme of the king and his sonnes?23

24 Also we certifie you, that touching any of the priests, and Leuites, singers, porters, Nethinims, or ministers of this house of God, it shall not be lawfull to impose tolle, tribute, or custome vpon them.

25 And thou, Ezra, after the wisdome of thy God, that is in thine hand, set magistrates and iudges, which may iudge all the people, that are beyond the riuer, all such as know the lawes of thy God, and teach yee them that knowe them not.

The commission giuen to Ezra

26 And whosoeuer will not doe the law of thy God, and the law of the king, let iudgement be executed speedily vpon him, whether it be vnto death, or to banishment, or to confiscation of goods, or to imprisonment.26

27 ¶ Blessed be the Lord God of our fathers, which hath put such a thing as this, in the kings heart, to beautifie the house of the Lord which is in Ierusalem:

28 And hath extended mercy vnto me, before the king and his counsellers, and before all the kings mighty princes, and I was strengthned as the hand of the Lord my God was vpon me, and I gathered together out of Israel, chiefe men to goe vp with me.