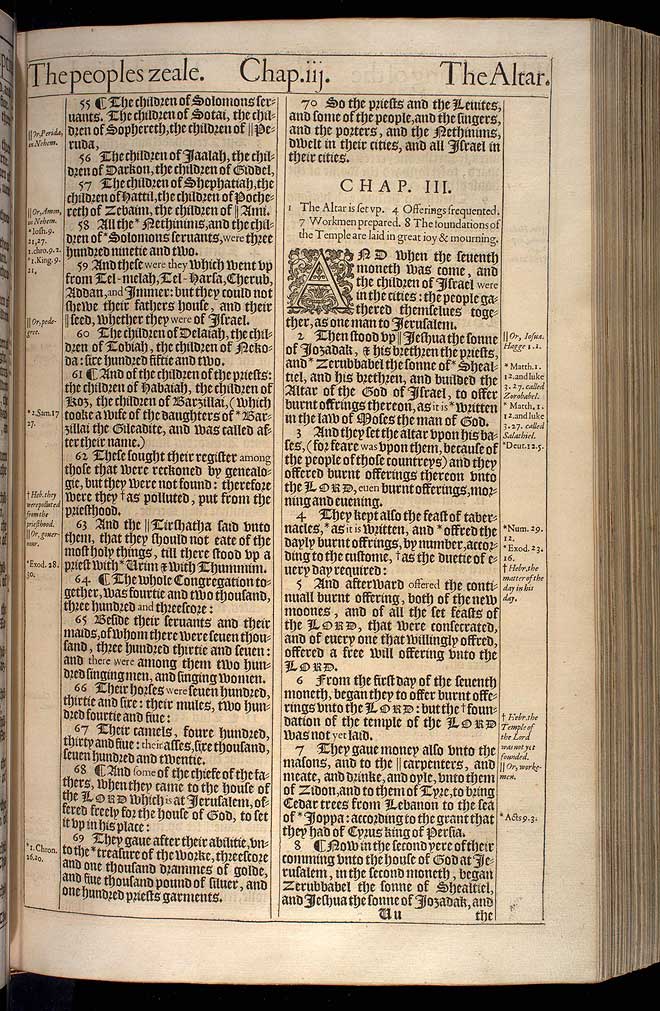 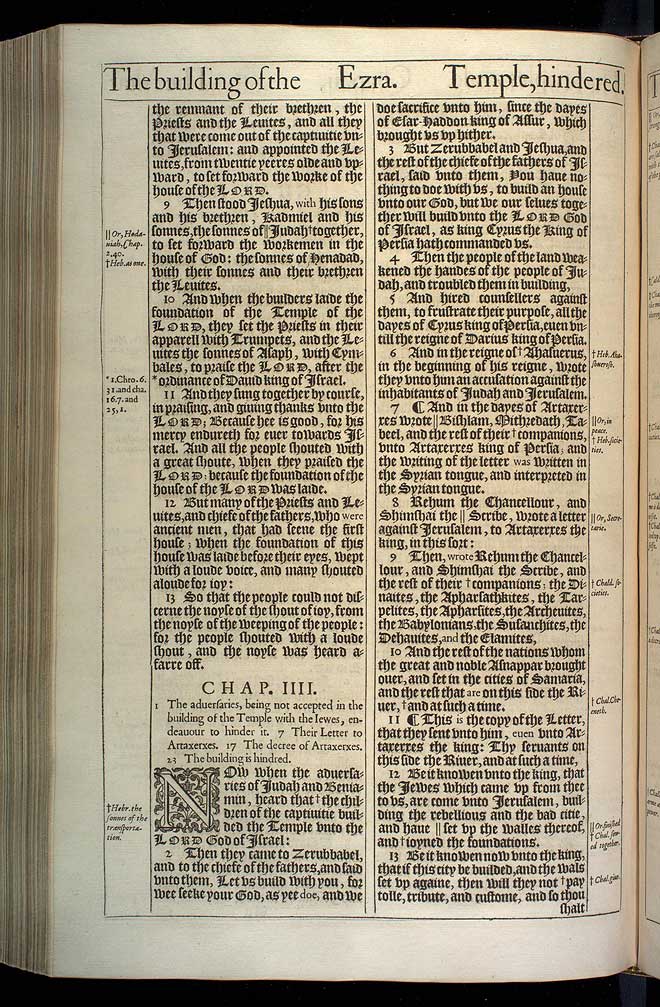 View this Ezrah chapter 3 scan at a larger size

1 The Altar is set vp. 4 Offerings frequented. 7 Workmen prepared. 8 The foundations of the Temple are laid in great ioy & mourning.

1 And when the seuenth moneth was come, and the children of Israel were in the cities: the people gathered themselues together, as one man to Ierusalem.

2 Then stood vp Ieshua the sonne of Iozadak, & his brethren the priests, and Zerubbabel the sonne of Shealtiel, and his brethren, and builded the Altar of the God of Israel, to offer burnt offrings thereon, as it is written in the law of Moses the man of God.2

3 And they set the altar vpon his bases, (for feare was vpon them, because of the people of those countreys) and they offered burnt offerings thereon vnto the Lord, euen burnt offerings, morning and euening.

4 They kept also the feast of tabernacles, as it is written, and offred the dayly burnt offrings, by number, according to the custome, as the duetie of euery day required:4

5 And afterward offered the continuall burnt offering, both of the new moones, and of all the set feasts of the Lord, that were consecrated, and of euery one that willingly offred, offered a free will offering vnto the Lord.

6 From the first day of the seuenth moneth, began they to offer burnt offerings vnto the Lord: but the foundation of the temple of the Lord was not yet laid.6

7 They gaue money also vnto the masons, and to the carpenters, and meate, and drinke, and oyle, vnto them of Zidon, and to them of Tyre, to bring Cedar trees from Lebanon to the sea of Ioppa: according to the grant that they had of Cyrus king of Persia.7

8 ¶ Now in the second yere of their coming vnto the house of God at Ierusalem, in the second moneth, began Zerubbabel the sonne of Shealtiel, and Ieshua the sonne of Iozadak, and the remnant of their brethren, the Priests and the Leuites, and all they that were come out of the captiuitie vnto Ierusalem: and appointed the Leuites, from twentie yeeres olde and vpward, to set forward the worke of the house of the Lord.

9 Then stood Ieshua, with his sons and his brethren, Kadmiel and his sonnes, the sonnes of Iudah together, to set forward the workemen in the house of God: the sonnes of Henadad, with their sonnes and their brethren the Leuites.9

10 And when the builders laide the foundation of the Temple of the Lord, they set the Priests in their apparell with Trumpets, and the Leuites the sonnes of Asaph, with Cymbales, to praise the Lord, after the ordinance of Dauid king of Israel.10

11 And they sung together by course, in praising, and giuing thanks vnto the Lord; Because hee is good, for his mercy endureth for euer towards Israel. And all the people shouted with a great shoute, when they praised the Lord; because the foundation of the house of the Lord was laide.

12 But many of the Priests and Leuites, and chiefe of the fathers, who were ancient men, that had seene the first house; when the foundation of this house was laide before their eyes, wept with a loude voice, and many shouted aloude for ioy: