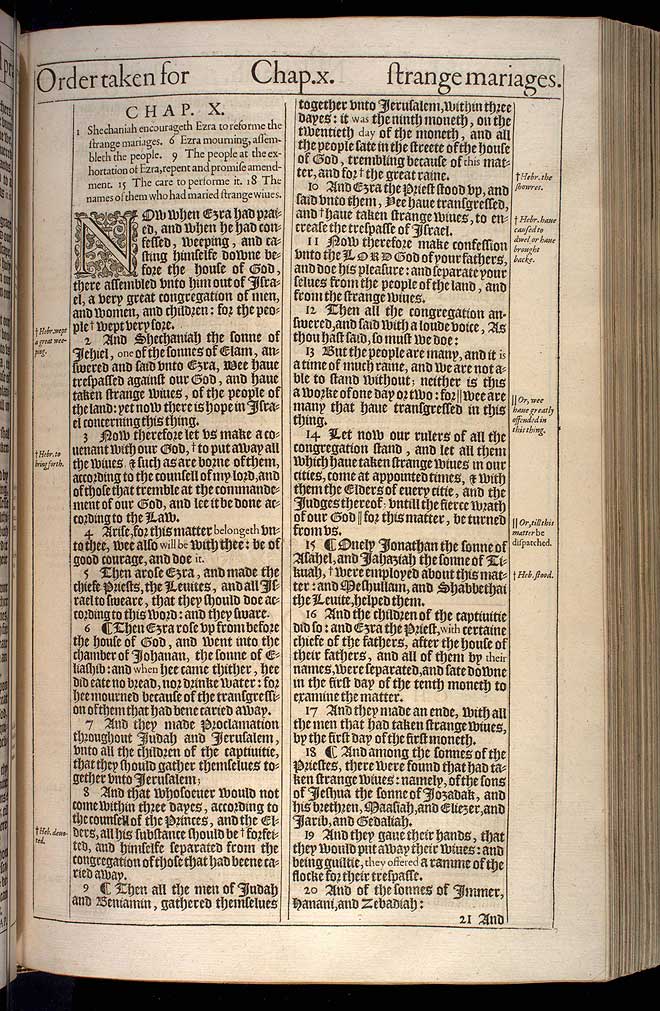 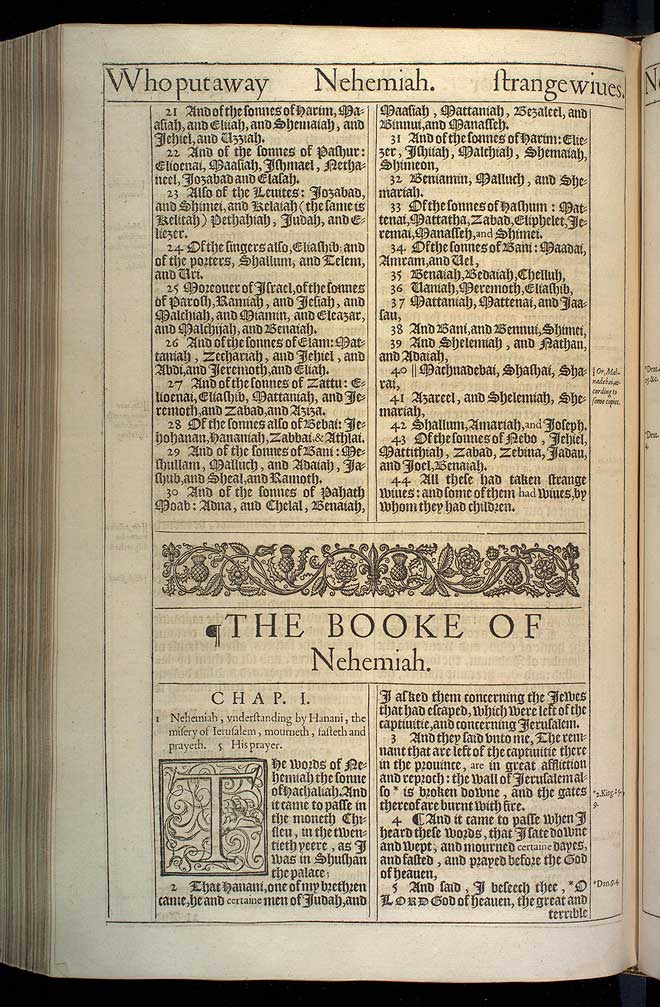 View this Ezrah chapter 10 scan at a larger size

1 Shechaniah encourageth Ezra to reforme the strange mariages. 6 Ezra mourning, assembleth the people. 9 The people at the exhortation of Ezra, repent and promise amendment. 15 The care to performe it. 18 The names of them who had maried strange wiues.

1 Now when Ezra had praised, and when he had confessed, weeping, and casting himselfe downe before the house of God, there assembled vnto him out of Israel, a very great congregation of men, and women, and children: for the people wept very sore.1

2 And Shechaniah the sonne of Iehiel, one of the sonnes of Elam, answered and said vnto Ezra, Wee haue trespassed against our God, and haue taken strange wiues, of the people of the land: yet now there is hope in Israel concerning this thing.

3 Now therefore let vs make a couenant with our God, to put away all the wiues, & such as are borne of them, according to the counsell of my lord, and of those that tremble at the commandement of our God, and lee it be done according to the Law.3

4 Arise, for this matter belongeth vnto thee, wee also will be with thee: be of good courage, and doe it.

5 Then arose Ezra, and made the chiefe Priests, the Leuites, and all Israel to sweare, that they should doe according to this word: and they sware.

6 ¶ Then Ezra rose vp from before the house of God, and went into the chamber of Iohanan, the sonne of Eliashib: and when hee came thither, hee did eate no bread, nor drinke water: for hee mourned because of the transgression of them that had bene caried away.

7 And they made Proclamation throughout Iudah and Ierusalem, vnto all the children of the captiuitie, that they should gather themselues together vnto Ierusalem;

8 And that whosoeuer would not come within three dayes, according to the counsell of the Princes, and the Elders, all his substance should be forfeited, and himselfe separated from the congregation of those that had beene caried away.8

9 ¶ Then all the men of Iudah and Beniamin, gathered themselues together vnto Ierusalem, within three dayes: it was the ninth moneth, on the twentieth day of the moneth, and all the people sate in the streete of the house of God, trembling because of this matter, and for the great raine.9

10 And Ezra the Priest stood vp, and said vnto them, Yee haue transgressed, and haue taken strange wiues, to encrease the trespasse of Israel.10

11 Now therefore make confession vnto the Lord God of your fathers, and doe his pleasure: and separate your selues from the people of the land, and from the strange wiues.

12 Then all the congregation answered, and said with a loude voice, As thou hast said, so must we doe:

13 But the people are many, and it is a time of much raine, and we are not able to stand without; neither is this a worke of one day or two: for wee are many that haue transgressed in this thing.13

14 Let now our rulers of all the congregation stand, and let all them which haue taken strange wiues in our cities, come at appointed times, & with them the Elders of euery citie, and the Iudges thereof; vntill the fierce wrath of our God for this matter, be turned from vs.14

15 ¶ Onely Ionathan the sonne of Asahel, and Iahaziah the sonne of Tikuah, were employed about this matter: and Meshullam, and Shabbethai the Leuite, helped them.15

16 And the children of the captiuitie did so: and Ezra the Priest, with certaine chiefe of the fathers, after the house of their fathers, and all of them by their names, were separated, and sate downe in the first day of the tenth moneth to examine the matter.

17 And they made an ende, with all the men that had taken strange wiues, by the first day of the first moneth.

18 ¶ And among the sonnes of the Priestes, there were found that had taken strange wiues: namely, of the sons of Ieshua the sonne of Iozadak, and his brethren, Maasiah, and Eliezer, and Iarib, and Gedaliah.

19 And they gaue their hands, that they would put away their wiues: and being guiltie, they offered a ramme of the flocke for their trespasse.

20 And of the sonnes of Immer, Hanani, and Zebadiah:

21 And of the sonnes of Harim, Maasiah, and Eliiah, and Shemaiah, and Iehiel, and Uzziah.

24 Of the singers also, Eliashib; and of the porters, Shallum, and Telem, and Uri.

26 And of the sonnes of Elam: Mattaniah, Zechariah, and Iehiel, and Abdi, and Ieremoth, and Eliah.

27 And of the sonnes of Zattu: Elioenai, Eliashib, Mattaniah, and Ieremoth, and Zabad, and Aziza.

29 And of the sonnes of Bani: Meshullam, Malluch, and Adaiah, Iashub, and Sheal, and Ramoth.

30 And of the sonnes of Pahath Moab: Adna, and Chelal, Benaiah, Maasiah, Mattaniah, Bezaleel, and Binnui, and Manasseh.

39 And Shelemiah, and Nathan, and Adaiah,

43 Of the sonnes of Nebo, Iehiel, Mattithiah, Zabad, Zebina, Iadau, and Ioel, Benaiah.

44 All these had taken strange wiues: and some of them had wiues, by whom they had children.