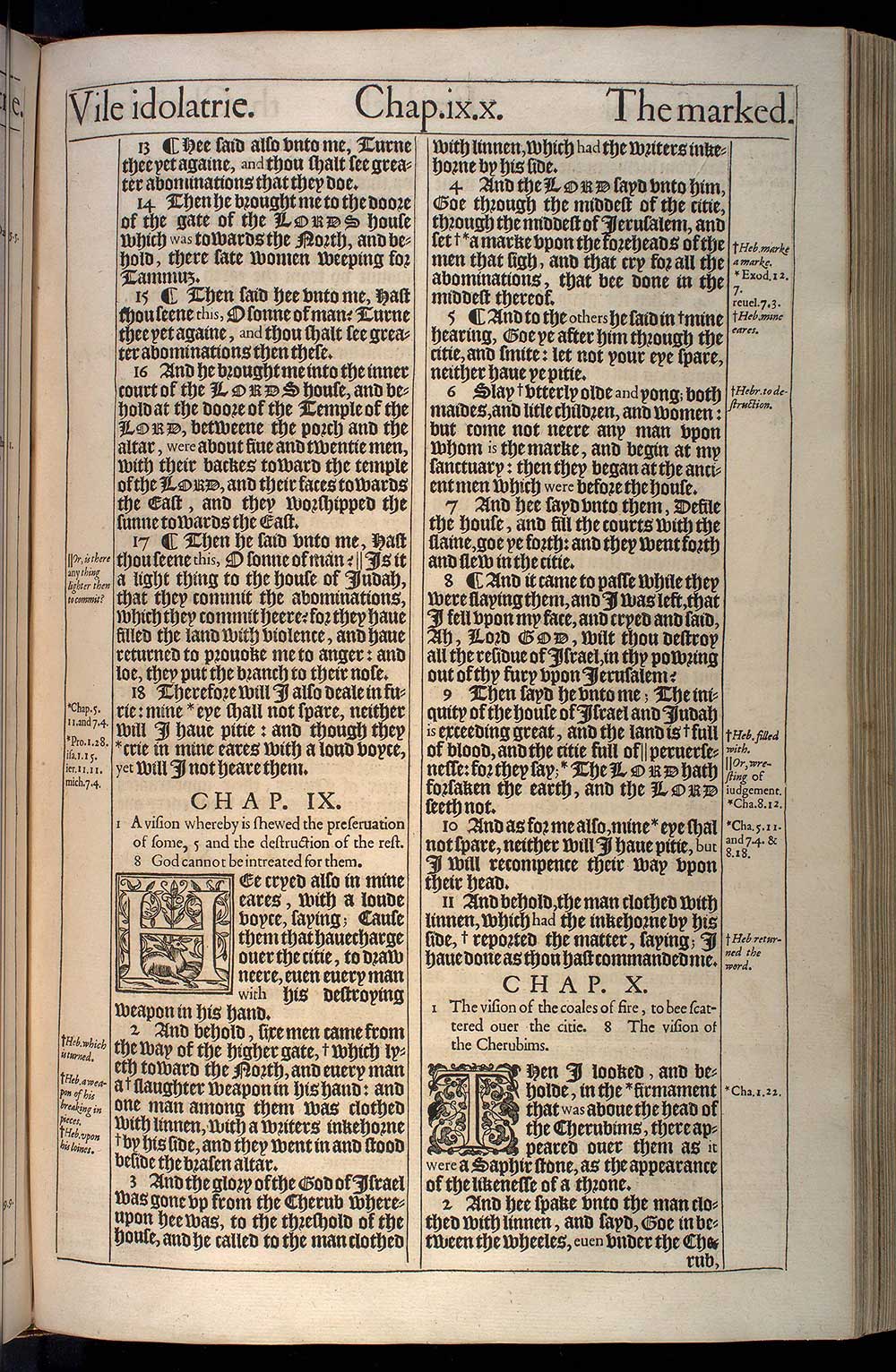 1 A vision whereby is shewed the preseruation of some, 5 and the destruction of the rest. 8 God cannot be intreated for them.

1Hee cryed also in mine eares, with a loude voyce, saying; Cause them that hauecharge ouer the citie, to draw neere, euen euery man with his destroying weapon in his hand.

2And behold, sixe men came from the way of the higher gate, which lyeth toward the North, and euery man a slaughter weapon in his hand: and one man among them was clothed with linnen, with a writers inkehorne by his side, and they went in and stood beside the brasen altar.2

3And the glory of the God of Israel was gone vp from the Cherub whereupon hee was, to the threshold of the house, and he called to the man clothed with linnen, which had the writers inkehorne by his side.

5¶ And to the others he said in mine hearing, Goe ye after him through the citie, and smite: let not your eye spare, neither haue ye pitie.5

6Slay vtterly olde and yong; both maides, and litle children, and women: but come not neere any man vpon whom is the marke, and begin at my sanctuary: then they began at the ancient men which were before the house.6

7And hee sayd vnto them, Defile the house, and fill the courts with the slaine, goe ye forth: and they went forth and slew in the citie.

8¶ And it came to passe while they were slaying them, and I was left, that I fell vpon my face, and cryed and said, Ah, Lord God, wilt thou destroy all the residue of Israel, in thy powring out of thy fury vpon Ierusalem?

9Then sayd he vnto me; The iniquity of the house of Israel and Iudah is exceeding great, and the land is full of blood, and the citie full of peruersenesse: for they say; The Lord hath forsaken the earth, and the Lord seeth not.9

10And as for me also, mine eye shal not spare, neither will I haue pitie, but I will recompence their way vpon their head.10

11And behold, the man clothed with linnen, which had the inkehorne by his side, reported the matter, saying; I haue done as thou hast commanded me.11