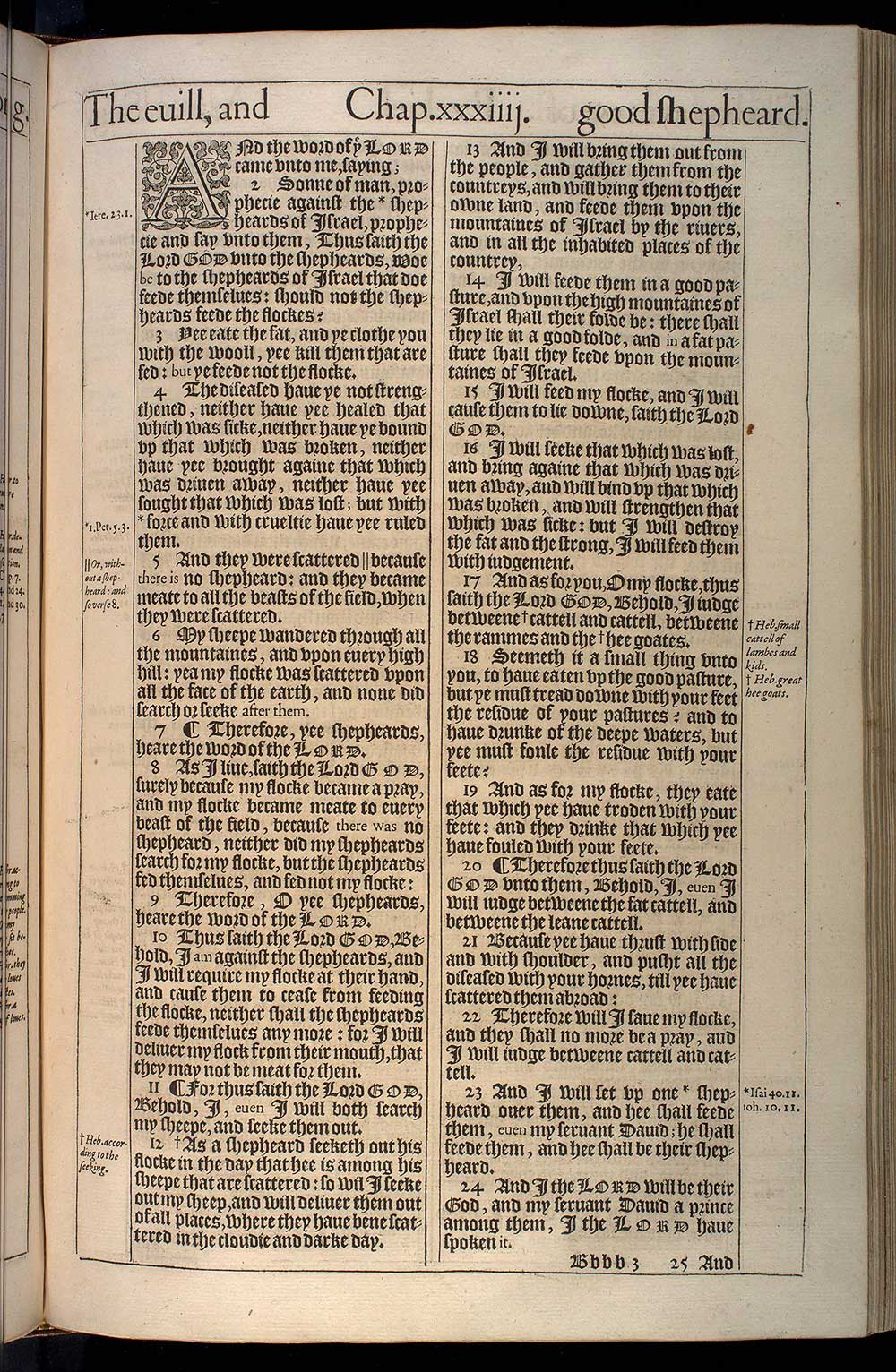 1 A reproofe of the shepheards. 7 Gods iudgement against them. 11 His prouidence for his flocke. 20 The kingdome of Christ.

1And the word of þe Lord came vnto me, saying;

3Yee eate the fat, and ye clothe you with the wooll, yee kill them that are fed: but ye feede not the flocke.

6My sheepe wandered through all the mountaines, and vpon euery high hill: yea my flocke was scattered vpon all the face of the earth, and none did search or seeke after them.

7¶ Therefore, yee shepheards, heare the word of the Lord.

9Therefore, O yee shepheards, heare the word of the Lord.

10Thus saith the Lord God, Behold, I am against the shepheards, and I will require my flocke at their hand, and cause them to cease from feeding the flocke, neither shall the shepheards feede themselues any more: for I will deliuer my flock from their mouth, that they may not be meat for them.

11¶ For thus saith the Lord God, Behold, I, euen I will both search my sheepe, and seeke them out.

12As a shepheard seeketh out his flocke in the day that hee is among his sheepe that are scattered: so wil I seeke out my sheep, and will deliuer them out of all places, where they haue bene scattered in the cloudie and darke day.12

15I will feed my flocke, and I will cause them to lie downe, saith the Lord God.

17And as for you, O my flocke, thus saith the Lord God, Behold, I iudge betweene cattell and cattell, betweene the rammes and the hee goates.17

20¶ Therefore thus saith the Lord God vnto them, Behold, I, euen I will iudge betweene the fat cattell, and betweene the leane cattell.

21Because yee haue thrust with side and with shoulder, and pusht all the diseased with your hornes, till yee haue scattered them abroad:

22Therefore will I saue my flocke, and they shall no more be a pray, and I will iudge betweene cattell and cattell.

24And I the Lord will be their God, and my seruant Dauid a prince among them, I the Lord haue spoken it.

25And I will make with them a couenant of peace, and will cause the euill beasts to cease out of the land: and they shall dwell safely in the wildernesse, and sleepe in the woods.

26And I will make them and the places round about my hill, a blessing; and I will cause the showre to come downe in his season: there shall bee showres of blessing.

27And the tree of the field shal yeeld her fruite, and the earth shall yeeld her increase, and they shall be safe in their land, and shall know that I am the Lord, when I haue broken the bands of their yoke, and deliuered them out of the hand of those that serued themselues of them.

28And they shall no more be a pray to the heathen, neither shall the beasts of the land deuoure them; but they shall dwell safely, and none shall make them afraide.

29And I will raise vp for them a plant of renowne, and they shall be no more consumed with hunger in the land, neither beare the shame of the heathen any more.29

30Thus shall they know that I the Lord their God am with them, and that they, euen the house of Israel, are my people, saith the Lord God.

31And yee my flocke of my pasture, are men, and I am your God, saith the Lord God.31