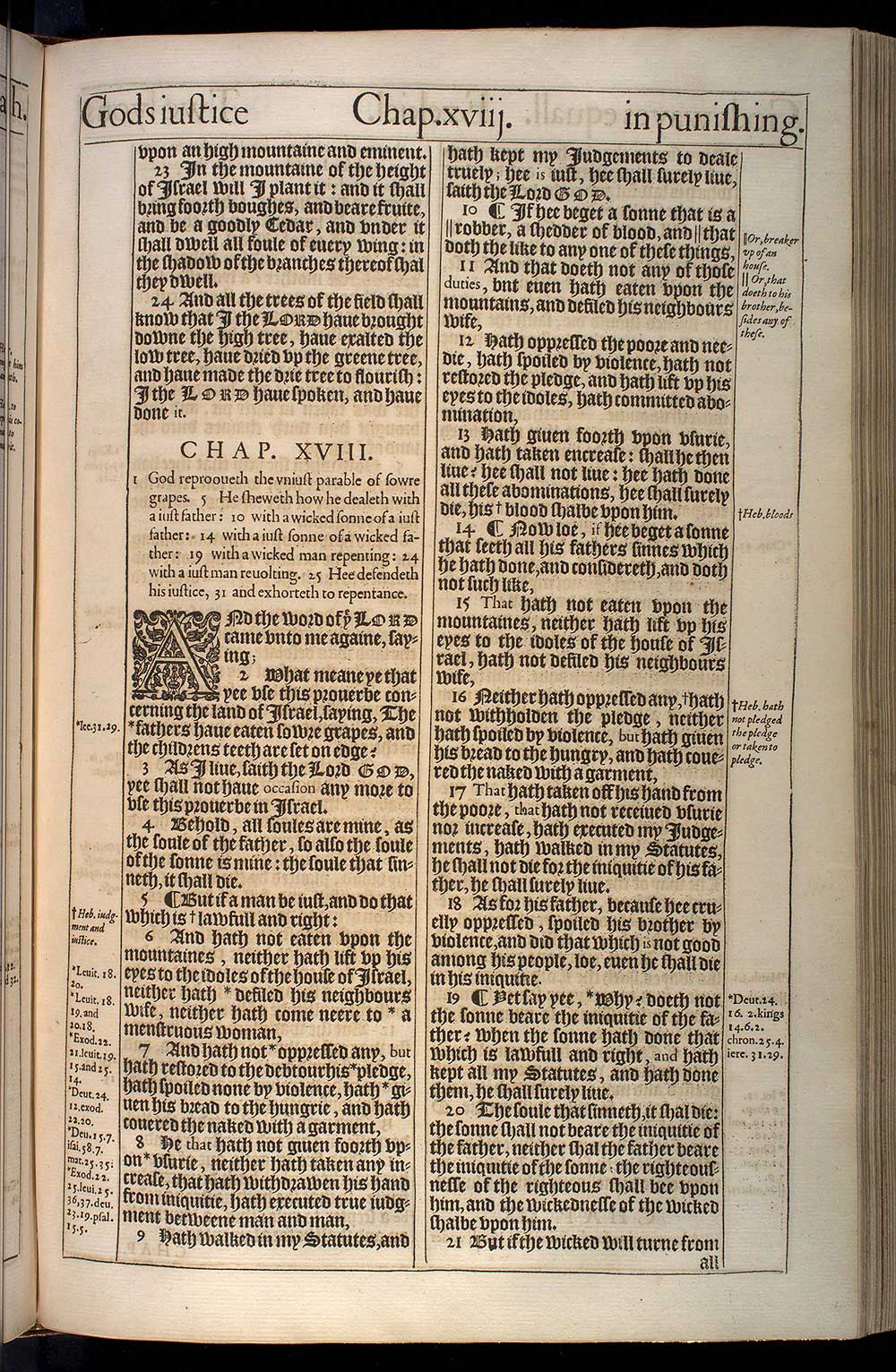 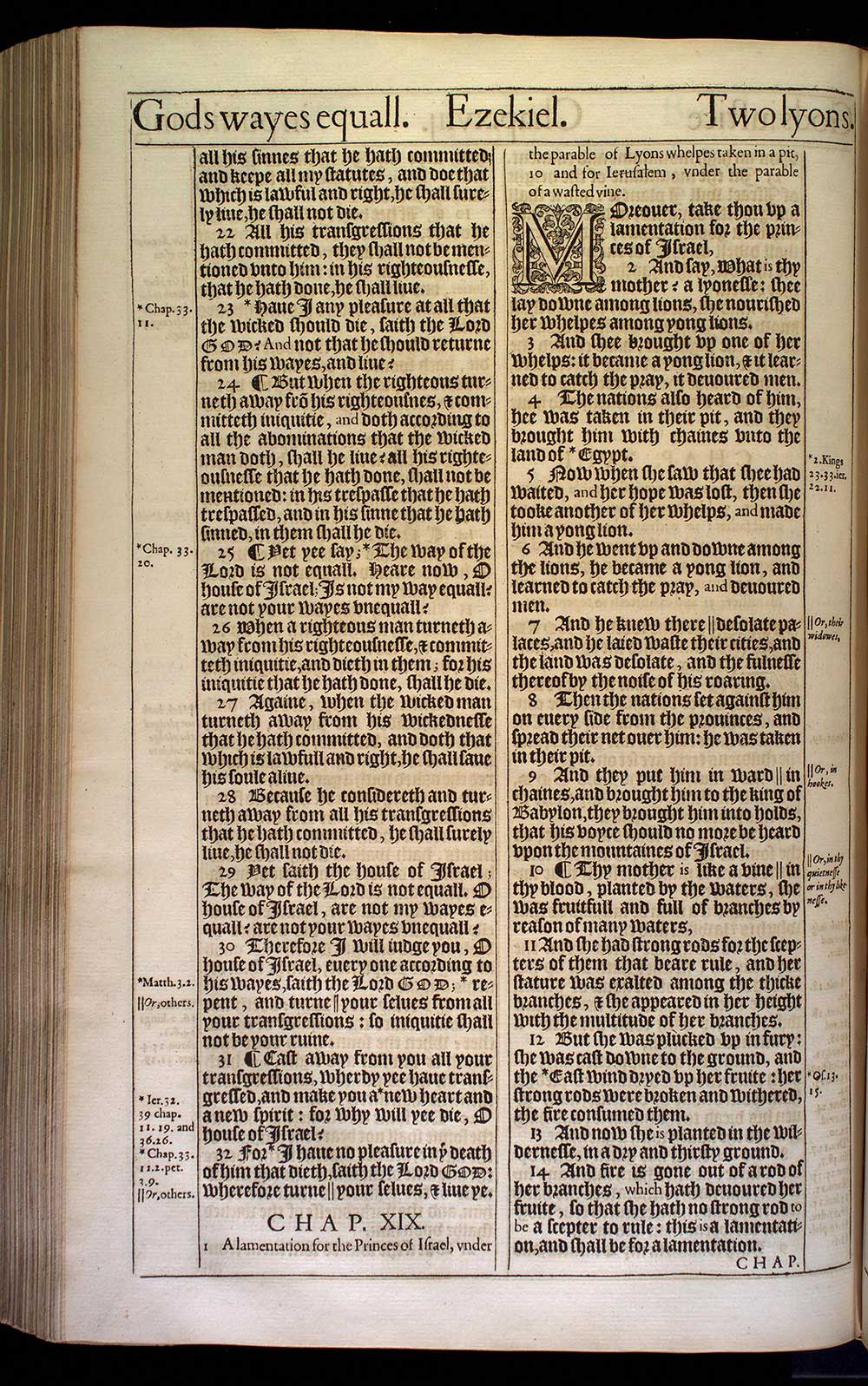 1And the word of þe Lord came vnto me againe, saying;

2What meane ye that yee vse this prouerbe concerning the land of Israel, saying, The fathers haue eaten sowre grapes, and the childrens teeth are set on edge?2

3As I liue, saith the Lord God, yee shall not haue occasion any more to vse this prouerbe in Israel.

5¶ But if a man be iust, and do that which is lawfull and right:5

6And hath not eaten vpon the mountaines, neither hath lift vp his eyes to the idoles of the house of Israel, neither hath defiled his neighbours wife, neither hath come neere to a menstruous woman,6

7And hath not oppressed any, but hath restored to the debtourhis pledge, hath spoiled none by violence, hath giuen his bread to the hungrie, and hath couered the naked with a garment,7

8He that hath not giuen foorth vpon vsurie, neither hath taken any increase, that hath withdrawen his hand from iniquitie, hath executed true iudgement betweene man and man,8

9Hath walked in my Statutes, and hath kept my Iudgements to deale truely; hee is iust, hee shall surely liue, saith the Lord God.

10¶ If hee beget a sonne that is a robber, a shedder of blood, and that doth the like to any one of these things,10

11And that doeth not any of those duties, bnt euen hath eaten vpon the mountains, and defiled his neighbours wife,

12Hath oppressed the poore and needie, hath spoiled by violence, hath not restored the pledge, and hath lift vp his eyes to the idoles, hath committed abomination,

13Hath giuen foorth vpon vsurie, and hath taken encrease: shall he then liue? hee shall not liue: hee hath done all these abominations, hee shall surely die, his blood shalbe vpon him.13

14¶ Now loe, if hee beget a sonne that seeth all his fathers sinnes which he hath done, and considereth, and doth not such like,

15That hath not eaten vpon the mountaines, neither hath lift vp his eyes to the idoles of the house of Israel, hath not defiled his neighbours wife,

16Neither hath oppressed any, hath not withholden the pledge, neither hath spoiled by violence, but hath giuen his bread to the hungry, and hath couered the naked with a garment,16

17That hath taken off his hand from the poore, that hath not receiued vsurie nor increase, hath executed my Iudgements, hath walked in my Statutes, he shall not die for the iniquitie of his father, he shall surely liue.

18As for his father, because hee cruelly oppressed, spoiled his brother by violence, and did that which is not good among his people, loe, euen he shall die in his iniquitie.

19¶ Yet say yee, Why? doeth not the sonne beare the iniquitie of the father? when the sonne hath done that which is lawfull and right, and hath kept all my Statutes, and hath done them, he shall surely liue.19

21But if the wicked will turne from all his sinnes that he hath committed and keepe all my statutes, and doe that which is lawful and right, he shall surely liue, he shall not die.

22All his transgressions that he hath committed, they shall not be mentioned vnto him: in his righteousnesse, that he hath done, he shall liue.

23Haue I any pleasure at all that the wicked should die, saith the Lord God ? And not that he should returne from his wayes, and liue?23

25¶ Yet yee say; The way of the Lord is not equall. Heare now, O house of Israel; Is not my way equall? are not your wayes vnequall?25

26When a righteous man turneth away from his righteousnesse, & committeth iniquitie, and dieth in them; for his iniquitie that he hath done, shall he die.

27Againe, when the wicked man turneth away from his wickednesse that he hath committed, and doth that which is lawfull and right, he shall saue his soule aliue.

28Because he considereth and turneth away from all his transgressions that he hath committed, he shall surely liue, he shall not die.

30Therefore I will iudge you, O house of Israel, euery one according to his wayes, saith the Lord God; repent, and turne your selues from all your transgressions: so iniquitie shall not be your ruine.30

31¶ Cast away from you all your transgressions, wherby yee haue transgressed, and make you a new heart and a new spirit: for why will yee die, O house of Israel?31

32For I haue no pleasure in þe death of him that dieth, saith the Lord God: wherefore turne your selues, & liue ye.32