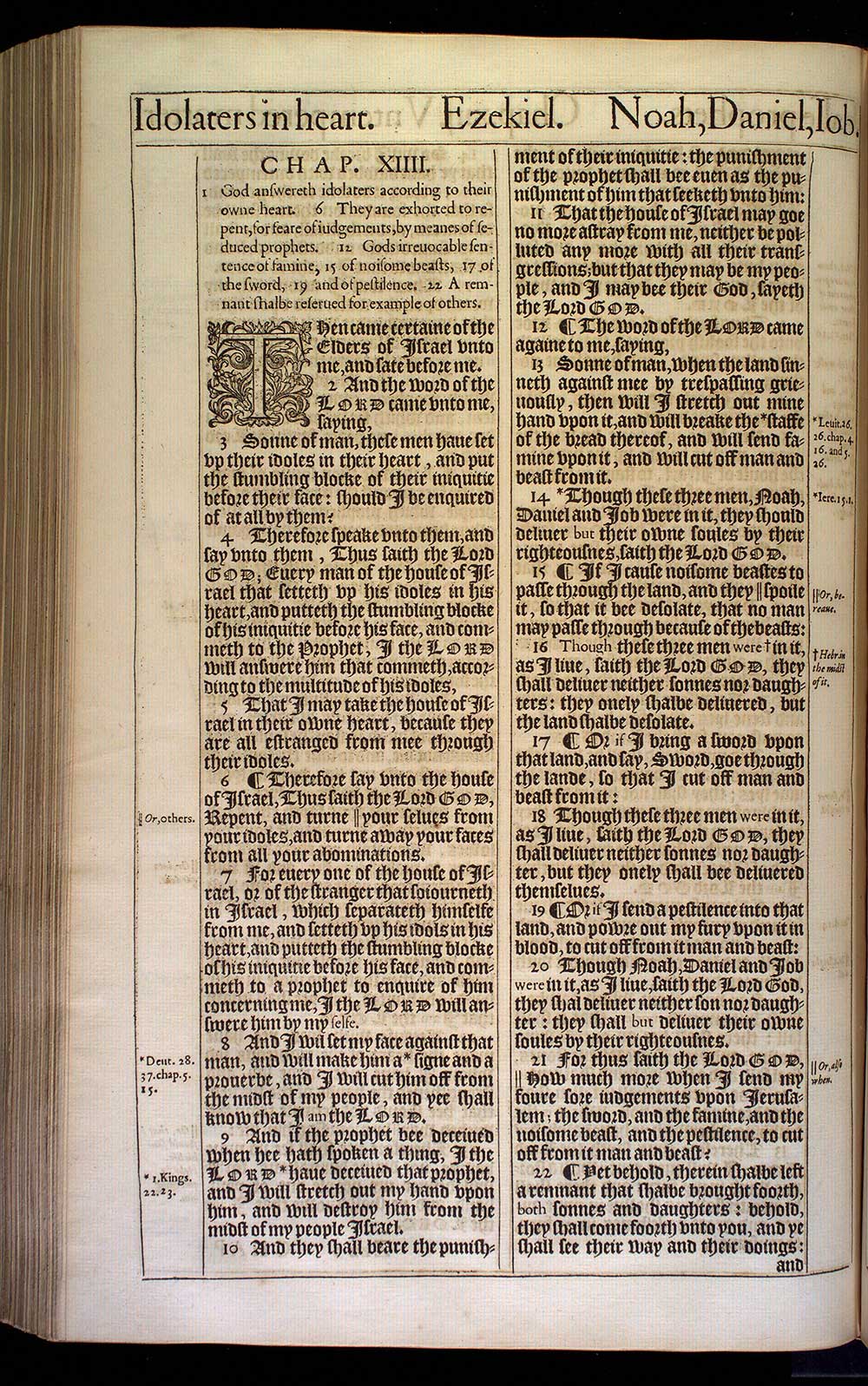 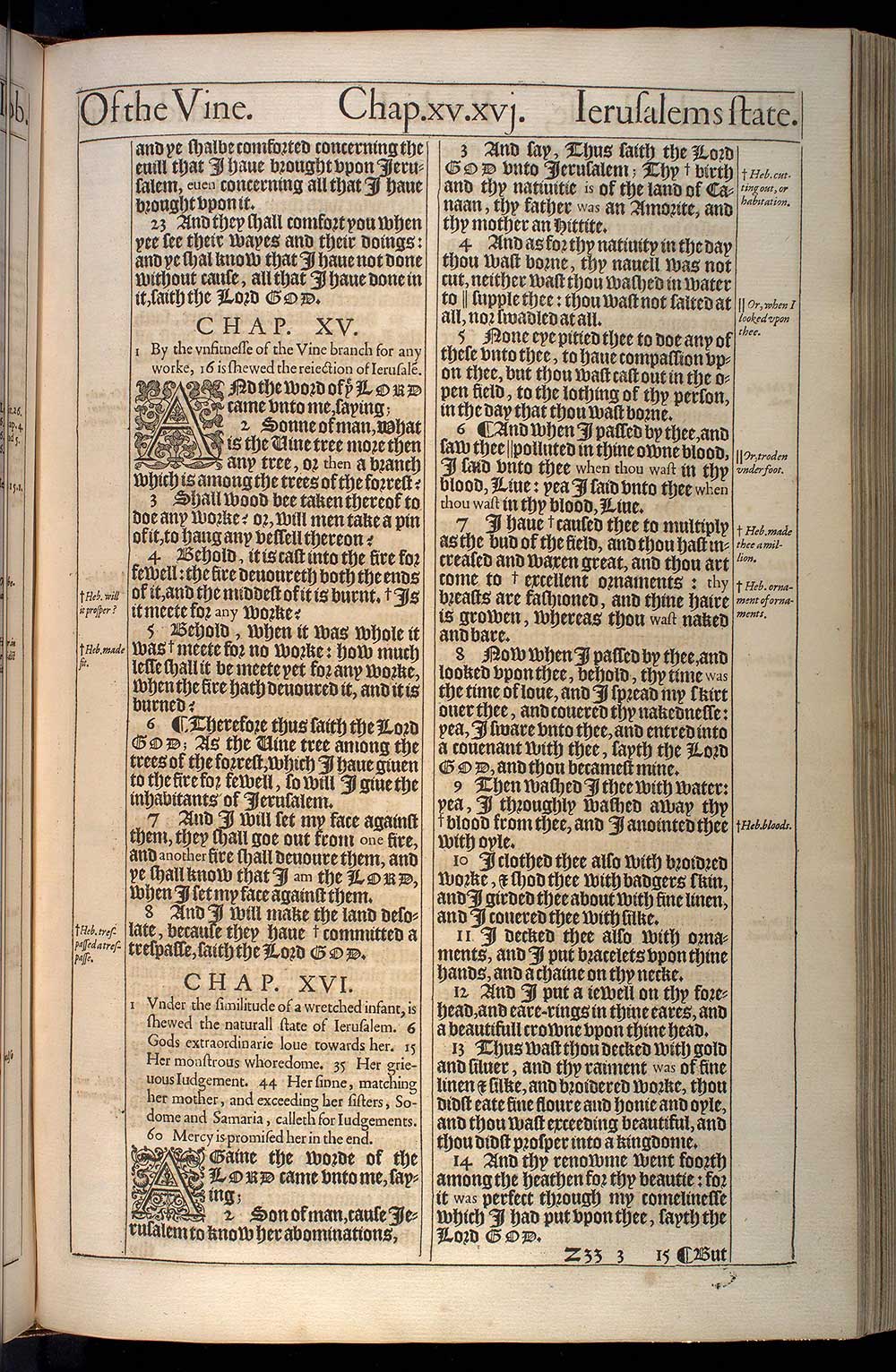 1 God answereth idolaters according to their owne heart. 6 They are exhorted to repent, for feare of iudgements, by meanes of seduced prophets. 12 Gods irreuocable sentence of famine, 15 of noisome beasts, 17 of the sword, 19 and of pestilence. 22 A remnant shalbe reserued for example of others.

1Then came certaine of the Elders of Israel vnto me, and sate before me.

2And the word of the Lord came vnto me, saying,

3Sonne of man, these men haue set vp their idoles in their heart, and put the stumbling blocke of their iniquitie before their face: should I be enquired of at all by them?

4Therefore speake vnto them, and say vnto them, Thus saith the Lord God; Euery man of the house of Israel that setteth vp his idoles in his heart, and putteth the stumbling blocke of his iniquitie before his face, and commeth to the Prophet, I the Lord will answere him that commeth, according to the multitude of his idoles,

5That I may take the house of Israel in their owne heart, because they are all estranged from mee through their idoles.

6¶ Therefore say vnto the house of Israel, Thus saith the Lord God, Repent, and turne your selues from your idoles, and turne away your faces from all your abominations.6

7For euery one of the house of Israel, or of the stranger that soiourneth in Israel, which separateth himselfe from me, and setteth vp his idols in his heart, and putteth the stumbling blocke of his iniquitie before his face, and commeth to a prophet to enquire of him concerning me, I the Lord will answere him by my selfe.

8And I wil set my face against that man, and will make him a signe and a prouerbe, and I will cut him off from the midst of my people, and yee shall know that I am the Lord.8

9And if the prophet bee deceiued when hee hath spoken a thing, I the Lord haue deceiued that prophet, and I will stretch out my hand vpon him, and will destroy him from the midst of my people Israel.9

11That the house of Israel may goe no more astray from me, neither be polluted any more with all their transgressions; but that they may be my people, and I may bee their God, sayeth the Lord God.

12¶ The word of the Lord came againe to me, saying,

13Sonne of man, when the land sinneth against mee by trespassing grieuously, then will I stretch out mine hand vpon it, and will breake the staffe of the bread thereof, and will send famine vpon it, and will cut off man and beast from it.13

14Though these three men, Noah, Daniel and Iob were in it, they should deliuer but their owne soules by their righteousnes, saith the Lord God.14

15¶ If I cause noisome beastes to passe through the land, and they spoile it, so that it bee desolate, that no man may passe through because of the beasts:15

16Though these three men were in it, as I liue, saith the Lord God, they shall deliuer neither sonnes nor daughters: they onely shalbe deliuered, but the land shalbe desolate.16

17¶ Or if I bring a sword vpon that land, and say, Sword, goe through the lande, so that I cut off man and beast from it:

18Though these three men were in it, as I liue, saith the Lord God, they shall deliuer neither sonnes nor daughter, but they onely shall bee deliuered themselues.

19¶ Or if I send a pestilence into that land, and powre out my fury vpon it in blood, to cut off from it man and beast:

20Though Noah, Daniel and Iob were in it, as I liue, saith the Lord God, they shal deliuer neither son nor daughter: they shall but deliuer their owne soules by their righteousnes.

21For thus saith the Lord God, How much more when I send my foure sore iudgements vpon Ierusalem; the sword, and the famine, and the noisome beast, and the pestilence, to cut off from it man and beast?21

23And they shall comfort you when yee see their wayes and their doings: and ye shal know that I haue not done without cause, all that I haue done in it, saith the Lord God.