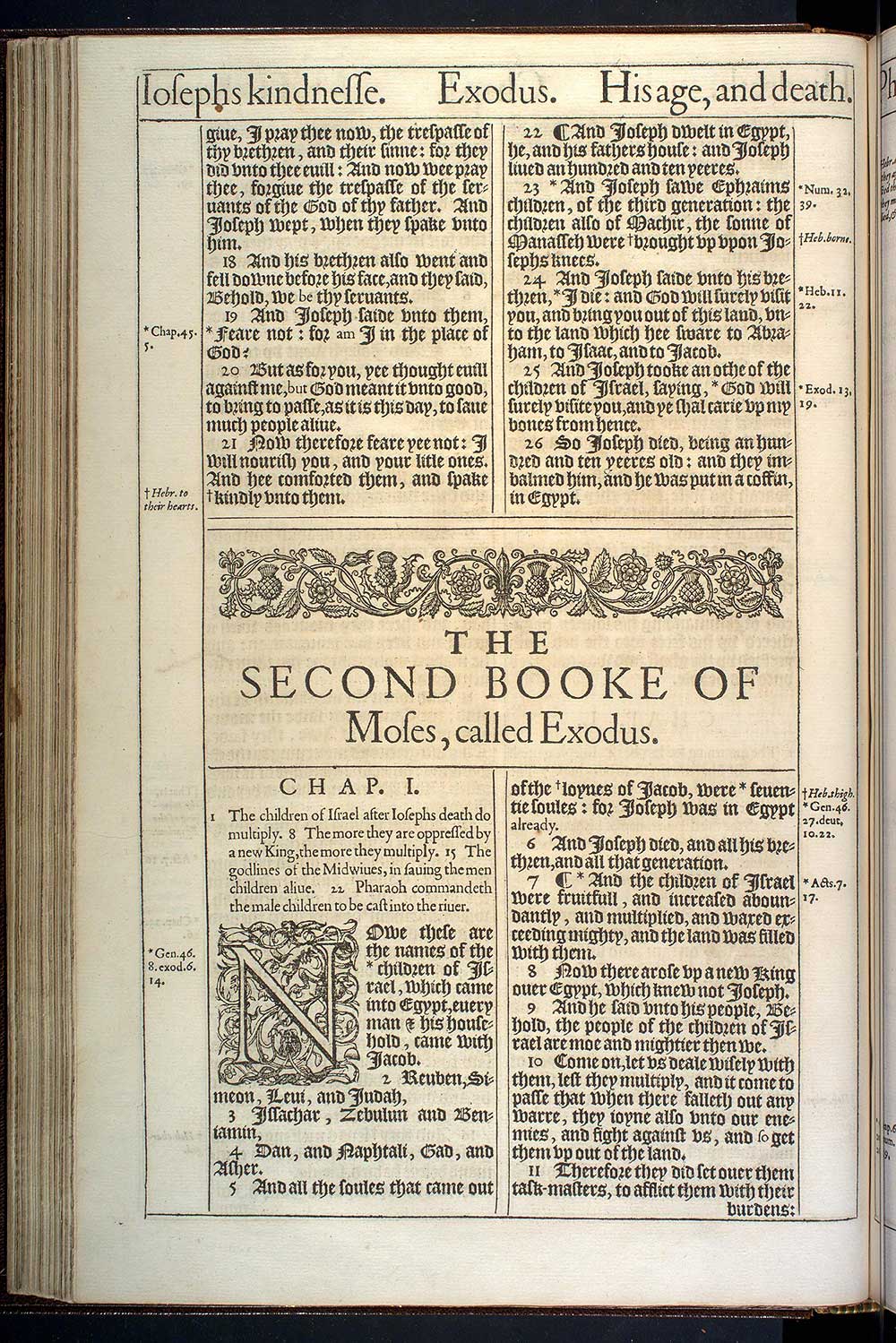 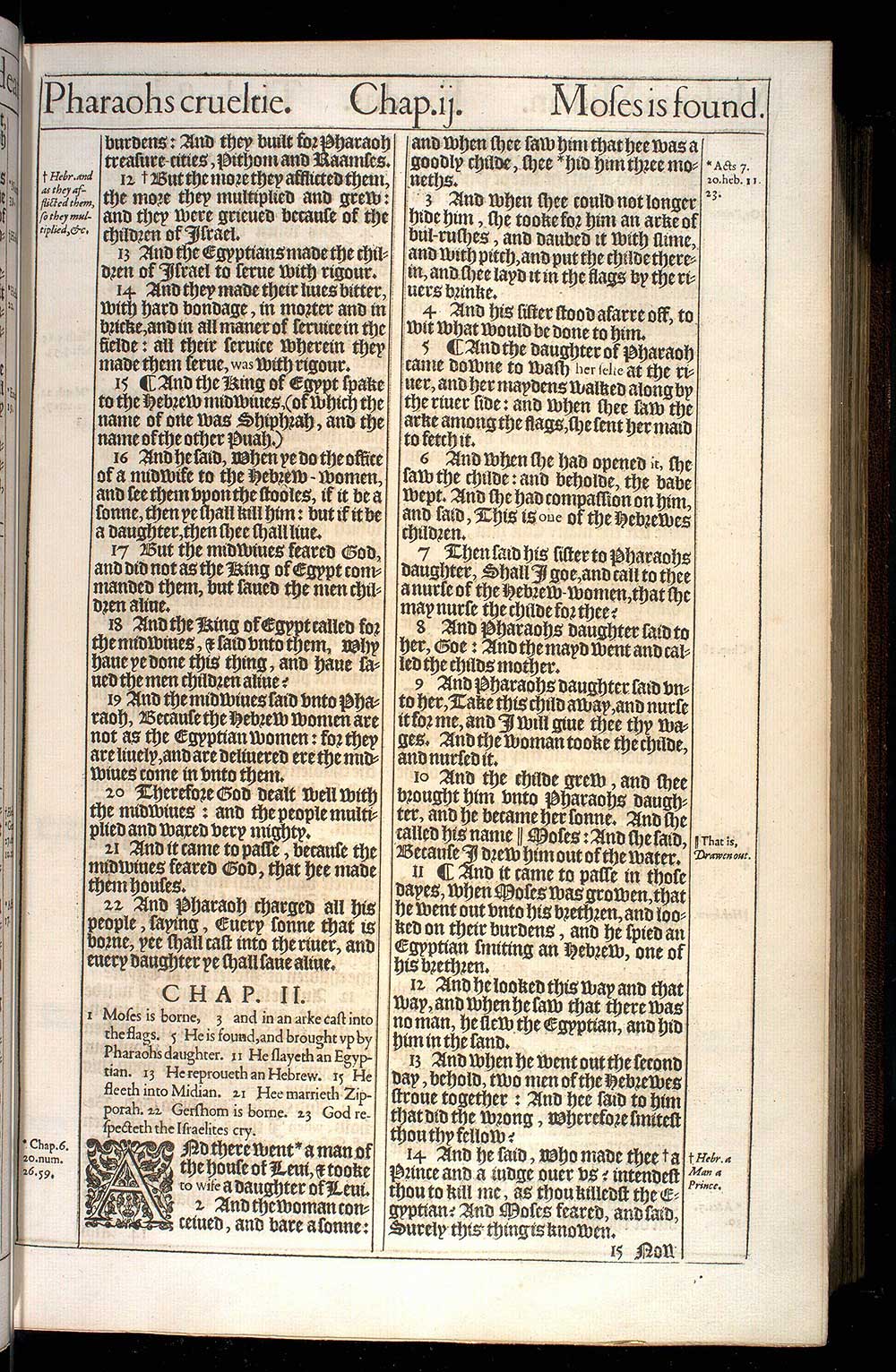 1 The children of Israel after Iosephs death do multiply. 8 The more they are oppressed by a new King, the more they multiply. 15 The godlines of the Midwiues, in sauing the men children aliue. 22 Pharaoh commandeth the male children to be cast into the riuer.

1Nowe these are the names of the children of Israel, which came into Egypt, euery man & his household, came with Iacob.1

4Dan, and Naphtali, Gad, and Asher.

5And all the soules that came out of the loynes of Iacob, were seuentie soules: for Ioseph was in Egypt already.5

6And Ioseph died, and all his brethren, and all that generation.

7¶ And the children of Israel were fruitfull, and increased aboundantly, and multiplied, and waxed exceeding mighty, and the land was filled with them.7

8Now there arose vp a new King ouer Egypt, which knew not Ioseph.

9And he said vnto his people, Behold, the people of the children of Israel are moe and mightier then we.

10Come on, let vs deale wisely with them, lest they multiply, and it come to passe that when there falleth out any warre, they ioyne also vnto our enemies, and fight against vs, and so get them vp out of the land.

11Therefore they did set ouer them task-masters, to afflict them with their burdens: And they built for Pharaoh treasure-cities, Pithom and Raamses.

12But the more they afflicted them, the more they multiplied and grew: and they were grieued because of the children of Israel.12

13And the Egyptians made the children of Israel to serue with rigour.

14And they made their liues bitter, with hard bondage, in morter and in bricke, and in all maner of seruice in the fielde: all their seruice wherein they made them serue, was with rigour.

15¶ And the King of Egypt spake to the Hebrew midwiues, (of which the name of one was Shiphrah, and the name of the other Puah.)

16And he said, When ye do the office of a midwife to the Hebrew-women, and see them vpon the stooles, if it be a sonne, then ye shall kill him: but if it be a daughter, then shee shall liue.

17But the midwiues feared God, and did not as the King of Egypt commanded them, but saued the men children aliue.

18And the King of Egypt called for the midwiues, & said vnto them, Why haue ye done this thing, and haue saued the men children aliue?

19And the midwiues said vnto Pharaoh, Because the Hebrew women are not as the Egyptian women: for they are liuely, and are deliuered ere the midwiues come in vnto them.

20Therefore God dealt well with the midwiues: and the people multiplied and waxed very mighty.

21And it came to passe, because the midwiues feared God, that hee made them houses.

22And Pharaoh charged all his people, saying, Euery sonne that is borne, yee shall cast into the riuer, and euery daughter ye shall saue aliue.