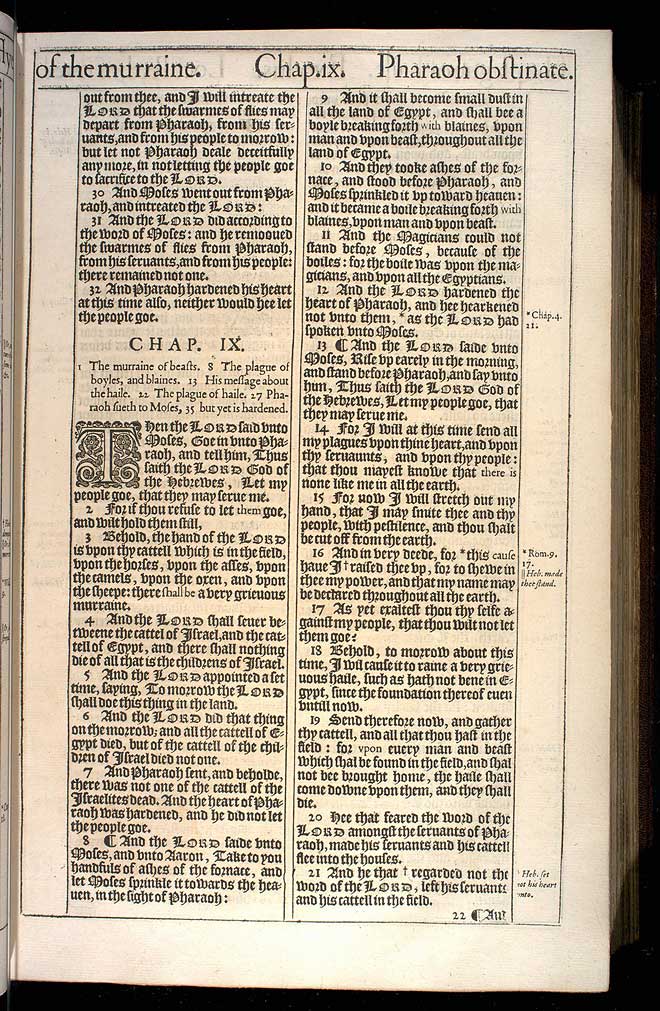 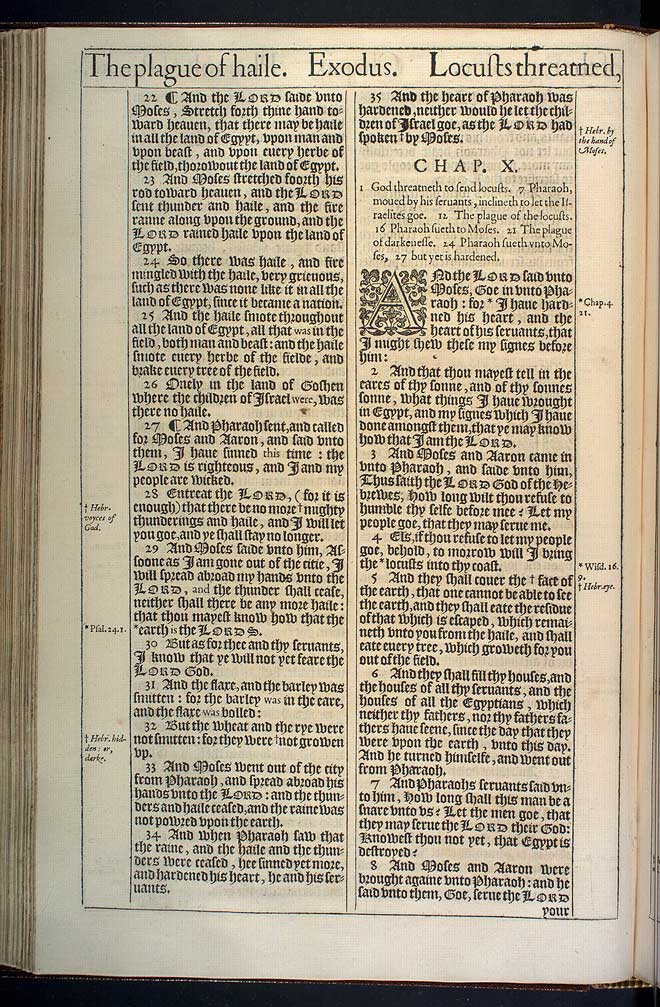 View this Exodus chapter 9 scan at a larger size

1 The murraine of beasts. 8 The plague of boyles, and blaines. 13 His message about the haile. 22 The plague of haile. 27 Pharaoh sueth to Moses, 35 but yet is hardened.

1 Then the Lord said vnto Moses, Goe in vnto Pharaoh, and tell him, Thus saith the Lord God of the Hebrewes, Let my people goe, that they may serue me.

2 For if thou refuse to let them goe, and wilt hold them still,

3 Behold, the hand of the Lord is vpon thy cattell which is in the field, vpon the horses, vpon the asses, vpon the camels, vpon the oxen, and vpon the sheepe: there shall be a very grieuous murraine.

5 And the Lord appointed a set time, saying, To morrow the Lord shall doe this thing in the land.

7 And Pharaoh sent, and beholde, there was not one of the cattell of the Israelites dead. And the heart of Pharaoh was hardened, and he did not let the people goe.

8 ¶ And the Lord saide vnto Moses, and vnto Aaron, Take to you handfuls of ashes of the fornace, and let Moses sprinkle it towards the heauen, in the sight of Pharaoh:

10 And they tooke ashes of the fornace, and stood before Pharaoh, and Moses sprinkled it vp toward heauen: and it became a boile breaking forth with blaines, vpon man and vpon beast.

11 And the Magicians could not stand before Moses, because of the boiles: for the boile was vpon the magicians, and vpon all the Egyptians.

12 And the Lord hardened the heart of Pharaoh, and hee hearkened not vnto them, as the Lord had spoken vnto Moses.12

13 ¶ And the Lord saide vnto Moses, Rise vp earely in the morning, and stand before Pharaoh, and say vnto him, Thus saith the Lord God of the Hebrewes, Let my people goe, that they may serue me.

14 For I will at this time send all my plagues vpon thine heart, and vpon thy seruants, and vpon thy people: that thou mayest knowe that there is none like me in all the earth.

15 For now I will stretch out my hand, that I may smite thee and thy people, with pestilence, and thou shalt be cut off from the earth.

16 And in very deede, for this cause haue I raised thee vp, for to shewe in thee my power, and that my name may be declared throughout all the earth.16

17 As yet exaltest thou thy selfe against my people, that thou wilt not let them goe?

18 Behold, to morrow about this time, I wil cause it to raine a very grieuous haile, such as hath not bene in Egypt, since the foundation thereof euen vntill now.

19 Send therefore now, and gather thy cattell, and all that thou hast in the field: for vpon euery man and beast which shal be found in the field, and shal not bee brought home, the haile shall come downe vpon them, and they shall die.

20 Hee that feared the word of the Lord amongst the seruants of Pharaoh, made his seruants and his cattell flee into the houses.

21 And he that regarded not the word of the Lord, left his seruants and his cattell in the field.21

22 ¶ And the Lord saide vnto Moses, Stretch forth thine hand toward heauen, that there may be haile in all the land of Egypt, vpon man and vpon beast, and vpon euery herbe of the field, thorowout the land of Egypt.

23 And Moses stretched foorth his rod toward heauen, and the Lord sent thunder and haile, and the fire ranne along vpon the ground, and the Lord rained haile vpon the land of Egypt.

24 So there was haile, and fire mingled with the haile, very grieuous, such as there was none like it in all the land of Egypt, since it became a nation.

26 Onely in the land of Goshen where the children of Israel were, was there no haile.

27 ¶ And Pharaoh sent, and called for Moses and Aaron, and said vnto them, I haue sinned this time: the Lord is righteous, and I and my people are wicked.

28 Entreat the Lord, (for it is enough) that there be no more mighty thunderings and haile, and I will let you goe, and ye shall stay no longer.28

29 And Moses saide vnto him, Assoone as I am gone out of the citie, I will spread abroad my hands vnto the Lord, and the thunder shall cease, neither shall there be any more haile: that thou mayest know how that the earth is the Lords.29

30 But as for thee and thy seruants, I know that ye will not yet feare the Lord God.

32 But the wheat and the rye were not smitten: for they were not growen vp.32

33 And Moses went out of the city from Pharaoh, and spread abroad his hands vnto the Lord: and the thunders and haile ceased, and the raine was not powred vpon the earth.

34 And when Pharaoh saw that the raine, and the haile and the thunders were ceased, hee sinned yet more, and hardened his heart, he and his seruants.

35 And the heart of Pharaoh was hardened, neither would he let the children of Israel goe, as the Lord had spoken by Moses.35