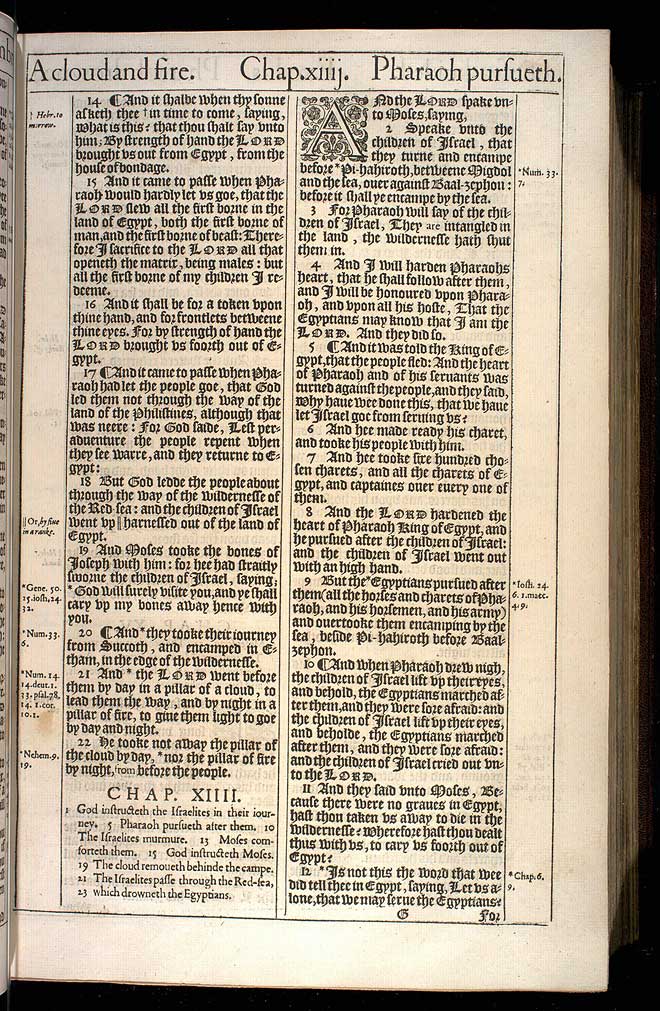 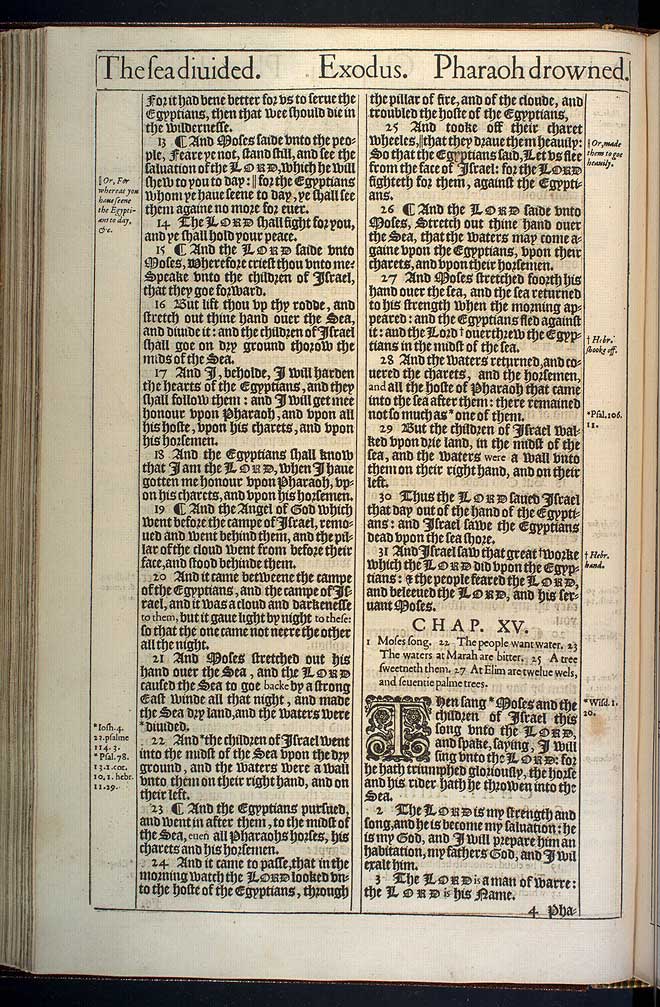 View this Exodus chapter 14 scan at a larger size

2 Speake vnto the children of Israel, that they turne and encampe before Pi-hahiroth, betweene Migdol and the sea, ouer against Baal-Zephon: before it shall ye encampe by the sea.2

3 For Pharaoh will say of the children of Israel, They are intangled in the land, the wildernesse hath shut them in.

4 And I will harden Pharaohs heart, that he shall follow after them, and I will be honoured vpon Pharaoh, and vpon all his hoste, That the Egyptians may know that I am the Lord. And they did so.

5 ¶ And it was told the King of Egypt, that the people fled: And the heart of Pharaoh and of his seruants was turned against the people, and they said, Why haue wee done this, that we haue let Israel goe from seruing vs?

6 And hee made ready his charet, and tooke his people with him.

7 And hee tooke sixe hundred chosen charets, and all the charets of Egypt, and captaines ouer euery one of them.

9 But the Egyptians pursued after them (all the horses and charets of Pharaoh, and his horsemen, and his army) and ouertooke them encamping by the sea, beside Pi-hahiroth before Baal-Zephon.9

11 And they said vnto Moses, Because there were no graues in Egypt, hast thou taken vs away to die in the wildernesse? Wherefore hast thou dealt thus with vs, to cary vs foorth out of Egypt?

13 ¶ And Moses saide vnto the people, Feare ye not, stand still, and see the saluation of the Lord, which he will shew to you to day: for the Egyptians whom ye haue seene to day, ye shall see them againe no more for euer.13

14 The Lord shall fight for you, and ye shall hold your peace.

15 ¶ And the Lord saide vnto Moses, Wherefore criest thou vnto me? Speake vnto the children of Israel, that they goe forward.

16 But lift thou vp thy rodde, and stretch out thine hand ouer the Sea, and diuide it: and the children of Israel shall goe on dry ground thorow the mids of the Sea.

17 And I, beholde, I will harden the hearts of the Egyptians, and they shall follow them: and I will get mee honour vpon Pharaoh, and vpon all his hoste, vpon his charets, and vpon his horsemen.

18 And the Egyptians shall know that I am the Lord, when I haue gotten me honour vpon Pharaoh, vpon his charets, and vpon his horsemen.

19 ¶ And the Angel of God which went before the campe of Israel, remoued and went behind them, and the pillar of the cloud went from before their face, and stood behinde them.

20 And it came betweene the campe of the Egyptians, and the campe of Israel, and it was a cloud and darkenesse to them, but it gaue light by night to these: so that the one came not neere the other all the night.

21 And Moses stretched out his hand ouer the Sea, and the Lord caused the Sea to goe backe by a strong East winde all that night, and made the Sea dry land, and the waters were diuided.21

22 And the children of Israel went into the midst of the Sea vpon the dry ground, and the waters were a wall vnto them on their right hand, and on their left.22

23 ¶ And the Egyptians pursued, and went in after them, to the midst of the Sea, euen all Pharaohs horses, his charets and his horsemen.

25 And tooke off their charet wheeles, that they draue them heauily: So that the Egyptians said, Let vs flee from the face of Israel: for the Lord fighteth for them, against the Egyptians.25

26 ¶ And the Lord saide vnto Moses, Stretch out thine hand ouer the Sea, that the waters may come againe vpon the Egyptians, vpon their charets, and vpon their horsemen.

27 And Moses stretched foorth his hand ouer the sea, and the sea returned to his strength when the morning appeared: and the Egyptians fled against it: and the Lord ouerthrew the Egyptians in the midst of the sea.27

28 And the waters returned, and couered the charets, and the horsemen, and all the hoste of Pharaoh that came into the sea after them: there remained not so much as one of them.28

29 But the children of Israel walked vpon drie land, in the midst of the sea, and the waters were a wall vnto them on their right hand, and on their left.

30 Thus the Lord saued Israel that day out of the hand of the Egyptians: and Israel sawe the Egyptians dead vpon the sea shore.