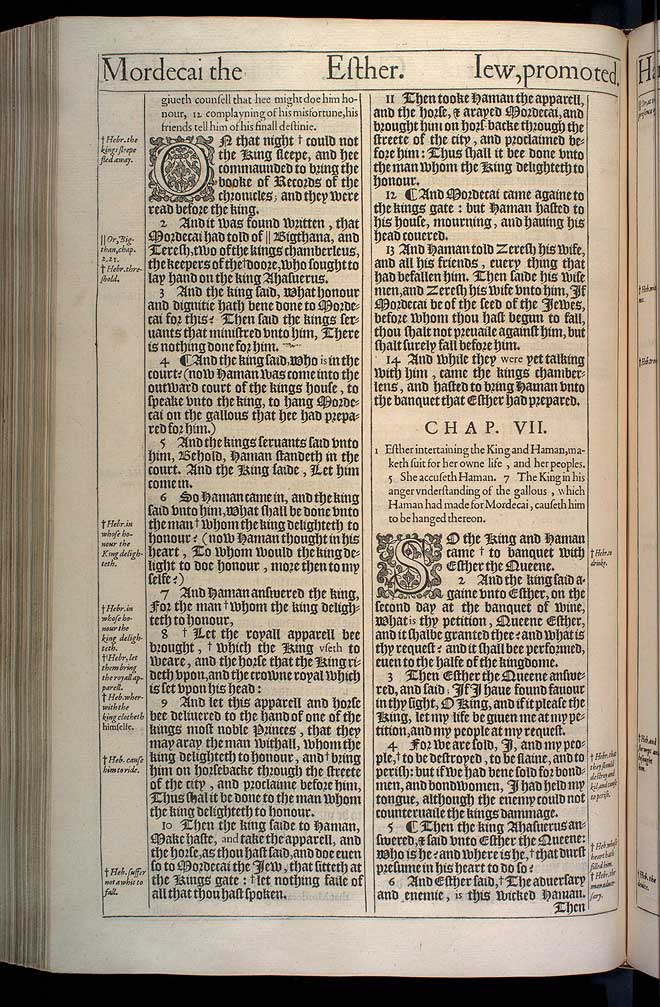 View this Ester chapter 6 scan at a larger size

1 Ahasuerus reading in the Chronicles of the good seruice done by Mordecai, taketh care for his reward. 4 Haman comming to sue that Mordecai might bee hanged, vnawares giueth counsell that hee might doe him honour, 12 complayning of his misfortune, his friends tell him of his finall destinie.

1 On that night could not the King sleepe, and hee commaunded to bring the booke of Records of the chronicles; and they were read before the king.1

2 And it was found written, that Mordecai had told of Bigthana, and Teresh, two of the kings chamberleus, the keepers of the doore, who sought to lay hand on the king Ahasuerus.2

3 And the king said, What honour and dignitie hath bene done to Mordecai for this? Then said the kings seruants that ministred vnto him, There is nothing done for him.

4 ¶ And the king said, Who is in the court? (now Haman was come into the outward court of the kings house, to speake vnto the king, to hang Mordecai on the gallons that hee had prepared for him.)

5 And the kings seruants said vnto him, Behold, Haman standeth in the court. And the King saide, Let him come in.

6 So Haman came in, and the king said vnto him, What shall be done vnto the man whom the king delighteth to honour? (now Haman thought in his heart, To whom would the king delight to doe honour, more then to my selfe?)6

7 And Haman answered the king, For the man whom the king delighteth to honour,7

8 Let the royall apparell bee brought, which the King vseth to weare, and the horse that the King rideth vpon, and the crowne royal which is set vpon his head:8

10 Then the king saide to Haman, Make haste, and take the apparell, and the horse, as thou hast said, and doe euen so to Mordecai the Iew, that sitteth at the Kings gate: let nothing faile of all that thou hast spoken.10

11 Then tooke Haman the apparell, and the horse, & arayed Mordecai, and brought him on hors-backe through the streete of the city, and proclaimed before him: Thus shall it bee done vnto the man whom the King delighteth to honour.

12 ¶ And Mordecai came againe to the kings gate: but Haman hasted to his house, mourning, and hauing his head couered.

13 And Haman told Zeresh his wife, and all his friends, euery thing that had befallen him. Then saide his wise men, and Zeresh his wife vnto him, If Mordecai be of the seed of the Iewes, before whom thou hast begun to fall, thou shalt not preuaile against him, but shalt surely fall before him.

14 And while they were yet talking with him, came the kings chamberlens, and hasted to bring Haman vnto the banquet that Esther had prepared.