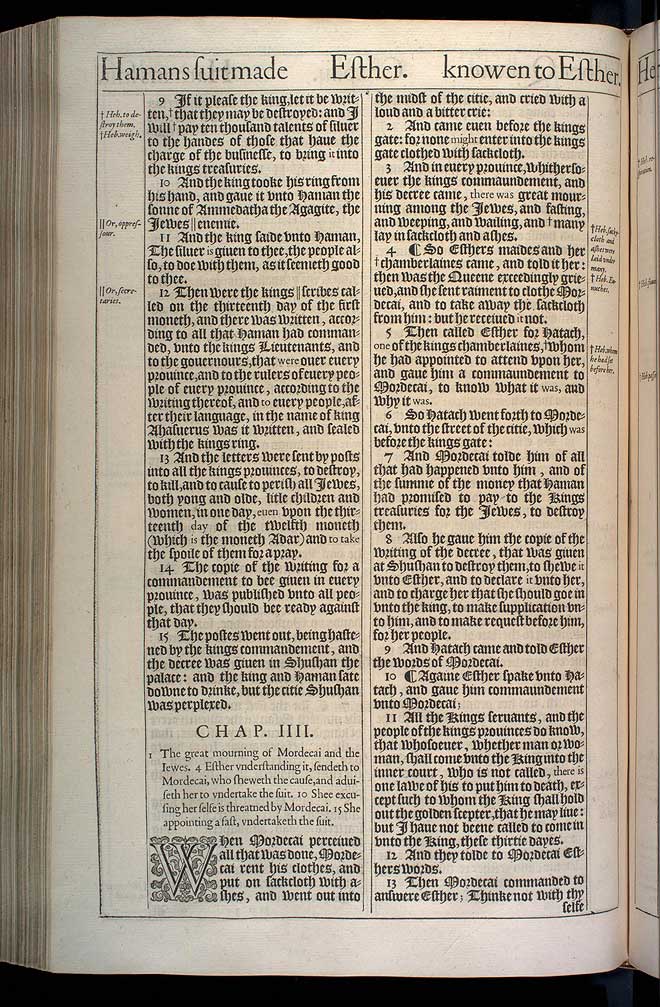 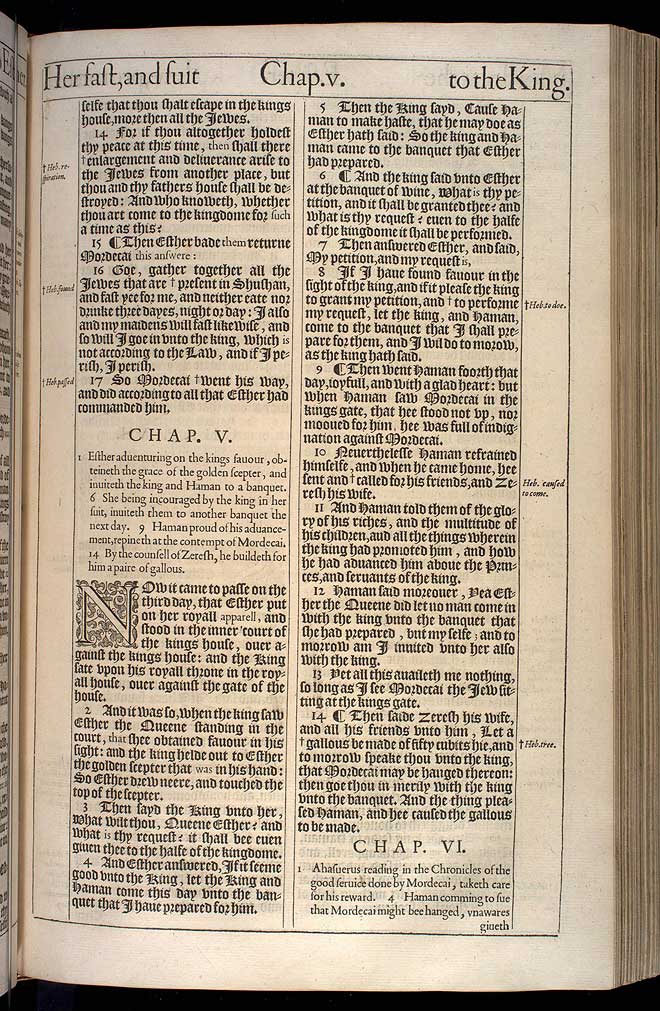 View this Ester chapter 4 scan at a larger size

1 The great mourning of Mordecai and the Iewes. 4 Esther vnderstanding it, sendeth to Mordecai, who sheweth the cause, and aduiseth her to vndertake the suit. 10 Shee excusing her selfe is threatned by Mordecai. 15 She appointing a fast, vndertaketh the suit.

1 When Mordecai perceiued all that was done, Mordecai rent his clothes, and put on sackcloth with ashes, and went out into the midst of the citie, and cried with a loud and a bitter crie:

3 And in euery prouince, whithersoeuer the kings commaundement, and his decree came, there was great mourning among the Iewes, and fasting, and weeping, and wailing, and many lay in sackcloth and ashes.3

4 ¶ So Esthers maides and her chamberlaines came, and told it her: then was the Queene exceedingly grieued, and she sent raiment to clothe Mordecai, and to take away the sackcloth from him: but he receiued it not.4

5 Then called Esther for Hatach, one of the kings chamberlaines, whom he had appointed to attend vpon her, and gaue him a commaundement to Mordecai, to know what it was, and why it was.5

6 So Hatach went forth to Mordecai, vnto the street of the citie, which was before the kings gate:

7 And Mordecai tolde him of all that had happened vnto him, and of the summe of the money that Haman had promised to pay to the Kings treasuries for the Iewes, to destroy them.

8 Also he gaue him the copie of the writing of the decree, that was giuen at Shushan to destroy them, to shewe it vnto Esther, and to declare it vnto her, and to charge her that she should goe in vnto the king, to make supplication vnto him, and to make request before him, for her people.

9 And Hatach came and told Esther the words of Mordecai.

11 All the Kings seruants, and the people of the kings prouinces do know, that whosoeuer, whether man or woman, shall come vnto the King into the inner court, who is not called, there is one lawe of his to put him to death, except such to whom the King shall hold out the golden scepter, that he may liue: but I haue not beene called to come in vnto the King, these thirtie dayes.

12 And they tolde to Mordecai Esthers words.

13 Then Mordecai commanded to answere Esther; Thinke not with thy selfe that thou shalt escape in the kings house, more then all the Iewes.

14 For if thou altogether holdest thy peace at this time, then shall there enlargement and deliuerance arise to the Iewes from another place, but thou and thy fathers house shall be destroyed: And who knoweth, whether thou art come to the kingdome for such a time as this?14

15 ¶ Then Esther bade them returne Mordecai this answere:

16 Goe, gather together all the Iewes that are present in Shushan, and fast yee for me, and neither eate nor drinke three dayes, night or day: I also and my maidens will fast likewise, and so will I goe in vnto the king, which is not according to the Law, and if I perish, I perish.16

17 So Mordecai went his way, and did according to all that Esther had commanded him.17