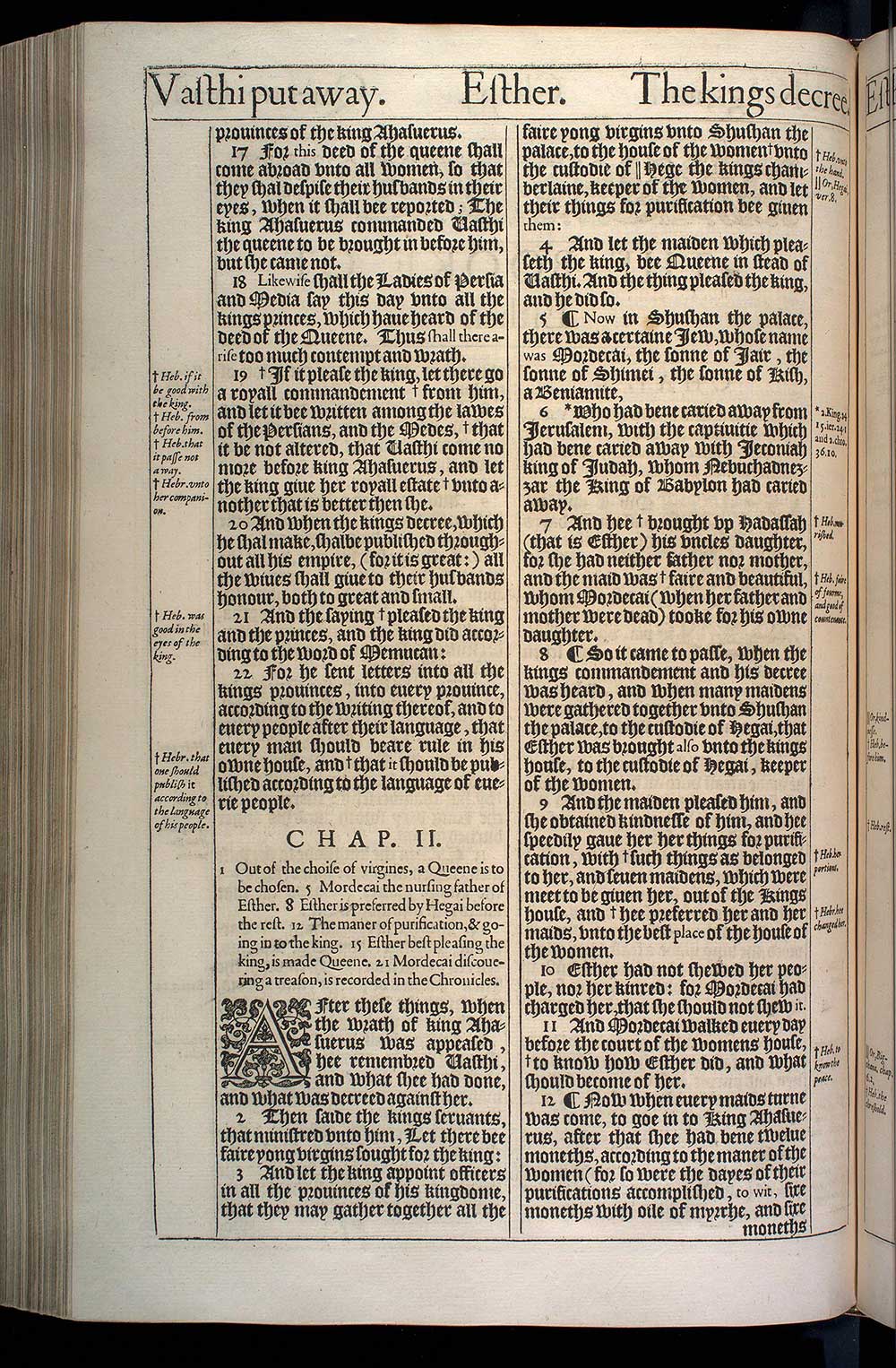 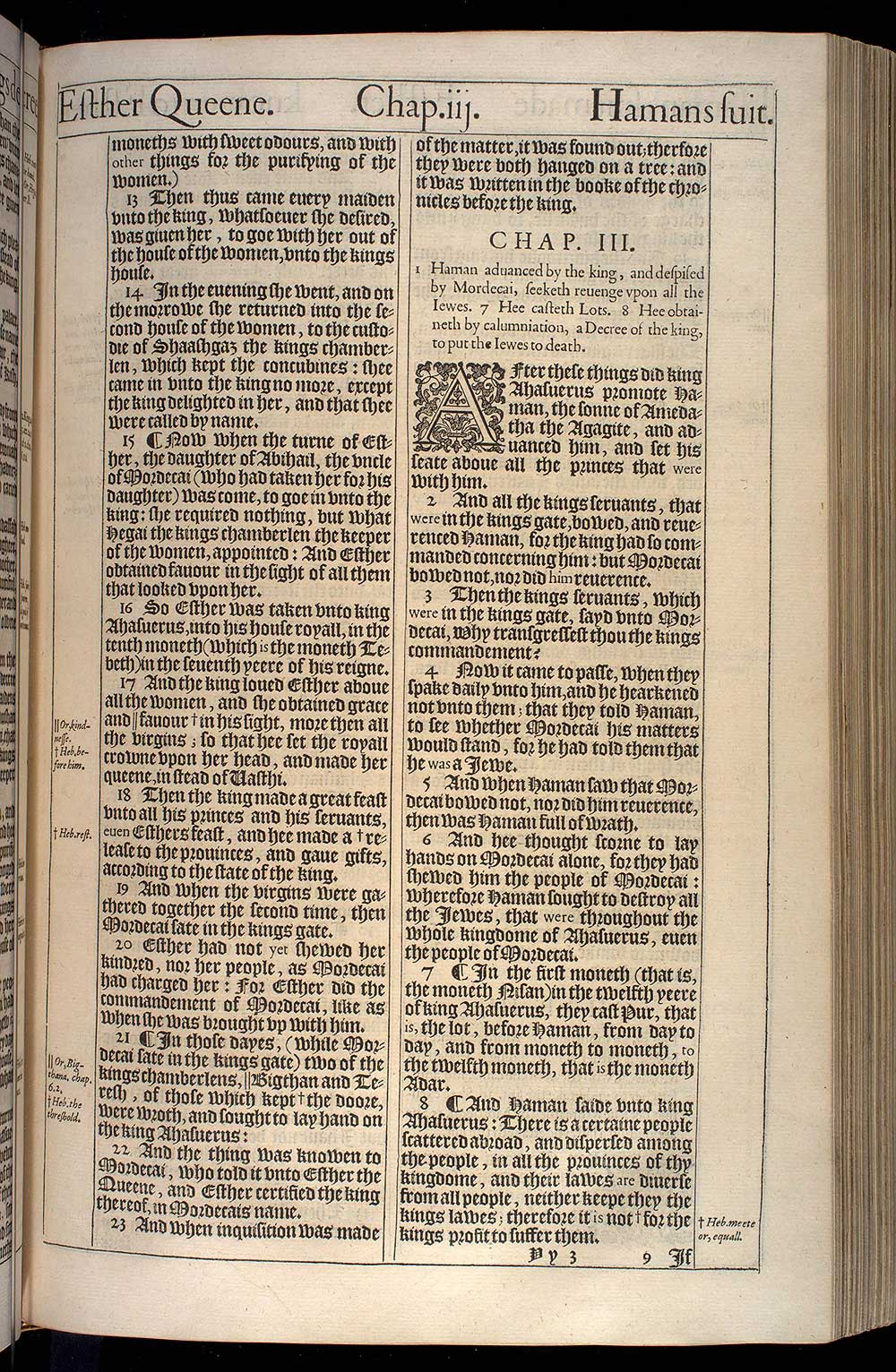 1 Out of the choise of virgines, a Queene is to be chosen. 5 Mordecai the nursing father of Esther. 8 Esther is preferred by Hegai before the rest. 12 The maner of purification, & going in to the king. 15 Esther best pleasing the king, is made Queene. 21 Mordecai discouering a treason, is recorded in the Chronicles.

1After these things, when the wrath of king Ahasuerus was appeased, hee remembred Uasthi, and what shee had done, and what was decreed against her.

2Then saide the kings seruants, that ministred vnto him, Let there bee faire yong virgins sought for the king:

3And let the king appoint officers in all the prouinces of his kingdome, that they may gather together all the faire yong virgins vnto Shushan the palace, to the house of the women vnto the custodie of Hege the kings chamberlaine, keeper of the women, and let their things for purification bee giuen them:3

4And let the maiden which pleaseth the king, bee Queene in stead of Uasthi. And the thing pleased the king, and he did so.

7And hee brought vp Hadassah (that is Esther) his vncles daughter, for she had neither father nor mother, and the maid was faire and beautiful, whom Mordecai (when her father and mother were dead) tooke for his owne daughter.7

9And the maiden pleased him, and she obtained kindnesse of him, and hee speedily gaue her her things for purification, with such things as belonged to her, and seuen maidens, which were meet to be giuen her, out of the Kings house, and hee preferred her and her maids, vnto the best place of the house of the women.9

10Esther had not shewed her people, nor her kinred: for Mordecai had charged her, that she should not shew it.

11And Mordecai walked euery day before the court of the womens house, to know how Esther did, and what should become of her.11

12¶ Now when euery maids turne was come, to goe in to King Ahasnerus, after that shee had bene twelue moneths, according to the maner of the women (for so were the dayes of their purifications accomplished, to wit, sixe moneths with oile of myrrhe, and sixe moneths with sweet odours, and with other things for the purifying of the women.)

13Then thus came euery maiden vnto the king, whatsoeuer she desired, was giuen her, to goe with her out of the house of the women, vnto the kings house.

14In the euening she went, and on the morrowe she returned into the second house of the women, to the custodie of Shaashgaz the kings chamberlen, which kept the concubines: shee came in vnto the king no more, except the king delighted in her, and that shee were called by name.

15¶ Now when the turne of Esther, the daughter of Abihail, the vncle of Mordecai (who had taken her for his daughter) was come, to goe in vnto the king: she required nothing, but what Hegai the kings chamberlen the keeper of the women, appointed: And Esther obtained fauour in the sight of all them that looked vpon her.

16So Esther was taken vnto king Ahasuerus, into his house royall, in the tenth moneth (which is the moneth Tebeth) in the seuenth yeere of his reigne.

17And the king loued Esther aboue all the women, and she obtained grace and fauour in his sight, more then all the virgins; so that hee set the royall crowne vpon her head, and made her queene, in stead of Uasthi.17

18Then the king made a great feast vnto all his princes and his seruants, euen Esthers feast, and hee made a release to the prouinces, and gaue gifts, according to the state of the king.18

19And when the virgins were gathered together the second time, then Mordecai sate in the kings gate.

20Esther had not yet shewed her kindred, nor her people, as Mordecai had charged her: For Esther did the commandement of Mordecai, like as when she was brought vp with him.

21¶ In those dayes, (while Mordecai sate in the kings gate) two of the kings chamberlens, Bigthan and Teresh, of those which kept the doore, were wroth, and sought to lay hand on the king Ahasuerus:21

22And the thing was knowen to Mordecai, who told it vnto Esther the Queene, and Esther certified the king thereof, in Mordecais name.

23And when inquisition was made of the matter, it was found out; therfore they were both hanged on a tree: and it was written in the booke of the chronicles before the king.