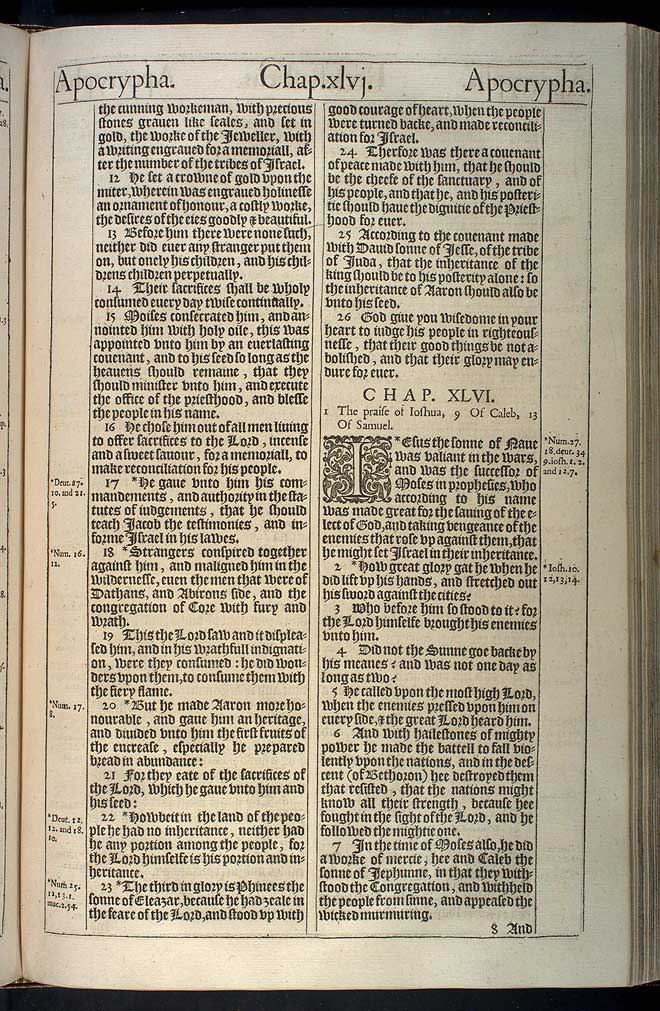 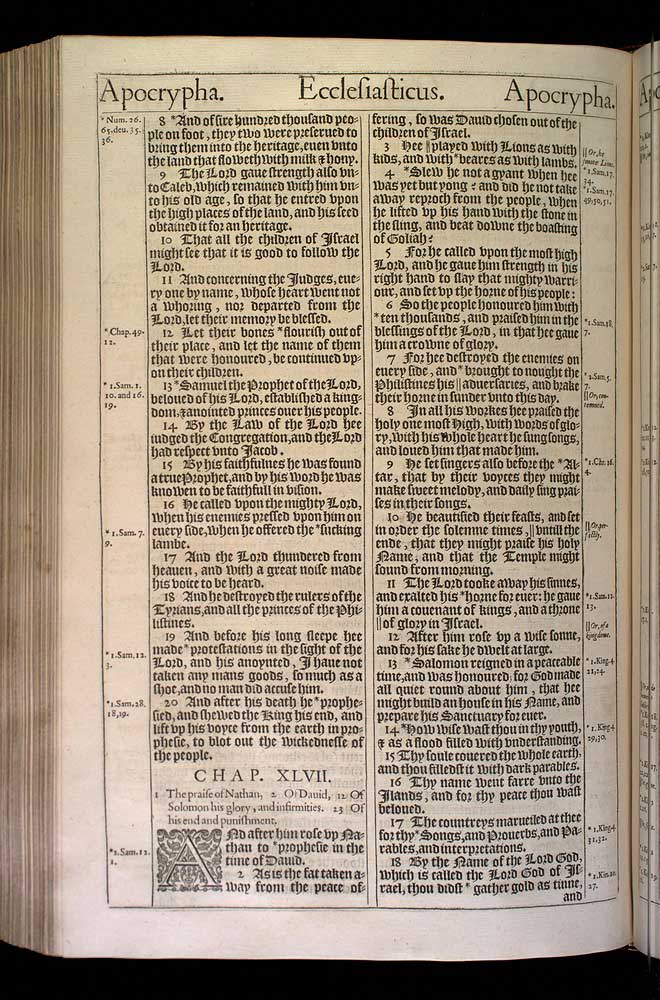 View this Ecclesiasticus chapter 46 scan at a larger size

1 Iesus the sonne of Naue was valiant in the wars, and was the successor of Moses in prophesies, who according to his name was made great for the sauing of the elect of God, and taking vengeance of the enemies that rose vp against them, that he might set Israel in their inheritance.1

2 How great glory gat he when he did lift vp his hands, and stretched out his sword against the cities?2

3 Who before him so stood to it? for the Lord himselfe brought his enemies vnto him.

4 Did not the Sunne goe backe by his meanes? and was not one day as long as two?

5 He called vpon the most high Lord, when the enemies pressed vpon him on euery side, & the great Lord heard him.

6 And with hailestones of mighty power he made the battell to fall violently vpon the nations, and in the descent (of Bethoron) hee destroyed them that resisted, that the nations might know all their strength, because hee fought in the sight of the Lord, and he followed the mightie one.

7 In the time of Moses also, he did a worke of mercie, hee and Caleb the sonne of Iephunne, in that they withstood the Congregation, and withheld the people from sinne, and appeased the wicked murmuring.

8 And of sixe hundred thousand people on foot, they two were preserued to bring them into the heritage, euen vnto the land that floweth with milk & hony.8

9 The Lord gaue strength also vnto Caleb, which remained with him vnto his old age, so that he entred vpon the high places of the land, and his seed obtained it for an heritage.

11 And concerning the Iudges, euery one by name, whose heart went not a whoring, nor departed from the Lord, let their memory be blessed.

12 Let their bones flourish out of their place, and let the name of them that were honoured, be continued vpon their children.12

13 Samuel the Prophet of the Lord, beloued of his Lord, established a kingdom, & anointed princes ouer his people.13

14 By the Law of the Lord hee iudged the Congregation, and the Lord had respect vnto Iacob.

15 By his faithfulnes he was found a true Prophet, and by his word he was knowen to be faithfull in vision.

16 He called vpon the mighty Lord, when his enemies pressed vpon him on euery side, when he offered the sucking lambe.16

17 And the Lord thundered from heauen, and with a great noise made his voice to be heard.

18 And he destroyed the rulers of the Tyrians, and all the princes of the Philistines.

19 And before his long sleepe hee made protestations in the sight of the Lord, and his anoynted, I haue not taken any mans goods, so much as a shoe, and no man did accuse him.19

20 And after his death he prophesied, and shewed the King his end, and lift vp his voyce from the earth in prophesie, to blot out the wickednesse of the people.20