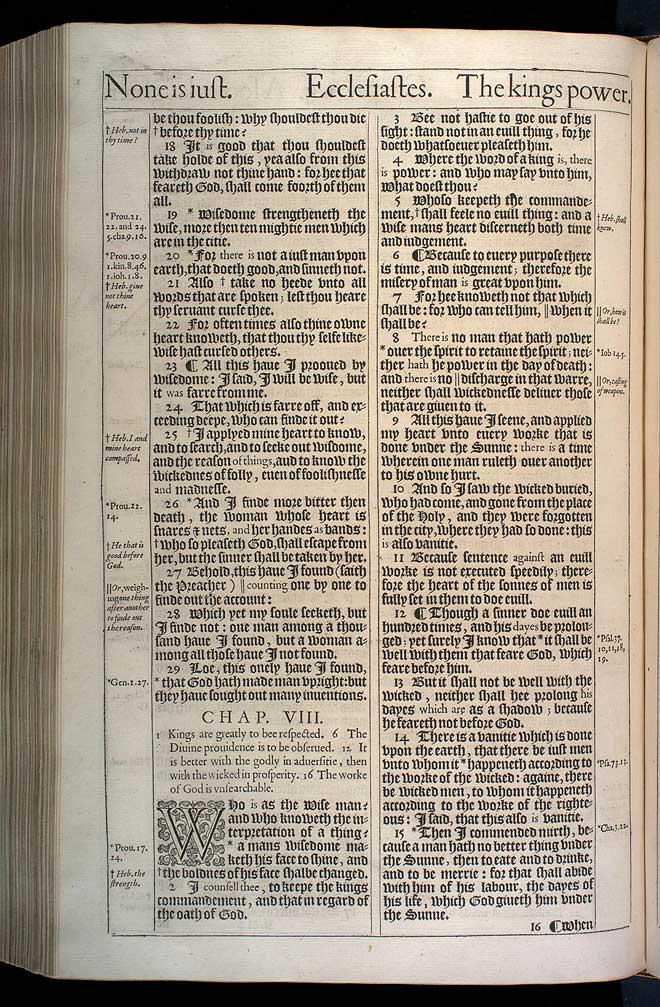 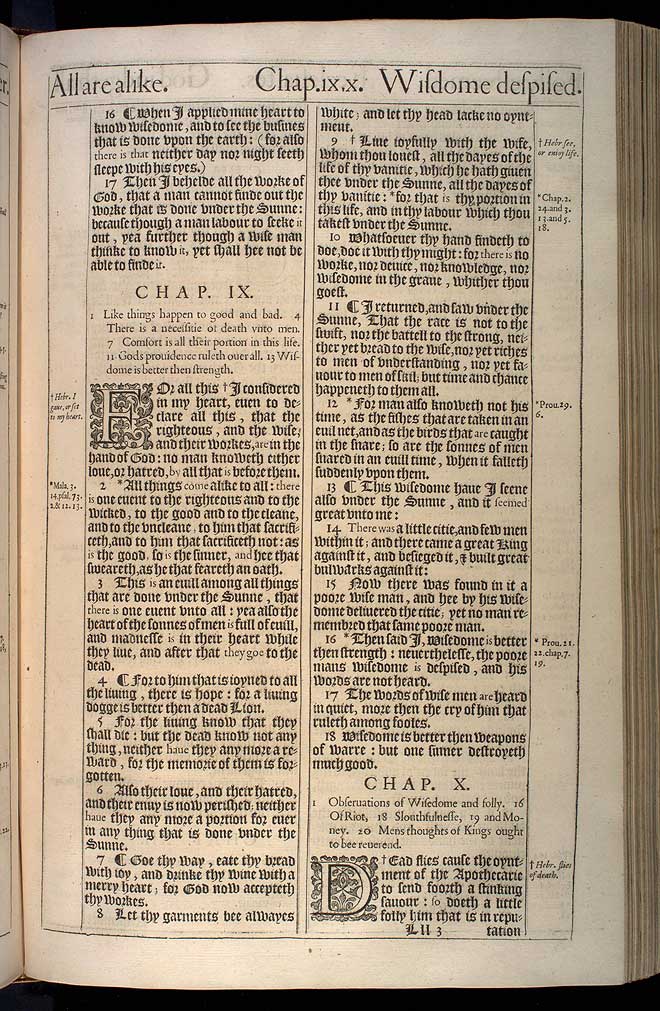 View this Ecclesiastes chapter 8 scan at a larger size

1 Kings are greatly to bee respected. 6 The Diuine prouidence is to be obserued. 12 It is better with the godly in aduersitie, then with the wicked in prosperity. 16 The worke of God is vnsearchable.

1 Who is as the Wise man? and who knoweth the interpretation of a thing? a mans wisedome maketh his face to shine, and the boldnes of his face shalbe changed.1

2 I counsell thee, to keepe the kings commandement, and that in regard of the oath of God.

3 Bee not hastie to goe out of his sight: stand not in an euill thing, for he doeth whatsoeuer pleaseth him.

4 Where the word of a king is, there is power: and who may say vnto him, What doest thou?

5 Whoso keepeth the commandement, shall feele no euill thing: and a wise mans heart discerneth both time and iudgement.5

6 ¶ Because to euery purpose there is time, and iudgement; therefore the misery of man is great vpon him.

7 For hee knoweth not that which shall be: for who can tell him, when it shall be?7

8 There is no man that hath power ouer the spirit to retaine the spirit; neither hath he power in the day of death: and there is no discharge in that warre, neither shall wickednesse deliuer those that are giuen to it.8

9 All this haue I seene, and applied my heart vnto euery worke that is done vnder the Sunne: there is a time wherein one man ruleth ouer another to his owne hurt.

10 And so I saw the wicked buried, who had come, and gone from the place of the Holy, and they were forgotten in the city, where they had so done: this is also vanitie.

11 Because sentence against an euill worke is not executed speedily; therefore the heart of the sonnes of men is fully set in them to doe euill.

12 ¶ Though a sinner doe euill an hundred times, and his dayes be prolonged; yet surely I know that it shall be well with them that feare God, which feare before him.12

13 But it shall not be well with the wicked, neither shall hee prolong his dayes which are as a shadow; because he feareth not before God.

15 Then I commended mirth, because a man hath no better thing vnder the Sunne, then to eate and to drinke, and to be merrie: for that shall abide with him of his labour, the dayes of his life, which God giueth him vnder the Sunne.15

16 ¶ When I applied mine heart to know wisedome, and to see the busines that is done vpon the earth: (for also there is that neither day nor night seeth sleepe with his eyes.)

17 Then I behelde all the worke of God, that a man cannot finde out the worke that is done vnder the Sunne: because though a man labour to seeke it out, yea further though a wise man thinke to know it, yet shall hee not be able to finde it.