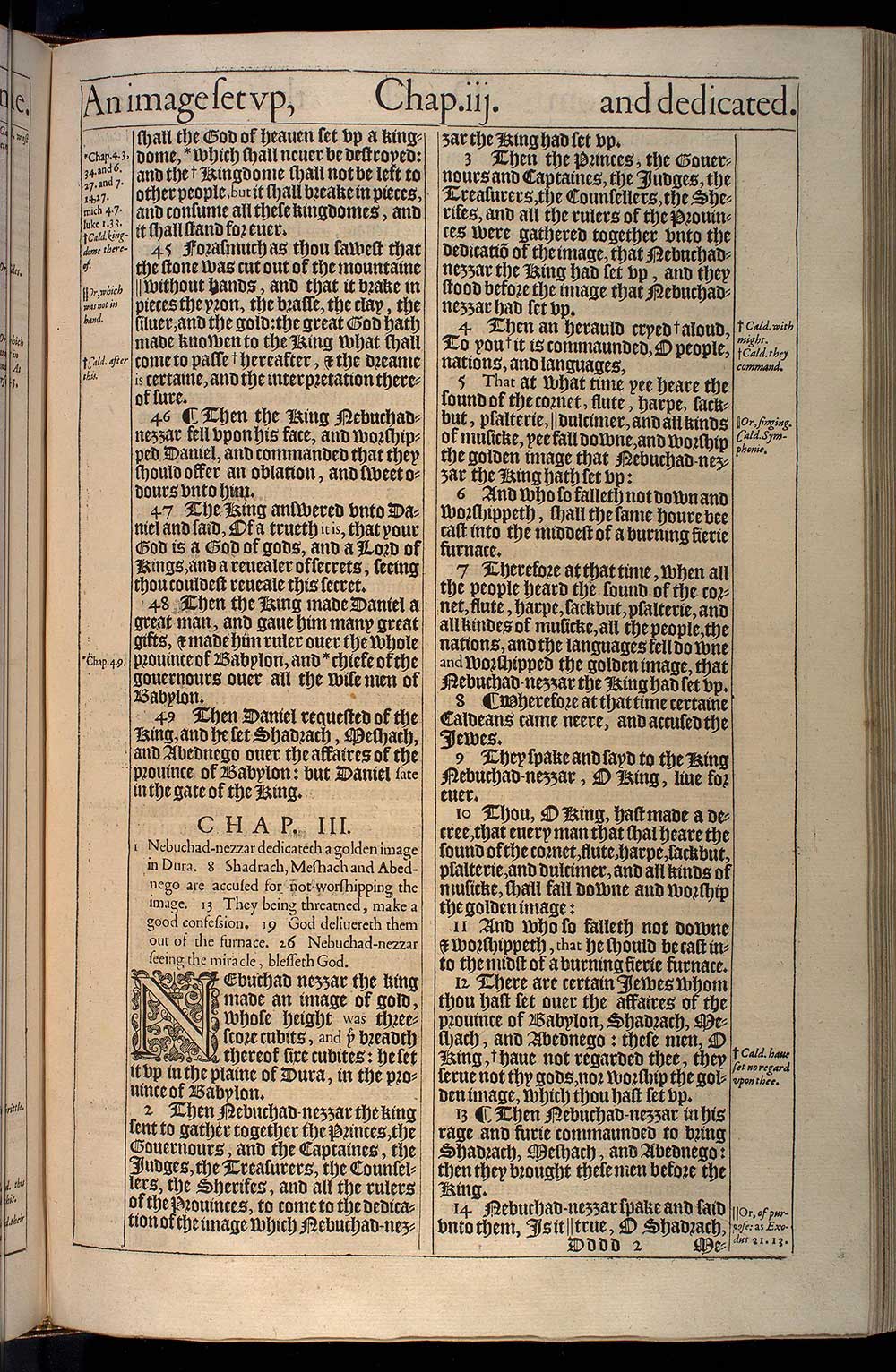 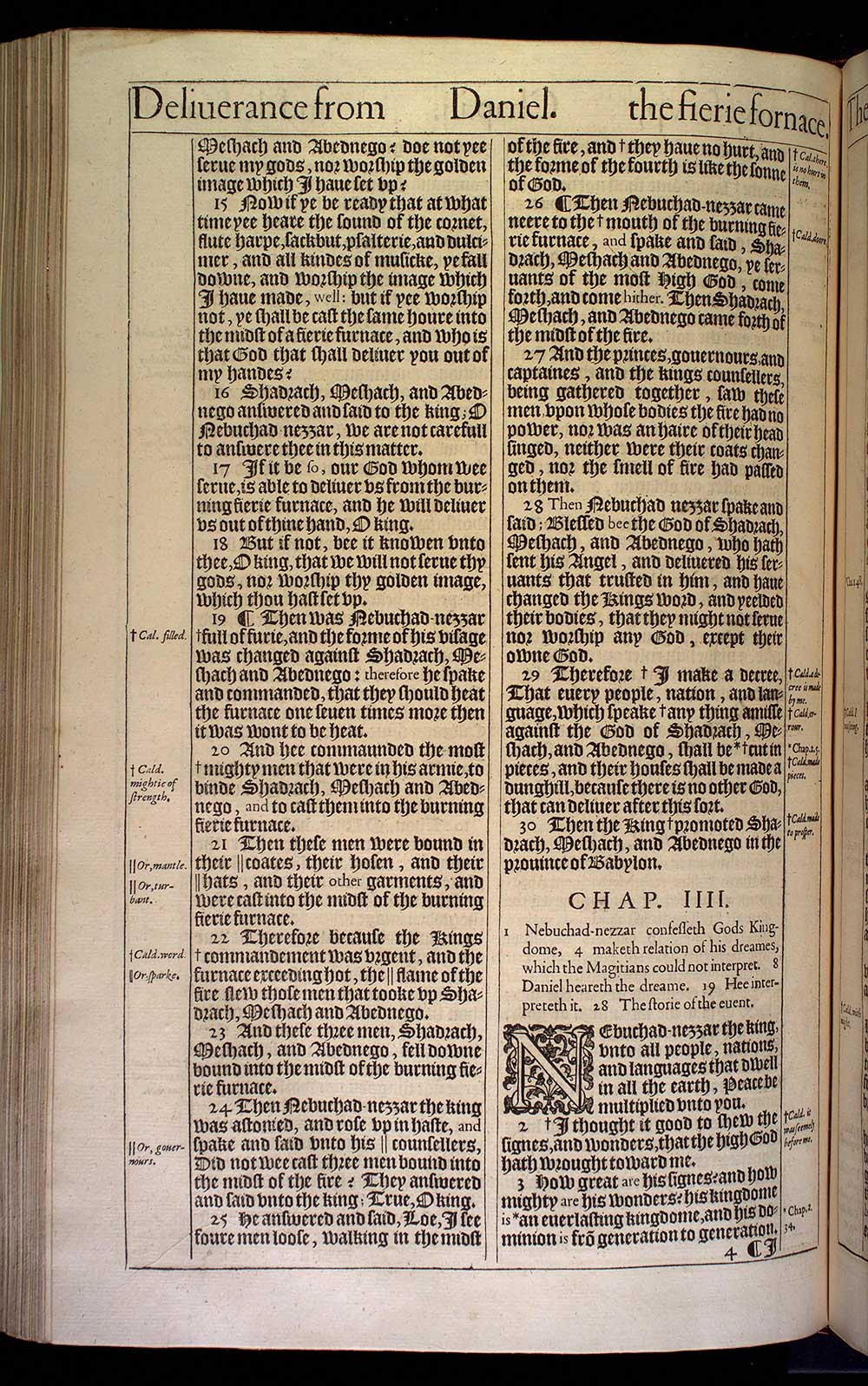 1 Nebuchad-nezzar dedicateth a golden image in Dura. 8 Shadrach, Meshach and Abednego are accused for not worshipping the image. 13 They being threatned, make a good confession. 19 God deliuereth them out of the furnace. 26 Nebuchad-nezzar seeing the miracle, blesseth God.

1Nebuchad-nezzar the king made an image of gold, whose height was threescore cubits, and þe breadth thereof sixe cubites: he set it vp in the plaine of Dura, in the prouince of Babylon.

2Then Nebuchad-nezzar the king sent to gather together the Princes, the Gouernours, and the Captaines, the Iudges, the Treasurers, the Counsellers, the Sherifes, and all the rulers of the Prouinces, to come to the dedication of the image which Nebuchad-nezzar the King had set vp.

4Then an herauld cryed aloud, To you it is commaunded, O people, nations, and languages,4

5That at what time yee heare the sound of the cornet, flute, harpe, sackbut, psalterie, dulcimer, and all kinds of musicke, yee fall downe, and worship the golden image that Nebuchad-nezzar the King hath set vp:5

6And who so falleth not down and worshippeth, shall the same houre bee cast into the middest of a burning fierie furnace.

7Therefore at that time, when all the people heard the sound of the cornet, flute, harpe, sackbut, psalterie, and all kindes of musicke, all the people, the nations, and the languages fell downe and worshipped the golden image, that Nebuchad-nezzar the King had set vp.

8¶ Wherefore at that time certaine Caldeans came neere, and accused the Iewes.

9They spake and sayd to the King Nebuchad-nezzar, O King, liue for euer.

10Thou, O King, hast made a decree, that euery man that shal heare the sound of the cornet, flute, harpe, sackbut, psalterie, and dulcimer, and all kinds of musicke, shall fall downe and worship the golden image:

11And who so falleth not downe & worshippeth, that he should be cast into the midst of a burning fierie furnace.

12There are certain Iewes whom thou hast set ouer the affaires of the prouince of Babylon, Shadrach, Meshach, and Abednego: these men, O King, haue not regarded thee, they serue not thy gods, nor worship the golden image, which thou hast set vp.12

13¶ Then Nebuchad-nezzar in his rage and furie commaunded to bring Shadrach, Meshach, and Abednego: then they brought these men before the King.

14Nebuchad-nezzar spake and said vnto them, Is it true, O Shadrach, Meshach and Abednego? doe not yee serue my gods, nor worship the golden image which I haue set vp?14

15Now if ye be ready that at what time yee heare the sound of the cornet, flute, harpe, sackbut, psalterie, and dulcimer, and all kindes of musicke, ye fall downe, and worship the image which I haue made, well: but if yee worship not, ye shall be cast the same houre into the midst of a fierie furnace, and who is that God that shall deliuer you out of my handes?

16Shadrach, Meshach, and Abednego answered and said to the king; O Nebuchad-nezzar, we are not carefull to answere thee in this matter.

17If it be so, our God whom wee serue, is able to deliuer vs from the burning fierie furnace, and he will deliuer vs out of thine hand, O king.

18But if not, bee it knowen vnto thee, O king, that we will not serue thy gods, nor worship thy golden image, which thou hast set vp.

19¶ Then was Nebuchad-nezzar full of furie, and the forme of his visage was changed against Shadrach, Meshach and Abednego: therefore he spake and commanded, that they should heat the furnace one seuen times more then it was wont to be heat.19

20And hee commaunded the most mighty men that were in his armie, to binde Shadrach, Meshach and Abednego, and to cast them into the burning fierie furnace.20

21Then these men were bound in their coates, their hosen, and their hats, and their other garments, and were cast into the midst of the burning fierie furnace.21

22Therefore because the Kings commandement was vrgent, and the furnace exceeding hot, the flame of the fire slew those men that tooke vp Shadrach, Meshach and Abednego.22

23And these three men, Shadrach, Meshach, and Abednego, fell downe bound into the midst of the burning fierie furnace.

24Then Nebuchad-nezzar the king was astonied, and rose vp in haste, and spake and said vnto his counsellers, Did not wee cast three men bound into the midst of the fire? They answered and said vnto the king; True, O king.24

25He answered and said, Loe, I see foure men loose, walking in the midst of the fire, and they haue no hurt, and the forme of the fourth is like the sonne of God.25

27And the princes, gouernours, and captaines, and the kings counsellers, being gathered together, saw these men, vpon whose bodies the fire had no power, nor was an haire of their head singed, neither were their coats changed, nor the smell of fire had passed on them.

28Then Nebuchad-nezzar spake and said; Blessed bee the God of Shadrach, Meshach, and Abednego, who hath sent his Angel, and deliuered his seruants that trusted in him, and haue changed the Kings word, and yeelded their bodies, that they might not serue nor worship any God, except their owne God.

29Therefore I make a decree, That euery people, nation, and language, which speake any thing amisse against the God of Shadrach, Meshach, and Abednego, shall be cut in pieces, and their houses shall be made a dunghill, because there is no other God, that can deliuer after this sort.29

30Then the King promoted Shadrach, Meshach, and Abednego in the prouince of Babylon.30