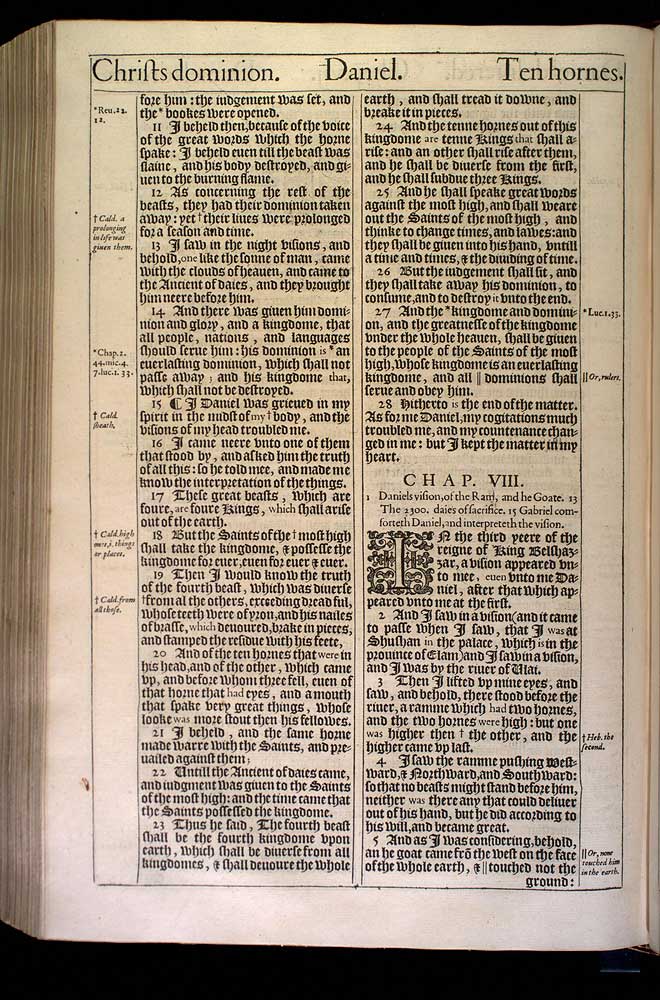 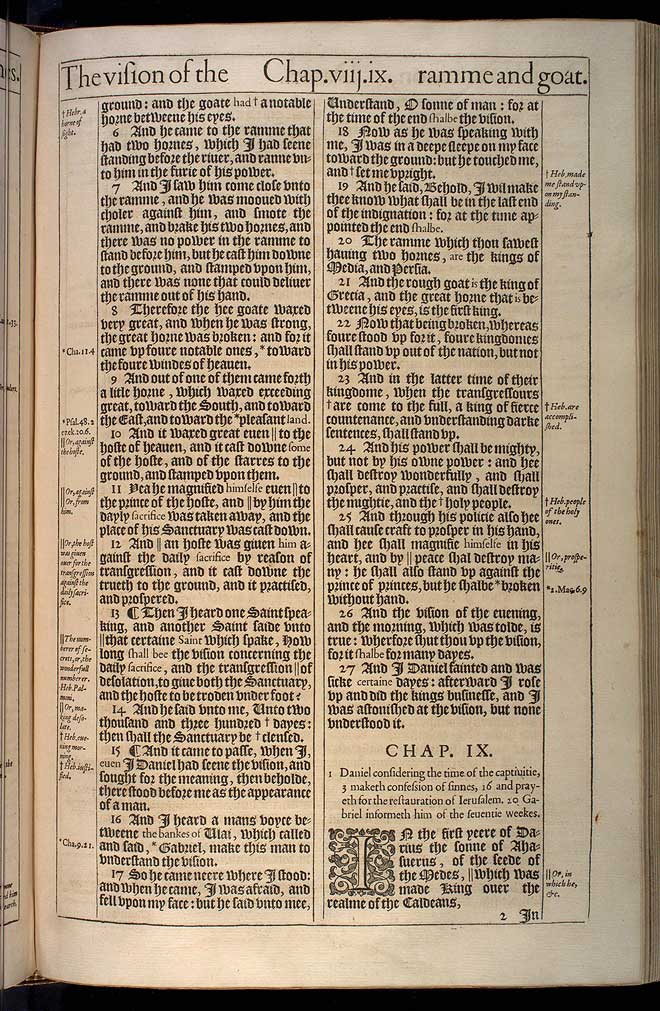 View this Daniel chapter 8 scan at a larger size

1 Daniels vision, of the Ram, and he Goate. 13 The 2300. daies of sacrifice. 15 Gabriel comforteth Daniel, and interpreteth the vision.

3 Then I lifted vp mine eyes, and saw, and behold, there stood before the riuer, a ramme which had two hornes, and the two hornes were high: but one was higher then the other, and the higher came vp last.3

4 I saw the ramme pushing Westward, & Northward, and Southward: so that no beasts might stand before him, neither was there any that could deliuer out of his hand, but he did according to his will, and became great.

5 And as I was considering, behold, an he goat came frō the west on the face of the whole earth, & touched not the ground: and the goate had a notable horne betweene his eyes.5

6 And he came to the ramme that had two hornes, which I had seene standing before the riuer, and ranne vnto him in the furie of his power.

8 Therefore the hee goate waxed very great, and when he was strong, the great horne was broken: and for it came vp foure notable ones, toward the foure windes of heauen.8

10 And it waxed great euen to the hoste of heauen, and it cast downe some of the hoste, and of the starres to the ground, and stamped vpon them.10

11 Yea he magnified himselfe euen to the prince of the hoste, and by him the dayly sacrifice was taken away, and the place of his Sanctuary was cast down.11

12 And an hoste was giuen him against the daily sacrifice by reason of transgression, and it cast downe the trueth to the ground, and it practised, and prospered.12

13 ¶ Then I heard one Saint speaking, and another Saint saide vnto that certaine Saint which spake, How long shall bee the vision concerning the daily sacrifice, and the transgression of desolation, to giue both the Sanctuary, and the hoste to be troden vnder foot?13

14 And he said vnto me, Unto two thousand and three hundred dayes: then shall the Sanctuary be clensed.14

15 ¶ And it came to passe, when I, euen I Daniel had seene the vision, and sought for the meaning, then beholde, there stood before me as the appearance of a man.

16 And I heard a mans voyce betweene the bankes of Ulai, which called and said, Gabriel, make this man to vnderstand the vision.16

17 So he came neere where I stood: and when he came, I was afraid, and fell vpon my face: but he said vnto mee, Understand, O sonne of man: for at the time of the end shalbe the vision.

18 Now as he was speaking with me, I was in a deepe sleepe on my face toward the ground: but he touched me, and set me vpright.18

19 And he said, Behold, I wil make thee know what shall be in the last end of the indignation: for at the time appointed the end shalbe.

20 The ramme which thou sawest hauing two hornes, are the kings of Media, and Persia.

21 And the rough goat is the king of Grecia, and the great horne that is betweene his eyes, is the first king.

22 Now that being broken, whereas foure stood vp for it, foure kingdomes shall stand vp out of the nation, but not in his power.

23 And in the latter time of their kingdome, when the transgressours are come to the full, a king of fierce countenance, and vnderstanding darke sentences, shall stand vp.23

25 And through his policie also hee shall cause craft to prosper in his hand, and hee shall magnifie himselfe in his heart, and by peace shal destroy many: he shall also stand vp against the prince of princes, but he shalbe broken without hand.25

26 And the vision of the euening, and the morning, which was tolde, is true: wherfore shut thou vp the vision, for it shalbe for many dayes.

27 And I Daniel fainted and was sicke certaine dayes: afterward I rose vp and did the kings businesse, and I was astonished at the vision, but none vnderstood it.