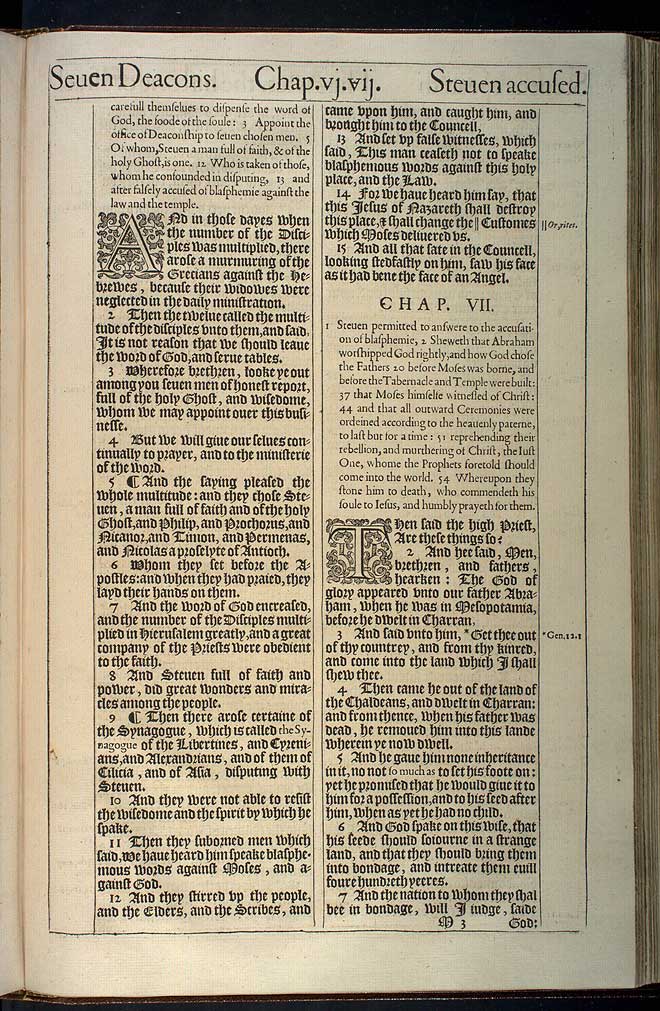 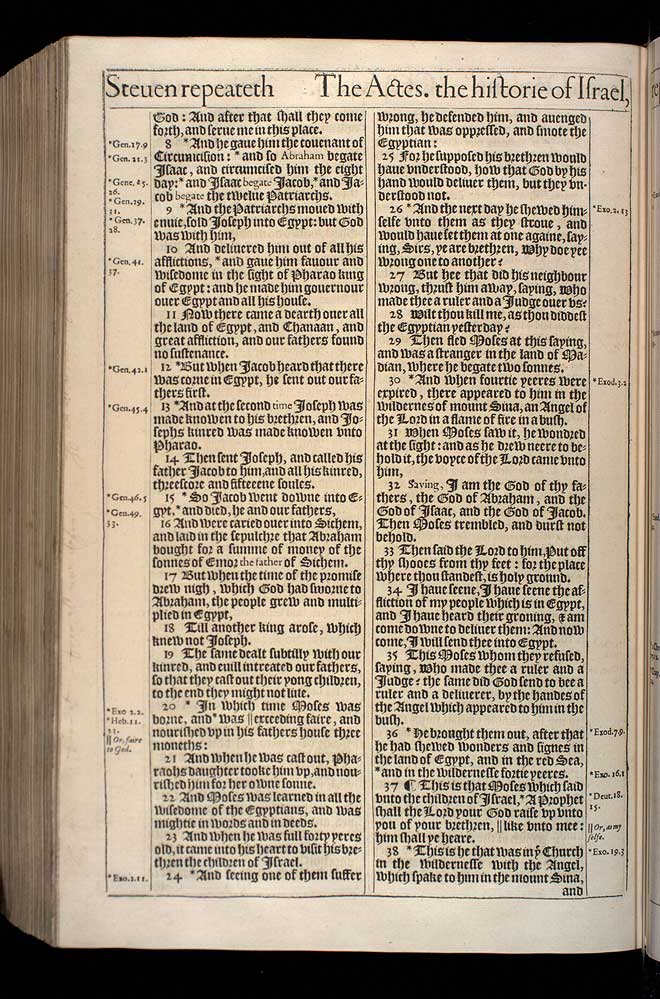 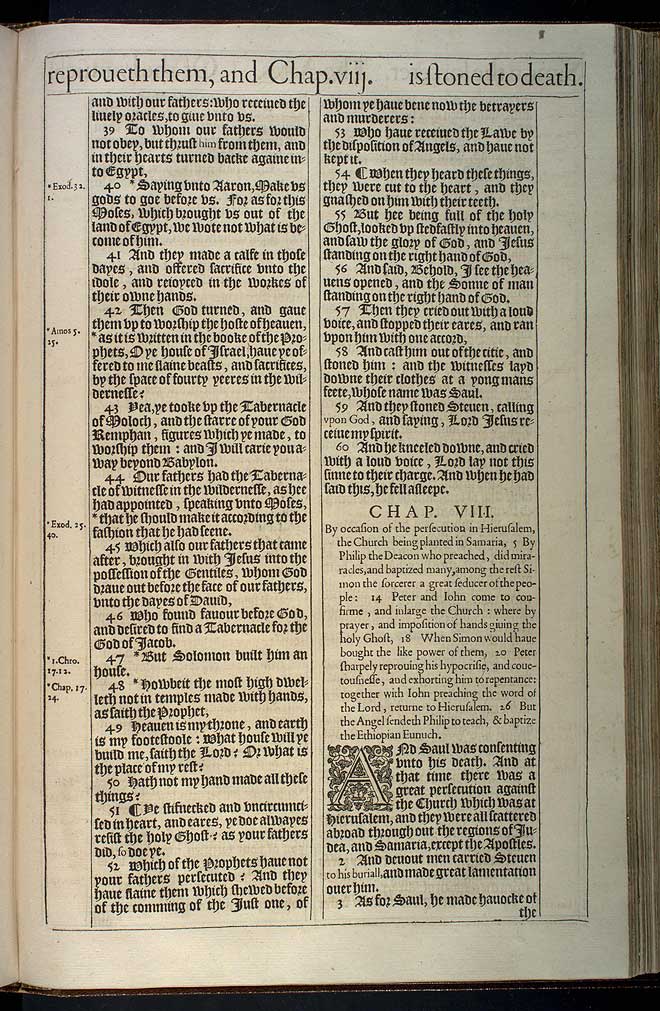 View this The Actes chapter 7 scan at a larger size

1 Steuen permitted to answere to the accusation of blasphemie, 2 Sheweth that Abraham worshipped God rightly, and how God chose the Fathers 20 before Moses was borne, and before the Tabernacle and Temple were built: 37 that Moses himselfe witnessed of Christ: 44 and that all outward Ceremonies were ordeined according to the heauenly paterne, to last but for a time: 51 reprehending their rebellion, and murthering of Christ, the Iust One, whome the Prophets foretold should come into the world. 54 Whereupon they stone him to death, who commendeth his soule to Iesus, and humbly prayeth for them.

1 Then said the high Priest, Are these things so?

2 And hee said, Men, brethren, and fathers, hearken: The God of glory appeared vnto our father Abraham, when he was in Mesopotamia, before he dwelt in Charran,

3 And said vnto him, Get thee out of thy countrey, and from thy kinred, and come into the land which I shall shew thee.3

4 Then came he out of the land of the Chaldeans, and dwelt in Charran: and from thence, when his father was dead, he remoued him into this lande wherein ye now dwell.

5 And he gaue him none inheritance in it, no not so much as to set his foote on: yet he promised that he would giue it to him for a possession, and to his seed after him, when as yet he had no child.

6 And God spake on this wise, that his seede should soiourne in a strange land, and that they should bring them into bondage, and intreate them euill foure hundreth yeeres.

7 And the nation to whom they shal bee in bondage, will I iudge, saide God: And after that shall they come forth, and serue me in this place.

8 And he gaue him the couenant of Circumcision: and so Abraham begate Isaac, and circumcised him the eight day: and Isaac begate Iacob, and Iacob begate the twelue Patriarchs.8

9 And the Patriarchs moued with enuie, sold Ioseph into Egypt: but God was with him,9

10 And deliuered him out of all his afflictions, and gaue him fauour and wisedome in the sight of Pharao king of Egypt: and he made him gouernour ouer Egypt and all his house.10

11 Now there came a dearth ouer all the land of Egypt, and Chanaan, and great affliction, and our fathers found no sustenance.

12 But when Iacob heard that there was corne in Egypt, he sent out our fathers first.12

14 Then sent Ioseph, and called his father Iacob to him, and all his kinred, threescore and fifteeene soules.

15 So Iacob went downe into Egypt, and died, he and our fathers,15

16 And were caried ouer into Sichem, and laid in the sepulchre that Abraham bought for a summe of money of the sonnes of Emor the father of Sichem.

17 But when the time of the promise drew nigh, which God had sworne to Abraham, the people grew and multiplied in Egypt,

18 Till another king arose, which knew not Ioseph.

19 The same dealt subtilly with our kinred, and euill intreated our fathers, so that they cast out their yong children, to the end they might not liue.

20 In which time Moses was borne, and was exceeding faire, and nourished vp in his fathers house three moneths:20

21 And when he was cast out, Pharaohs daughter tooke him vp, and nourished him for her owne sonne.

22 And Moses was learned in all the wisedome of the Egyptians, and was mightie in words and in deeds.

23 And when he was full forty yeres old, it came into his heart to visit his brethren the children of Israel.

24 And seeing one of them suffer wrong, he defended him, and auenged him that was oppressed, and smote the Egyptian:24

25 For he supposed his brethren would haue vnderstood, how that God by his hand would deliuer them, but they vnderstood not.

26 And the next day he shewed himselfe vnto them as they stroue, and would haue set them at one againe, saying, Sirs, ye are brethren, Why doe yee wrong one to another?26

27 But hee that did his neighbour wrong, thrust him away, saying, Who made thee a ruler and a Iudge ouer vs?

28 Wilt thou kill me, as thou diddest the Egyptian yesterday?

29 Then fled Moses at this saying, and was a stranger in the land of Madian, where he begate two sonnes.

30 And when fourtie yeeres were expired, there appeared to him in the wildernes of mount Sina, an Angel of the Lord in a flame of fire in a bush.30

31 When Moses saw it, he wondred at the sight: and as he drew neere to behold it, the voyce of the Lord came vnto him,

33 Then said the Lord to him, Put off thy shooes from thy feet: for the place where thou standest, is holy ground.

34 I haue seene, I haue seene the affliction of my people which is in Egypt, and I haue heard their groning, & am come downe to deliuer them: And now come, I will send thee into Egypt.

35 This Moses whom they refused, saying, Who made thee a ruler and a Iudge? the same did God send to bee a ruler and a deliuerer, by the handes of the Angel which appeared to him in the bush.

36 He brought them out, after that he had shewed wonders and signes in the land of Egypt, and in the red Sea, and in the wildernesse fortie yeeres.36

37 ¶ This is that Moses which said vnto the children of Israel, A Prophet shall the Lord your God raise vp vnto you of your brethren, like vnto mee: him shall ye heare.37

38 This is he that was in þe Church in the wildernesse with the Angel, which spake to him in the mount Sina, and with our fathers: who receiued the liuely oracles, to giue vnto vs.38

39 To whom our fathers would not obey, but thrust him from them, and in their hearts turned backe againe into Egypt,

40 Saying vnto Aaron, Make vs gods to goe before vs. For as for this Moses, which brought vs out of the land of Egypt, we wote not what is become of him.40

41 And they made a calfe in those dayes, and offered sacrifice vnto the idole, and reioyced in the workes of their owne hands.

42 Then God turned, and gaue them vp to worship the hoste of heauen, as it is written in the booke of the Prophets, O ye house of Israel, haue ye offered to me slaine beasts, and sacrifices, by the space of fourty yeeres in the wildernesse?42

43 Yea, ye tooke vp the Tabernacle of Moloch, and the starre of your God Remphan, figures which ye made, to worship them: and I will carie you away beyond Babylon.

44 Our fathers had the Tabernacle of witnesse in the wildernesse, as hee had appointed, speaking vnto Moses, that he should make it according to the fashion that he had seene.44

45 Which also our fathers that came after, brought in with Iesus into the possession of the Gentiles, whom God draue out before the face of our fathers, vnto the dayes of Dauid,

46 Who found fauour before God, and desired to find a Tabernacle for the God of Iacob.

48 Howbeit the most high dwelleth not in temples made with hands, as saith the Prophet,48

49 Heauen is my throne, and earth is my footestoole: What house will ye build me, saith the Lord? Or what is the place of my rest?

50 Hath not my hand made all these things?

51 ¶ Ye stifnecked and vncircumcised in heart, and eares, ye doe alwayes resist the holy Ghost? as your fathers did, so doe ye.

52 Which of the Prophets haue not your fathers persecuted? And they haue slaine them which shewed before of the comming of the Iust one, of whom ye haue bene now the betrayers and murderers:

53 Who haue receiued the Lawe by the disposition of Angels, and haue not kept it.

54 ¶ When they heard these things, they were cut to the heart, and they gnashed on him with their teeth.

55 But hee being full of the holy Ghost, looked vp stedfastly into heauen, and saw the glory of God, and Iesus standing on the right hand of God,

56 And said, Behold, I see the heauens opened, and the Sonne of man standing on the right hand of God.

57 Then they cried out with a loud voice, and stopped their eares, and ran vpon him with one accord,

58 And cast him out of the citie, and stoned him: and the witnesses layd downe their clothes at a yong mans feete, whose name was Saul.

60 And he kneeled downe, and cried with a loud voice, Lord lay not this sinne to their charge. And when he had said this, he fell asleepe.