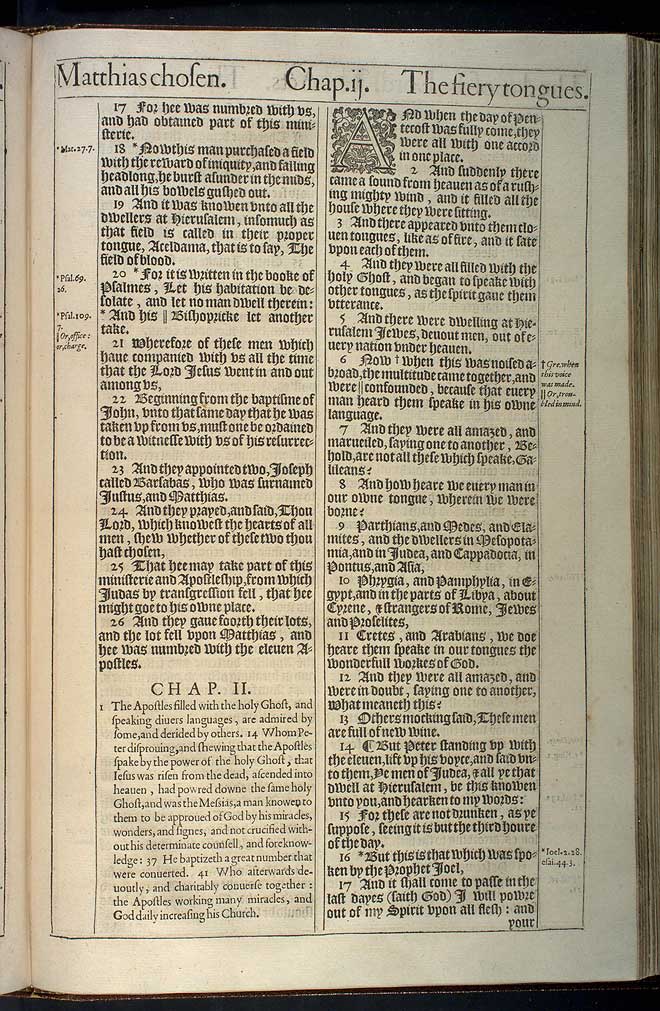 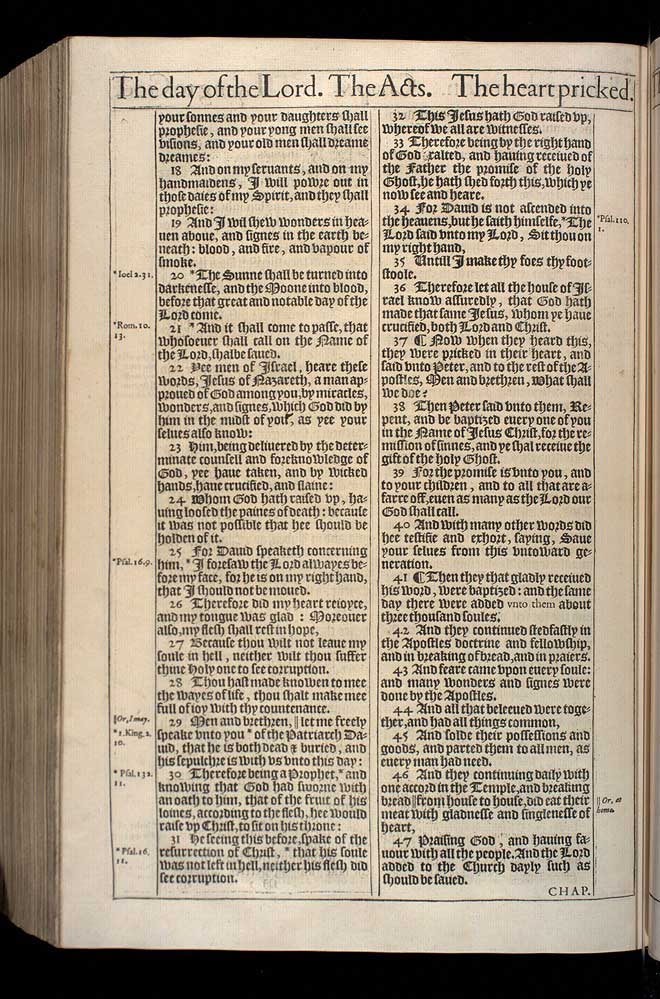 View this The Actes chapter 2 scan at a larger size

1 The Apostles filled with the holy Ghost, and speaking diuers languages, are admired by some, and derided by others. 14 Whom Peter disprouing, and shewing that the Apostles spake by the power of the holy Ghost, that Iesus was risen from the dead, ascended into heauen, had powred downe the same holy Ghost, and was the Messias, a man knowen to them to be approued of God by his miracles, wonders, and signes, and not crucified without his determinate counsell, and fore knowledge: 37 He baptizeth a great number that were conuerted. 41 Who afterwards deuoutly, and charitably conuerse together: the Apostles working many miracles, and God daily increasing his Church.

1 And when the day of Pentecost was fully come, they were all with one accord in one place.

2 And suddenly there came a sound from heauen as of a rushing mighty wind, and it filled all the house where they were sitting.

3 And there appeared vnto them clouen tongues, like as of fire, and it sate vpon each of them.

4 And they were all filled with the holy Ghost, and began to speake with other tongues, as the spirit gaue them vtterance.

5 And there were dwelling at Hierusalem Iewes, deuout men, out of euery nation vnder heauen.

6 Now when this was noised abroad, the multitude came together, and were confounded, because that euery man heard them speake in his owne language.6

7 And they were all amazed, and marueiled, saying one to another, Behold, are not all these which speake, Galileans?

8 And how heare we euery man in our owne tongue, wherein we were borne?

9 Parthians, and Medes, and Elamites, and the dwellers in Mesopotamia, and in Iudea, and Cappadocia, in Pontus, and Asia,

10 Phrygia, and Pamphylia, in Egypt, and in the parts of Libya, about Cyrene, & strangers of Rome, Iewes and Proselites,

11 Cretes, and Arabians, we doe heare them speake in our tongues the wonderfull workes of God.

12 And they were all amazed, and were in doubt, saying one to another, What meaneth this?

13 Others mocking said, These men are full of new wine.

14 ¶ But Peter standing vp with the eleuen, lift vp his voyce, and said vnto them, Ye men of Iudea, & all ye that dwell at Hierusalem, be this knowen vnto you, and hearken to my words:

15 For these are not drunken, as ye suppose, seeing it is but the third houre of the day.

16 But this is that which was spoken by the Prophet Ioel,16

The day of the Lord.

17 And it shall come to passe in the last dayes (saith God) I will powre out of my Spirit vpon all flesh: and your sonnes and your daughters shall prophesie, and your yong men shall see visions, and your old men shall dreame dreames:

18 And on my seruants, and on my handmaidens, I will powre out in those daies of my Spirit, and they shall prophesie:

19 And I wil shew wonders in heauen aboue, and signes in the earth beneath: blood, and fire, and vapour of smoke.

20 The Sunne shall be turned into darkenesse, and the Moone into blood, before that great and notable day of the Lord come.20

21 And it shall come to passe, that whosoeuer shall call on the Name of the Lord, shalbe saued.21

22 Yee men of Israel, heare these words, Iesus of Nazareth, a man approued of God among you, by miracles, wonders, and signes, which God did by him in the midst of you, as yee your selues also know:

23 Him, being deliuered by the determinate counsell and foreknowledge of God, yee haue taken, and by wicked hands, haue crucified, and slaine:

24 Whom God hath raised vp, hauing loosed the paines of death: because it was not possible that hee should be holden of it.

25 For Dauid speaketh concerning him, I foresaw the Lord alwayes before my face, for he is on my right hand, that I should not be moued.25

26 Therefore did my heart reioyce, and my tongue was glad: Moreouer also, my flesh shall rest in hope,

27 Because thou wilt not leaue my soule in hell, neither wilt thou suffer thine Holy one to see corruption.

28 Thou hast made knowen to mee the wayes of life, thou shalt make mee full of ioy with thy countenance.

29 Men and brethren, let me freely speake vnto you of the Patriarch Dauid, that he is both dead & buried, and his sepulchre is with vs vnto this day:29

30 Therefore being a Prophet, and knowing that God had sworne with an oath to him, that of the fruit of his loines, according to the flesh, hee would raise vp Christ, to sit on his throne:30

31 He seeing this before, spake of the resurrection of Christ, that his soule was not left in hell, neither his flesh did see corruption.31

32 This Iesus hath God raised vp, whereof we all are witnesses.

33 Therefore being by the right hand of God exalted, and hauing receiued of the Father the promise of the holy Ghost, he hath shed forth this, which ye now see and heare.

34 For Dauid is not ascended into the heauens, but he saith himselfe, The Lord said vnto my Lord, Sit thou on my right hand,34

35 Untill I make thy foes thy footstoole.

36 Therefore let all the house of Israel know assuredly, that God hath made that same Iesus, whom ye haue crucified, both Lord and Christ.

37 ¶ Now when they heard this, they were pricked in their heart, and said vnto Peter, and to the rest of the Apostles, Men and brethren, What shall we doe?

38 Then Peter said vnto them, Repent, and be baptized euery one of you in the Name of Iesus Christ, for the remission of sinnes, and ye shal receiue the gift of the holy Ghost.

39 For the promise is vnto you, and to your children, and to all that are afarre off, euen as many as the Lord our God shall call.

40 And with many other words did hee testifie and exhort, saying, Saue your selues from this vntoward generation.

41 ¶ Then they that gladly receiued his word, were baptized: and the same day there were added vnto them about three thousand soules.

42 And they continued stedfastly in the Apostles doctrine and fellowship, and in breaking of bread, and in praiers.

43 And feare came vpon euery soule: and many wonders and signes were done by the Apostles.

44 And all that beleeued were together, and had all things common,

45 And solde their possessions and goods, and parted them to all men, as euery man had need.

46 And they continuing daily with one accord in the Temple, and breaking bread from house to house, did eat their meat with gladnesse and singlenesse of heart,46

47 Praising God, and hauing fauour with all the people. And the Lord added to the Church dayly such as should be saued.