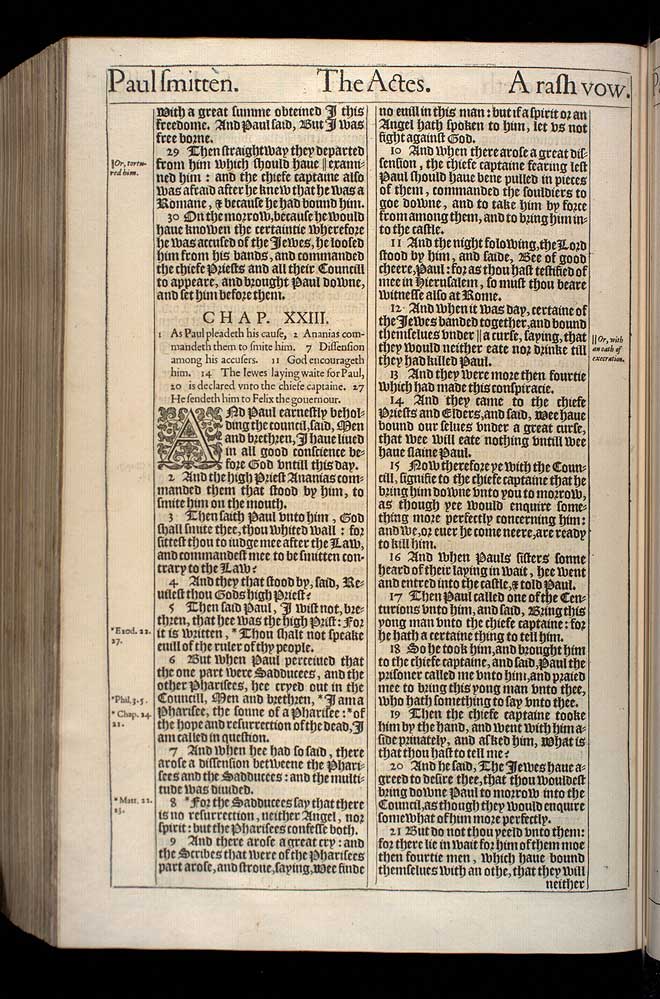 View this The Actes chapter 23 scan at a larger size

1 As Paul pleadeth his cause, 2 Ananias commandeth them to smite him. 7 Dissension among his accusers. 11 God encourageth him. 14 The Iewes laying waite for Paul, 20 is declared vnto the chiefe captaine. 27 He sendeth him to Felix the gouernour.

1 And Paul earnestly beholding the council, said, Men and brethren, I haue liued in all good conscience before God vntill this day.

2 And the high Priest Ananias commanded them that stood by him, to smite him on the mouth.

3 Then saith Paul vnto him, God shall smite thee, thou whited wall: for sittest thou to iudge mee after the Law, and commandest mee to be smitten contrary to the Law?

4 And they that stood by, said, Reuilest thou Gods high Priest?

5 Then said Paul, I wist not, brethren, that hee was the high Prist: For it is written, Thou shalt not speake euill of the ruler of thy people.5

6 But when Paul perceiued that the one part were Sadducees, and the other Pharisees, hee cryed out in the Councill, Men and brethren, I am a Pharisee, the sonne of a Pharisee: of the hope and resurrection of the dead, I am called in question.6

7 And when hee had so said, there arose a dissension betweene the Pharisees and the Sadducees: and the multitude was diuided.

8 For the Sadducees say that there is no resurrection, neither Angel, nor spirit: but the Pharisees confesse both.8

9 And there arose a great cry: and the Scribes that were of the Pharisees part arose, and stroue, saying, Wee finde no euill in this man: but if a spirit or an Angel hath spoken to him, let vs not fight against God.

10 And when there arose a great dissension, the chiefe captaine fearing lest Paul should haue bene pulled in pieces of them, commanded the souldiers to goe downe, and to take him by force from among them, and to bring him into the castle.

11 And the night folowing, the Lord stood by him, and saide, Bee of good cheere, Paul: for as thou hast testified of mee in Hierusalem, so must thou beare witnesse also at Rome.

12 And when it was day, certaine of the Iewes banded together, and bound themselues vnder a curse, saying, that they would neither eate nor drinke till they had killed Paul.12

13 And they were more then fourtie which had made this conspiracie.

14 And they came to the chiefe Priests and Elders, and said, Wee haue bound our selues vnder a great curse, that wee will eate nothing vntill wee haue slaine Paul.

15 Now therefore ye with the Councill, signifie to the chiefe captaine that he bring him downe vnto you to morrow, as though yee would enquire something more perfectly concerning him: and we, or euer he come neere, are ready to kill him.

16 And when Pauls sisters sonne heard of their laying in wait, hee went and entred into the castle, & told Paul.

17 Then Paul called one of the Centurions vnto him, and said, Bring this yong man vnto the chiefe captaine: for he hath a certaine thing to tell him.

18 So he took him, and brought him to the chiefe captaine, and said, Paul the prisoner called me vnto him, and praied mee to bring this yong man vnto thee, who hath something to say vnto thee.

19 Then the chiefe captaine tooke him by the hand, and went with him aside priuately, and asked him, What is that thou hast to tell me?

20 And he said, The Iewes haue agreed to desire thee, that thou wouldest bring downe Paul to morrow into the Council, as though they would enquire somewhat of him more perfectly.

21 But do not thou yeeld vnto them: for there lie in wait for him of them moe then fourtie men, which haue bound themselues with an othe, that they will neither eate nor drinke, till they haue killed him: and now are they ready, looking for a promise from thee.

22 So the chiefe captaine then let the yong man depart, and charged him, See thou tell no man, that thou hast shewed these things to me.

23 And he called vnto him two Centurions, saying, Make ready two hundred souldiers to goe to Cesarea, and horsemen threescore and ten, and spearemen two hundred, at the third houre of the night.

24 And prouide them beasts, that they may set Paul on, and bring him safe vnto Felix the gouernour.

25 And hee wrote a letter after this manner:

27 This man was taken of the Iewes and should haue beene killed of them: Then came I with an armie, and rescued him, hauing vnderstood that he was a Romane.

28 And when I would haue knowen the cause wherefore they accused him, I brought him foorth into their Council.

29 Whom I perceiued to be accused of questions of their lawe, but to haue nothing laide to his charge worthy of death or of bonds.

30 And when it was tolde me, how that the Iewes laid waite for the man, I sent straightway to thee, and gaue commandement to his accusers also, to say before thee what they had against him. Farewell.

31 Then the souldiers, as it was commaunded them, tooke Paul, and brought him by night to Antipatris.

32 On the morow, they left the horsemen to goe with him, and returned to the castle.

33 Who when they came to Cesarea, and deliuered the Epistle to the gouernour, presented Paul also before him.

34 And when the gouernour had read the letter, he asked of what prouince he was. And when he vnderstood that he was of Cilicia:

35 I will heare thee, said hee, when thine accusers are also come. And hee commanded him to be kept in Herods iudgement hall.